One country, two systems appears at risk as for Hong Kong residents as protests grew chaotic. Thousands of protesters marched on major highways attempting to storm the Legislative Council in protest of the extradition bill that would allow Hong Kong residents to be sent to the mainland. The situation remains tense as tear gas is being used by police and some protesters allegedly are growing violent, throwing various objects and bricks. The riot situation at the legislative complex appears contained, but it is unsure how long this will go into the night. The protest leader Jimmy Sham noted demonstrators will remain in the streets until the government withdraws the proposed bill.

Hong Kong is a city of slightly over seven million people, technically part of China but operating like a free nation that has free speech and rights to protests. If the proposed extradition bill gets passed, Beijing’s influence will continue to encroach on Hong Kong resident’s way of life. Last we heard from Chief Executive Carrie Lam was that it is still expected to move forward, though we have not heard from her since Monday.

China appears to be increasing its hold and Democratic ways of life could be ending in Hong Kong. China’s crackdowns have worked before and its hard to imagine a situation where this does not end poorly for Hong Kong without international help.

Market turbulence could grow for Hong Kong markets as business investors are adamant in not having this extradition bill passed. The Hang Seng fell 1.7% and could see further weakness as investors become skeptical of Beijings influence. The Japanese yen has a modest bid all night, while the Australian dollar softened on the day as over 100,000 Aussies reside in Hong Kong.

The protests over the extradition bill is delivering a squeeze in local lending rates, which makes it more expensive to borrow the Hong Kong dollar in the front end, which has strengthened HKD today. The Hong Kong currency is at its strongest levels since December. Expectations are for HKD to return to the weaker part of the band after the funding squeeze ends. The Hang Seng Index is the worst performing index, closing -1.7% on the day.
The Hong Kong Monetary Authority (HKMA) noted their currency and money markets are operating in an orderly manner. 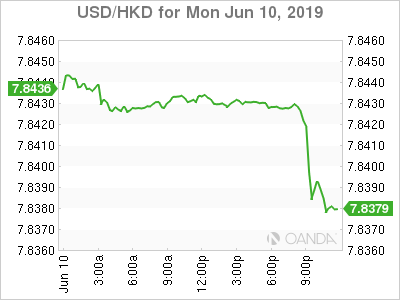 Boris Johnson kicked off his partly leadership campaign and assuaged cable traders after stating, “I am not aiming for a no-deal Brexit outcome.” The candidate that was supposed to be the one leading the charge for a hard Brexit appears to be trying to win over votes with a slightly softer stance. The front-runner dodged questions about his inflammatory banter and spotty track record.
Cable regained firm footing and is attempting at recapturing the highs made last week. 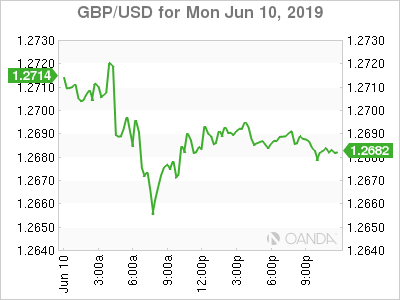 Crude prices steadily declined overnight following yesterday’s API report that showed American crude inventories rose 4.85 million barrels last week. Cushing was up 2.37 million barrels and if the EIA report confirms the rise, that would be the biggest gains since February. If the EIA report confirms another strong build, oil prices will struggle to stabilize here as supplies appear ample. Another key part of the global outlook on oil will depend on OPEC and allies decision on what to do with production cut levels. Many OPEC oil ministers remain confident production cuts will be extended, but nothing should be priced in until we have firm commitments from the Russians and Iranians. 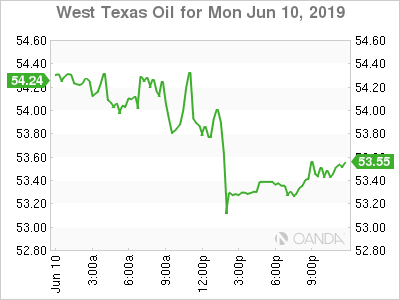 Gold prices remain supported on trade uncertainty, rising Fed rate cut bets, which could coincide with a pullback with the US dollar. 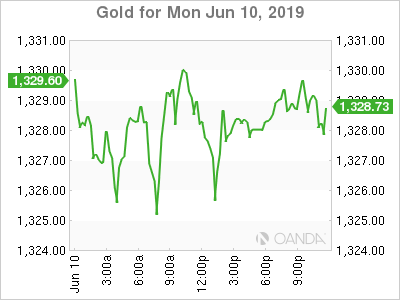 Gold on the defensive, below $1870 level amid stronger USD

Gold struggled to capitalize on the previous day’s modest bounce from two-month lows. The prevalent USD buying interest capped the upside for the dollar-denominated commodity. A turnaround in the equity markets, sliding US bond yields might help limit deeper losses.

The Russian Roskomnadzor (the Federal Service for Supervision of Communications, Information, Technology, and Mass Media) added the cryptocurrency exchange Binance to the blacklist.