Central banks’ purchases and repatriations of gold have caught our attention once again. In October, Serbia’s central bank bought 9 tons of gold, following in the footsteps of many other central banks that have been adding to their gold reserves recently, including Russia, Hungary, and Poland.

Nine tons may seem to be a modest purchase, but the transaction was worth $438 million at $1,503 an ounce. And it has raised Serbia’s gold reserves to 30.4 tons, constituting about 10 percent of the country’s total reserves. Importantly, the National Bank of Serbia could carry on with its purchases, as it got clear message from the Serbian President, Aleksandar Vucic to continue boosting gold reserves in order to be better prepared for the economic crisis: “I think we’ll continue doing that because of what we see in which direction the crisis in the world is moving,” Vucic told the press.

This purchase should be seen from broader perspective. Central banks added 156 tons of gold to their reserves in Q3, according to the World Gold Council.Although it was significantly lower than the record levels of Q3 2018, central bank buying remained healthy. Actually, central banks are on track to be net gold buyers for 10 consecutive years, as the chart below shows. And the trend is likely to continue in the coming years due to heightened global tensions, slowdown in economic growth, negative bond yields, and trade wars. 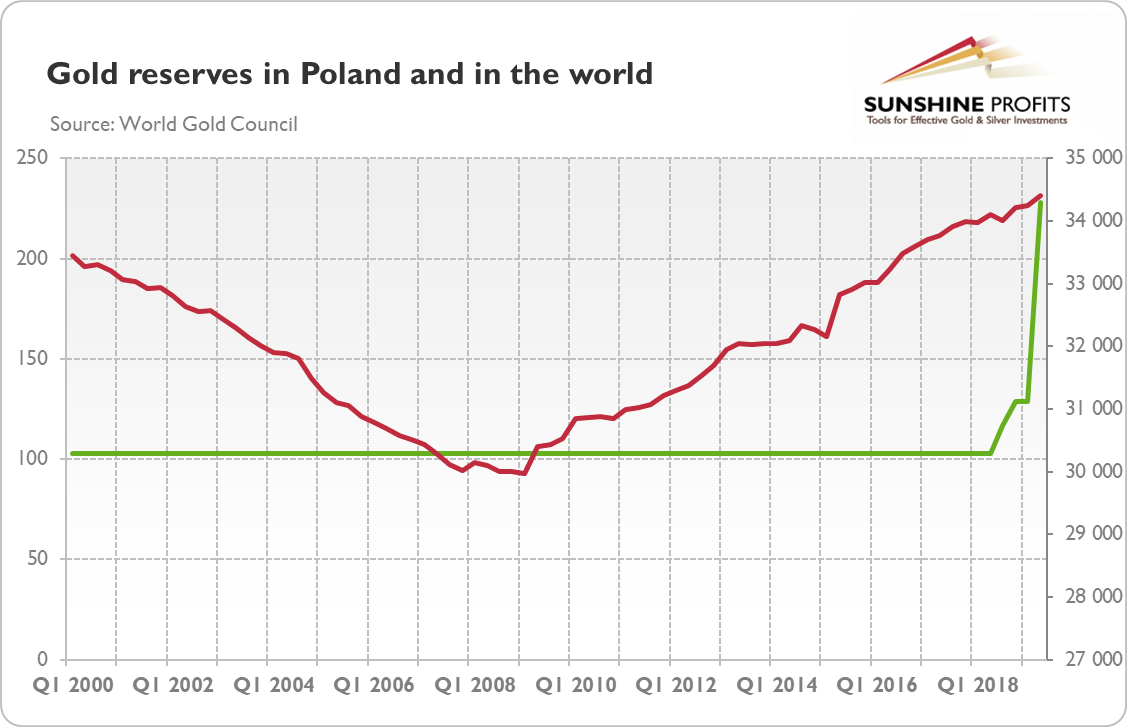 Moreover, in September, Germany’s central bank gold holdings have risen for the first time this century. Given that Bundesbank is still quite influential, its reversal may encourage other central banks to buy gold more decisively. September’s outright purchase of the precious metal comes two years after Bundesbank repatriated 583 tons of gold worth about $31 billion.

When we discuss repatriation of gold, we have to mention Poland, which has rapidly boosted its bullion reserves over the past two years by 125 tons to 228.6 tons, as one can see in the chart above. And yesterday, the country has brought back around 100 tons of gold from the Bank of England’s vaults in London. It means that around half of Poland’s holdings in the UK were transferred back to the National Bank of Poland’s vault in Warsaw. Adam Glapinski, the central banks’ governor, commented the move as follows:

We have completed the procedure of bringing our gold to the country. In this connection, I can say that we brought Poles’ gold home (...) We have as much gold in reserves as other industrialized and civilized countries (…) Our reserves are at an appropriate level, they are sufficiently high and safe, which does not mean that they cannot grow further. I think that in a few years the NBP may increase its reserves again. (…) The value of the imported metal is 18 billion zlotys, said the NBP president. If we sold gold recently bought now at current prices, we would have multi-billion profit (…) The gold symbolizes the strength of the country.