There is a sense that major markets are taking a breather after a few weeks of trading where Brexit this and trade dispute that have been pulling markets here and there. Attention is turning towards the big three central banks that hold their latest monetary policy meetings in the next week. Today the focus is on the outlook for the Eurozone and the ECB. The Eurozone economy has been hit by the double whammy of the global slowdown, accelerated by the US/China dispute and having the uncertainty of Brexit hanging over its head. The growth outlook has suffered as a result. Flash PMIs are out today and are expected to show the continued stagnation of economic output. A composite PMI a hairs breadth into expansion territory last month (at 50.1) is only expected to be marginally improved but still suggesting the need for support. The ECB meeting today is likely to be more about justifying the package of easing action taken at the last meeting six weeks ago. We do not expect any fireworks in what will be the final meeting for Mario Draghi before his eight year tenure as ECB President draws to a close. Expect one final plea to Eurozone governments to help with the heavy lifting and engage fiscal stimulus. This is unlikely to be a meeting therefore that can break the consolidation that has set in across major markets. Bond yields have stabilised, whilst the euro, yen and gold are all muted. Another Brexit policy shift, or significant development in the trade story may shake markets from consolidation in front of next week’s Fed meeting. The ECB though will be little more than a fond farewell to Draghi. 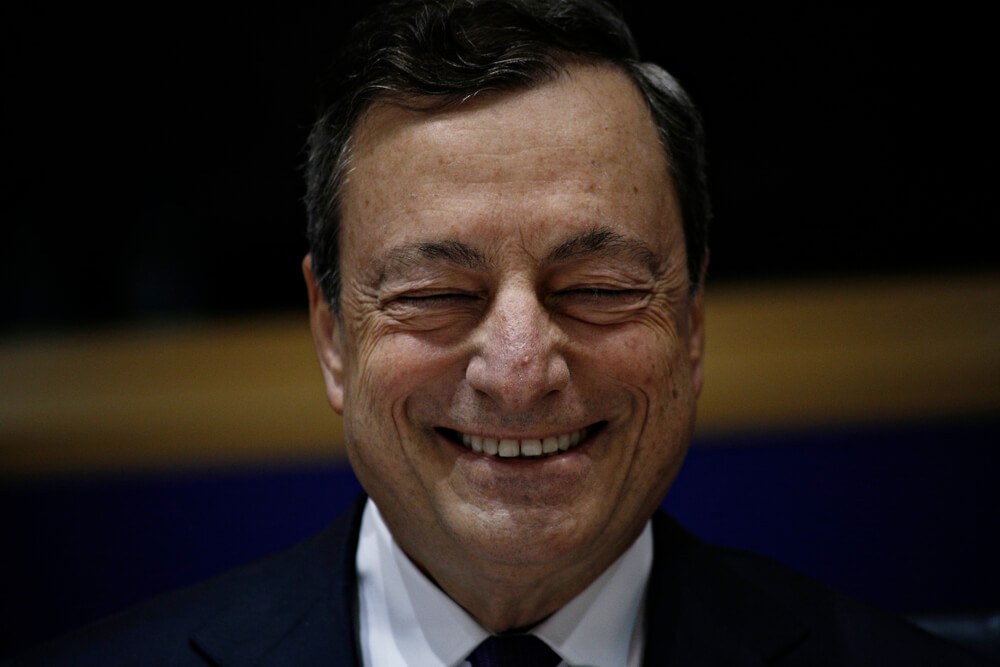 Wall Street closed in marginal positive territory last night with the S&P 500 continuing to fluctuate around 3000, climbing +0.3% into the close of 3005. US futures are all but flat today. Asian markets were again mixed, with the Nikkei +0.6% whilst the Shanghai Composite was -0.3%. In Europe, FTSE futures are around the flat line, whilst DAX futures are mildly higher by +0.2%. In forex, there is a continuation of the consolidation of recent sessions, although a very slight negative bias has formed with AUD and NZD slipping, whilst JPY is a mild outperformer. In commodities, the recent tick higher on gold has held ground, whilst oil is just given back some of yesterday’s sharp gains.

Chart of the Day – NZD/USD

The Kiwi has been performing well now for about a week now. Having already seen positive momentum divergences in early October, a recovery has developed. A breakout above $0.6350 implies 150 pips of gains (towards $0.6500) and has placed the market on course to at least test key resistance of the long term pivot band $0.6450/$0.6480. Corrections are now a chance to buy for this move. The bulls are in an increasingly solid position with the RSI around 60 whilst Stochastics are strong and MACD lines are rising towards a position above neutral and at a twelve week high. Effectively this all suggests that the $0.6450 resistance will at least now come under pressure. Initial resistance is at $0.6435 but a close above $0.6480 would be a key outlook changing break. The strength of momentum suggests that corrections are now a chance to buy. Yesterday’s low at $0.6385 is initial support with the neckline at $0.6350 is now key. 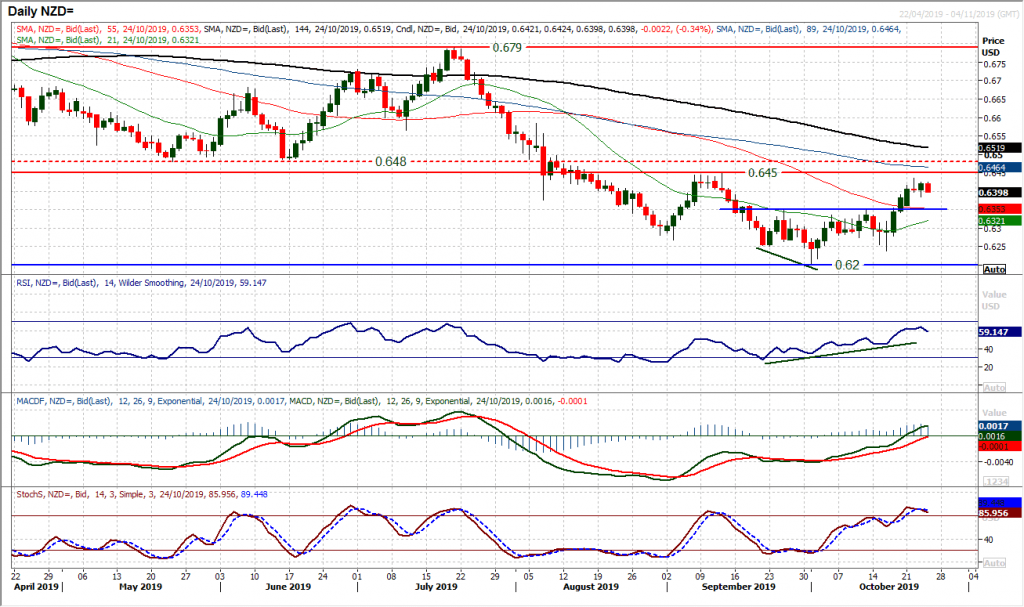 Finally we have seen oil finding some positive traction in a move that looks ready to end the period of stagnation. A surprise EIA inventory drawdown helped to boost sentiment on WTI to pull the market through key near term resistance at $54.95. A strong bull candle into the close and the market at a three week high. Suddenly a far more constructive momentum outlook too, with the Stochastics pulling into multi-month highs, MACD lines finding traction and RSI above 50. Holding this move will now be the key test for today. The previous recovery just over a week ago dissipated as fast as it arose. So holding the $54.95 breakout will be important. Another close above the 38.2% Fibonacci retracement at $55.75 opens 50% Fib at $57.20.

As if to reiterate the air of consolidation across major markets yesterday, the Dow continues to sit in a holding pattern that has developed through this week. A doji candlestick (open and close at the same level, well within 1 tick of a pure doji) denotes a lack of conviction. We have spoken recently of the importance of the Dow holding on to the support band 26,655/26,695 and this continues to be the case. This is becoming perhaps even more important now, given the fact that for four sessions in a row now the low has formed a shade above this support between 26,745/26,785. Momentum indicators reflect the holding pattern too, with RSI and MACD lines a shade above neutral. Hourly momentum has become neutralised too, so we wait for the next move. Initial resistance around 26,945 comes in below the main near to medium term barrier 28.040/27,120. A close under 26,655 suggests growing negative pressure. 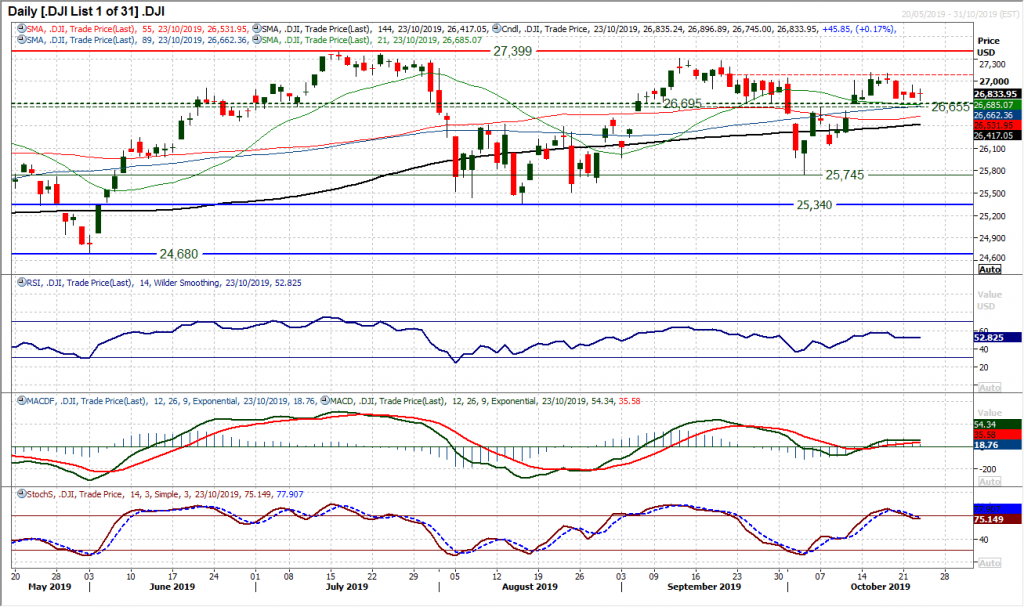 EUR/USD clings to modest gains above 1.1600 after EU and German PMI

EUR/USD is trading in the positive territory around mid-1.1600s in the early European session with the dollar struggling to find demand amid the improving market mood. The data from Germany and the EU showed that the business activity in the private sector expanded at a soft pace in October.