Risk appetite has had a double shot in the arm, resulting in a significant swing on markets. Donald Trump is talking up the prospects of a deal with China as the trade negotiations appear to be progressing well. The extent of an agreement is yet to be revealed (and given previous form, all could yet still be scuppered before the Chinese delegation leaves Washington tonight). However, traders are suddenly hopeful that the outcome could be something that cancels the planned tariff hikes of next week, whilst laying the pathway for further subsequent agreement. Market reaction has been to sell safety. Government bond yields have spiked higher, the yen is a primary underperformer in the forex majors (along with dollar weakness too) and gold is also lower. The euro and the commodity majors have gained, with equities and oil also higher. In the spirit of deal potential, yesterday also had a rare positive in the Brexit uncertainty. Crunch talks between Irish Taoiseach (Prime Minister) Varadkar and UK Prime Minister Johnson left both leaders talking up the prospects of a Brexit deal before the 31st October deadline. The subsequent reaction has been for sterling to drive for its biggest daily gain versus the dollar since March. The question is now whether the prospects of both these deals/agreements can be followed to fruition. If so then this will be a game changer across many markets. We will know by this evening about the US/China potential, for Brexit though, the path is far more rocky and the potential for disappointment remains high.

Wall Street closed solidly higher again last night with the S&P 500 +0.6% at 2938, whilst US futures are another +0.3% higher today. Asian markets have taken the ball and run with it, as the Nikkei is +1.1% and Shanghai Composite +1.1%. The mood in Europe is more mixed. Continued sterling gains are a drag on FTSE on the negative correlation, with FTSE futures -0.5%, whilst DAX futures are a solid +0.4% higher. On forex majors, there is still a risk positive bias, with EUR gains and JPY underperformance, along with continued recovery on GBP. In commodities, there is an interesting reaction on gold this morning, where the market is holding on and building support c. $4 higher. Oil has continued to run higher (c. +2%) amidst recovery in the demand outlook from the constructive US/China talks.

Arguably the most important data point for the week on the economic calendar today. With household spending accounting for 70% of the US economy, consumer surveys are extremely telling. The prelim reading of Michigan Sentiment for October is at 1500BST and there is a forecast decline to 92.0 (from 93.2 at the final September reading). However, also watch for the Current Conditions component which is expected to slip mildly to 107.5 (from 108.5 in September) and the Expectations component which is expected to drop to 81.7 (from 83.4).

Chart of the Day – EUR/JPY

The outlook for risk appetite is making a move for sustainable improvement. A second strong bull candle from EUR/JPY has set up the market to break through resistance of a downtrend that has been in place since April. Another positive open today shows that the bulls remain on the front foot. Yesterday’s breakout above a pivot (for the past couple of months) at 118.50 pulls the market to a two week high and set up for continued recovery now. This comes with some sharp improvements in momentum indicators as bull cross buy signals on both Stochastics and MACD lines have been seen, whilst RSI is now rising strongly above 50. The breakout above 118.50 effectively opens the key resistance at 120.00. This pivot line also now becomes a near term basis of support with the hourly chart showing a near term “buy zone” for the recovery between 118.15/118.50. 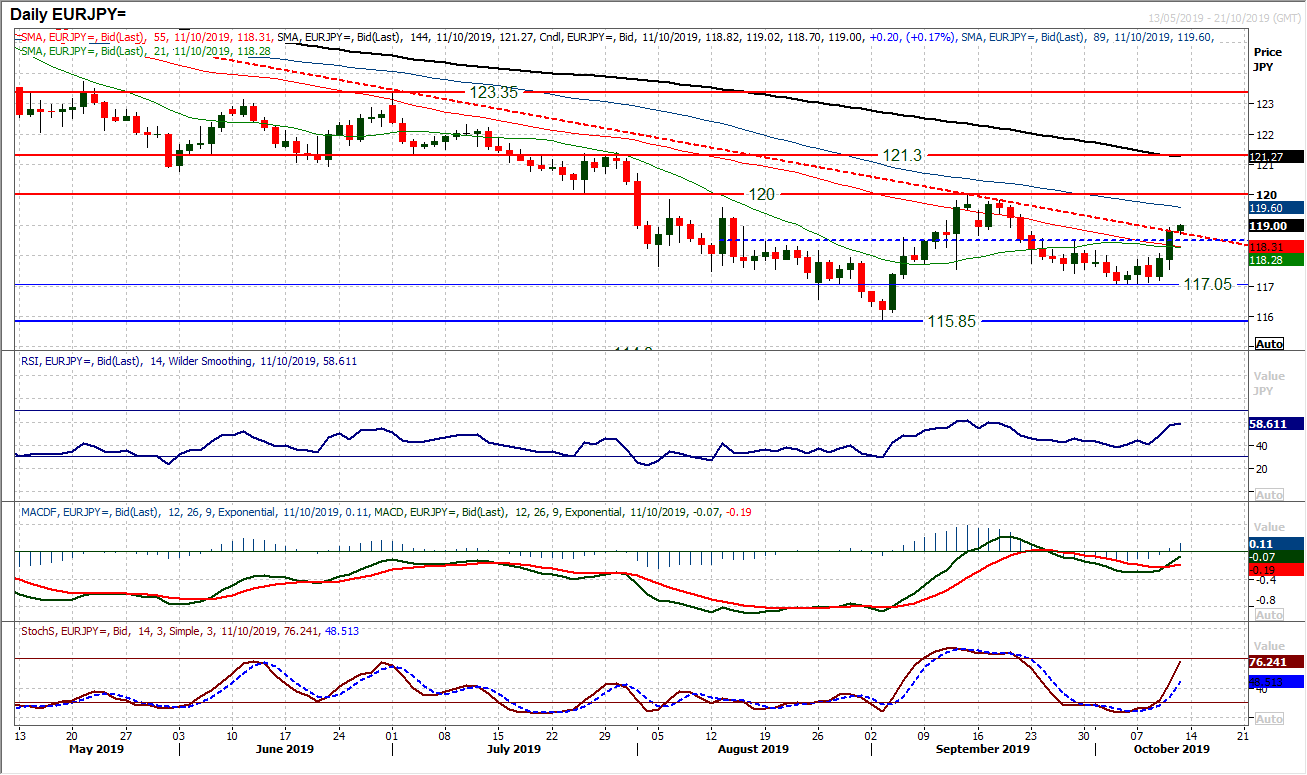 There has been a notable choppy consolidation on oil for the past week. This has created a number of candles with long shadows (failed intraday moves) and lacking conviction. However, yesterday’s bounce really looked to put some direction into the market. A bounce from just above the key support band $50.50/$51.00 has helped to bolster this as a medium term floor. However, with a decisive close higher, the bulls are making a move. This has continued this morning on an intraday move above the resistance $53.90/$54.00 and if this can be closed above, the bulls would really be advancing. It would effectively complete a small $3.00 base pattern and imply recovery potential towards $57.00. Momentum seems to be turning the corner too, with Stochastics advancing, along with RSI and MACD lines also bottoming. The hourly chart shows $53.70/$54.00 is a near term buy zone. The importance of a positive resolution to the US/China trade talks cannot be underestimated with the progression of the recovery outlook. 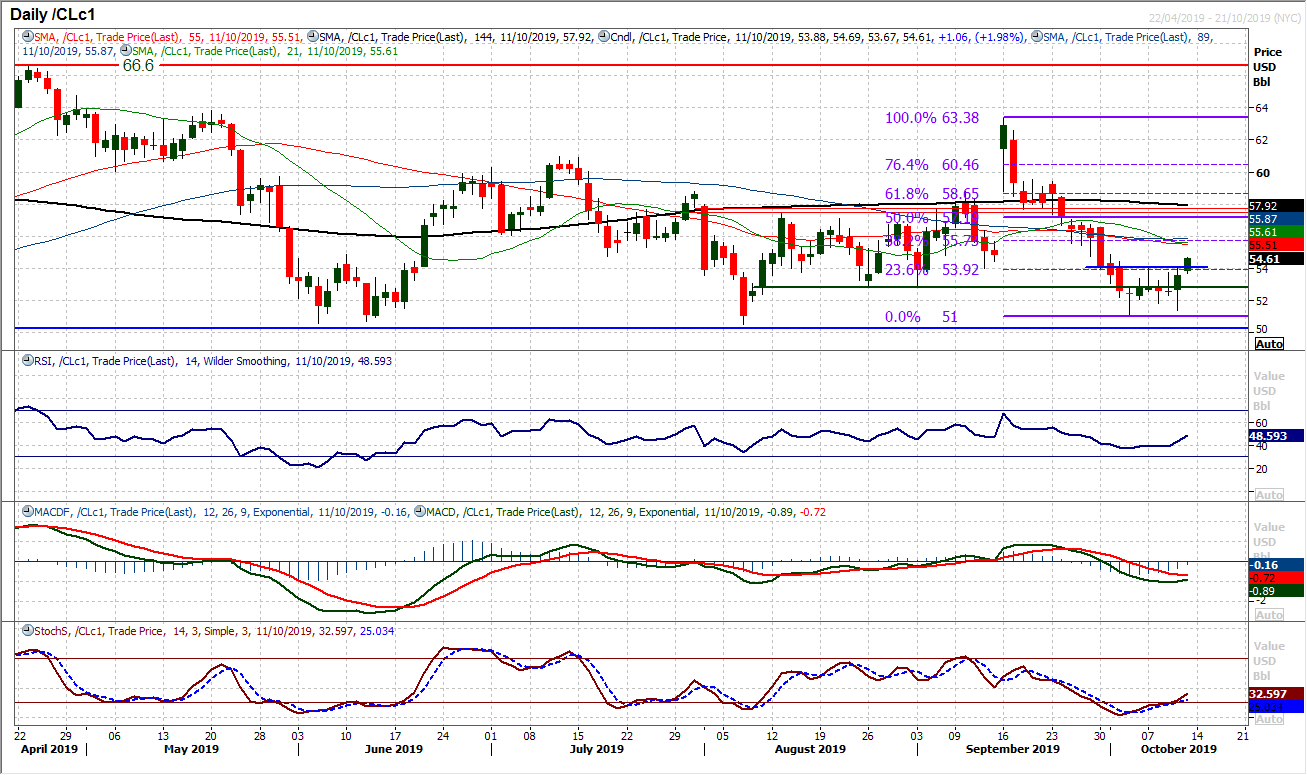 Signs of light in the US/China trade talks and the Dow has jumped again. Any (mini) trade deal that results in no further tariff escalation will send the Dow higher. On a technical basis, the resistance at 26,655/26,695 is the barrier to gains and if this can be breached then the bulls will be back in the driving seat. There is still an element of caution with the momentum indicators (RSI still under 50, MACD lines flat around neutral), but a near term break through resistance would be confirmed if these conditions ticked higher. The subsequent resistance test would be 27,045/27,080. The hourly chart shows there is still a degree of caution, with near term ranging outlook (between 35/65 on hourly RSI) still present. Initial support at 26,315 protects the 26,140 higher low. 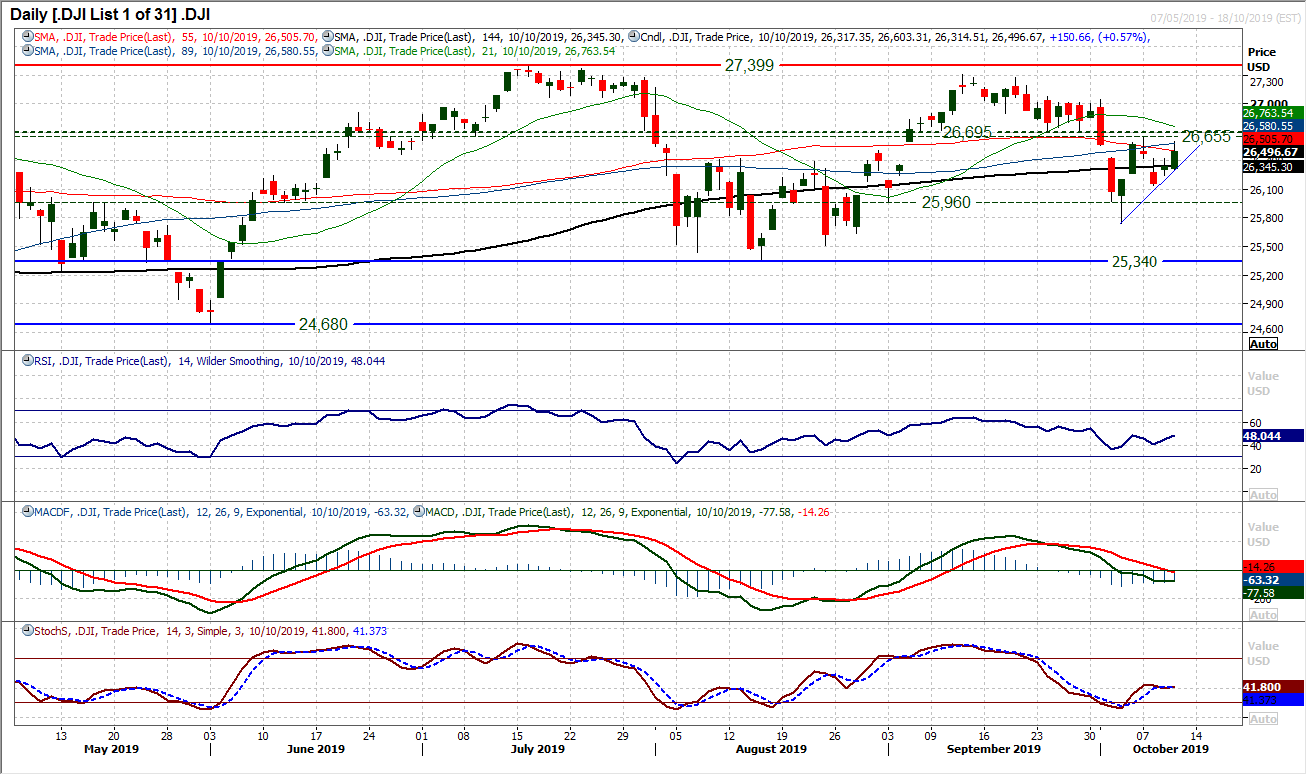