In the last six weeks, it has been one-day traffic for GBPAUD - and that is down. On 11th October, the Pound was riding high at 1.869 in typical mid-market rates. Then the Brexit storm hit and the market became jittery that like some members – or ex members – of the cabinet, British MPs would reject Theresa May’s controversial EU agreement and that either a no-deal Brexit or political chaos might follow. Fast forward to the start of December and the Pound hit a monthly low of 1.721 against the Aussie Dollar and dropping closer to the 1.717 annual low. At the same time, the Australian Dollar has strengthened on news that the United States and China are suspending their trade war.

The latest G20 meeting in Argentina provided the ideal opportunity for US President Donald Trump and Chinese President Xi Jinping to negotiate a pause for breath in the trade wars. The two sides agreed to put any new action on hold for 90 days, so the two sides could talk further. Mr Trump has been planning to increase tariffs on $200 billion of Chinese goods from 10% to 25% in the new year. Of course, this only temporarily prevents new tariffs, it doesn’t mean the trade disputes between the two superpowers will necessarily be solved for good. As The Australian newspaper sums it up, “The truce is welcome, but the trade war is far from finished.” So far, the US has imposed trade duties on $250 billion of Chinese goods in retaliation for “unfair trade practices. China has itself added import duties on US products worth $110 billion. The issue is important for the Australian economy, as China is its largest trading partner for both imports and exports and Australia is China's sixth largest trading partner.

For the 28th month in a row, the Reserve Bank of Australia has kept its official cash rate at 1.5%. Governor, Philip Lowe, says, although the Australian economy is performing well, there are worries over international trade. In the December monetary policy statement, he explains, “The global economic expansion is continuing and unemployment rates in most advanced economies are low.

There are, however, some signs of a slowdown in global trade, partly stemming from ongoing trade tensions. Growth in China has slowed a little, with the authorities easing policy while continuing to pay close attention to the risks in the financial sector. Globally, inflation remains low, although it has increased due to the earlier lift in oil prices and faster wages growth. A further pick-up in core inflation is expected given the tight labour markets and, in the United States, the sizeable fiscal stimulus.” The Australian economy is performing well, with GDP growth set to average around 3.5% this year and next, before slowing in 2020 due to lower exports. Business conditions are positive and non-mining business investment is expected to increase. Higher levels of public infrastructure investment are also supporting the economy, as is growth in resource exports, Mr Lowe says. However, growth in household income remains low, debt levels are high and some asset prices have declined. “Australia's terms of trade have increased over the past couple of years and have been stronger than earlier expected. This has helped boost national income. Most commodity prices have, however, declined recently, with oil prices falling significantly.

The Australian Dollar remains within the range that it has been in over the past two years on a trade-weighted basis.” The outlook for the labour market remains positive and the unemployment rate is at 5%, the lowest in six years, he says. Inflation remains low and stable with CPI inflation at 1.9% over the last year and in underlying terms inflation was 1.75% per cent. Inflation is expected to gradually pick up over the next couple of years, reaching 2.25% per cent in 2019 and slightly higher the following year. As a result of the comments, the Australian Dollar fell back a little against the Pound to around 1.735.

Here we are in December 2018, with less than four months to go until Britain is scheduled to leave the European Union, and the drama - and drag on the Pound - continues. The good news is that the European Union has finally approved a Brexit deal. The 585-page withdrawal agreement covers citizens’ rights, the ‘divorce’ payment and the a the controversial ‘backstop’ for the Irish border, which seeks to retain an open border on Ireland in the event of a no-deal Brexit.

The bad news is that the arrangements are deeply unpopular with MPs, who are voting on the measure on Tuesday 11th December. Since the terms of the agreement, were first made public, there have been a handful of resignations by Government ministers. In addition, disgruntled Conservative MPs have been calling for a vote of no confidence in Mrs May, which can be actioned when 48 letters are sent to the backbench body, the 1922 committee.

But at time of writing, the rebels remain short of their target and Theresa May clings on to power. Ahead of the Parliamentary vote, she is touring the country, desperately trying to drum up support for her deal in the face of doubt that enough MPs will support it. If the deal fails, it is anybody’s guess what happens next. Mrs May could amend the agreement and with the support of the EU and the cabinet, bring back a revised deal to parliament.

On the other hand, Britain could leave the European Union on 29th March 2019 with no agreement. In a worst-case scenario, a disorderly Brexit could see a huge 8% decline in the UK economy, warns Bank of England Governor, Mark Carney, along with a 25% fall in the value of the Pound and a decline in house prices of almost one-third.

If more unhappy MPs write to the 1922 committee, Theresa May could face that no-confidence vote and a leadership contest, or she could resign and call a general election. In the meantime, some MPs are angry that at time of writing, only a summary of the government’s legal advice concerning the Brexit deal has been published, rather than the full guidance. MPs previously voted to require the government to lay before Parliament "any legal advice in full", but the government says the advice is confidential and so a summary should suffice.

Some opposition MPs have suggested that the rare contempt of Parliament proceedings should be started unless the full legal advice is published and an inquiry is underway. Now, following an inquiry from Scottish MPs, the European Court of Justice's advocate general has said the UK should be able to cancel its withdrawal from the European Union without the consent of other member states. The view is a non-binding opinion from advocate general Manuel Campos Sanchez-Bordona and the European Court of Justice will deliver its opinion later. Meanwhile, a feisty five-day Brexit debate is underway in Parliament ahead of the MPs vote. With all that going on, it’s no wonder the Pound has plummeted against the Australian Dollar.

There has been a large sell off from the 1.87 high to 1.7200 over the past six weeks, with GBPAUD out of the bottom of the uptrend towards the end of November 2018. It then picked up a support line, which coincided with the lows seen in June and August.

After the disappointing Australian GDP results this week and tentative tone from the RBA, the Australian Dollar has lost 2.5% over the last 48 hours. As a result, GBPAUD has broken back into the channel it has been in since early 2017.

The move should run out of steam in about half a cents time, at around 1.7750, which would then see a retracement lower. The test will be whether it can hold above 1.7600 in the run up to the UK parliament vote on Tuesday 11th December.

The downside target on more Brexit debate developments is initially 1.72 and then if things really do fall apart we will see a move down to the 1.70 onto 1.6570. For AUD buyers, I would be inclined to place a stop loss order below 1.7500 if you are wanting to see if there is a favourable outcome from the UK parliamentary vote, which could see a rally back up through 1.7750. 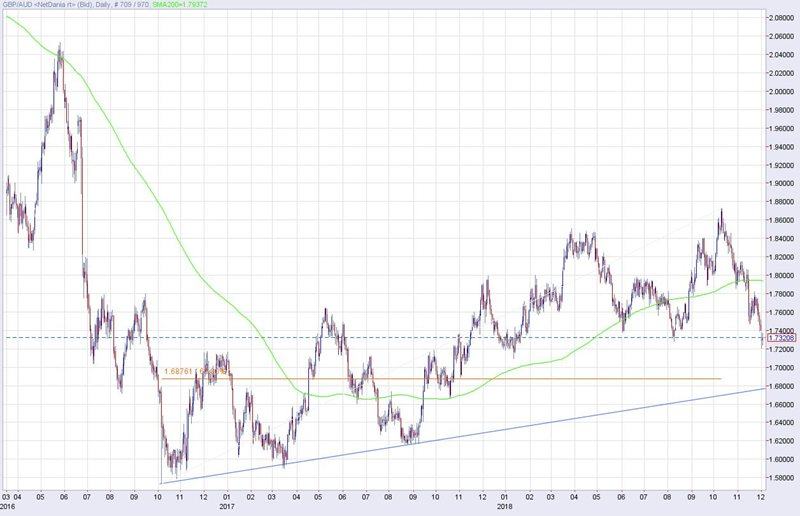