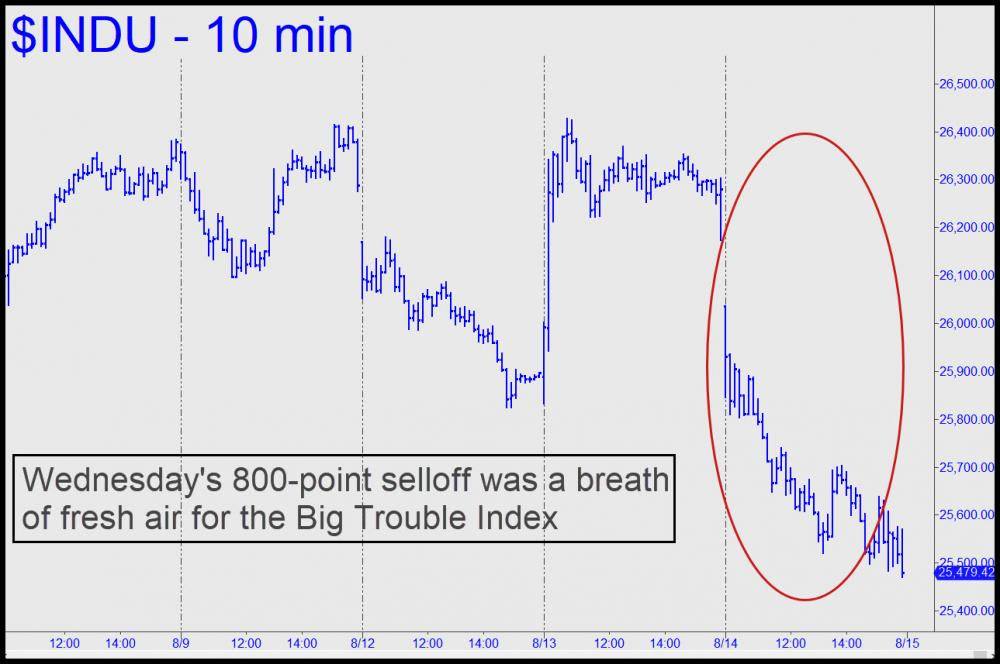 Earlier this week, Rick’s Picks created a ‘Big Trouble Index’ (BTI) to track a bearish bet that looks like it can’t lose. I was having trouble getting to sleep, concerned that Hong Kong would be invaded and erupt in flames overnight, sending stocks around the world into a catastrophic plunge. I still believe this is possible, but I also believe that a dozen other events, some of them black swans whose details lie beyond imagining, could cause such a crash. A short squeeze on the dollar, for instance. This has never occurred, and it may sound like an odd way for a decade of global prosperity to end. But I regard it as inevitable and believe it could happen literally at any time, even before the next sunrise. It could be triggered by something as seemingly minor as the failure of a small bank that happens to be a cog in the quadrillion dollar derivatives market. It would not be the first time the problems of a tiny bank threatened the stability of the global banking system, as the Cypriot financial crisis did in 2012-13.

In any event, more palpable concerns such as the tariff war, the quickening implosion of Europe’s economy and Beijing’s threats against Hong Kong, are already causing large amounts of capital to seek the safety of gold and U.S. Treasury paper. I hesitate to say that both are no-brainer investments right now simply because in the guru business, expressions of certitude are just asking for trouble. But I am strongly convinced nonetheless that a small investment in bullion and Treasury debt, along with a short position in U.S. stocks, will grow very significantly over the remainder of the year and in 2020.  You can track it as follows, based on prices that obtained at 12:48 a.m. Tuesday, August 13, when the idea came to me in the dead of night:

The position took a drubbing on Tuesday when news came out that Trump would delay until the end of December steep tariffs on laptops and cellphones that represent $80 billion of Chinese goods imported into the U.S.  This was good news but hardly deserving of the 531-point wilding spree in the Dow Industrials that followed.  However, the Rick’s Picks BTI Index reversed and went in-the-money with Wednesday’s 800-point Dow cascade. At the moment, mid-evening Wednesday, the position is showing a theoretical profit of about $2800, most of it from the bullish T-Bond position. We will trade around the Big Trouble Index in the months ahead and report on it from time to time, presumably as it becomes even more profitable. If you want to follow along, check the home page occasionally, or the Rick’s Picks Facebook page.