The Japanese yen has been one of the worst performing currencies year-to-date. The rampant vaccine distribution and signs of economic recovery across the globe has made safe-haven assets less appealing, but the divergence in monetary policies seems to have been a bigger burden for the yen. While several central banks are cautiously preparing markets for a policy shift towards the tightening era, the Bank of Japan (BoJ) has no real motivation to lift its super accommodative policy settings yet. This Friday, the Bank is expected to reaffirm its dovish stance (tentative time), likely leaving the yen near its recent low levels.

Uninspiring policy meetings, where interest rates are held steady and  asset purchases stable are all too common for the Bank of Japan. This is not expected to change this week when the Bank announces its policy decision on Friday even if the frenzy of tapering and the woes of inflation keep vexing key central banks across the globe.

From the European Central Bank to the Bank of England and the Fed, policymakers have been making a lot of noises recently about when they should begin the bond tapering and rate hike process as the acceleration in CPI figures warrants some caution although no panic has been noticed among policymakers yet, and the base effect story seems to be the ideal excuse for the phenomenon right now. The same, however, cannot be said for the BoJ.

Unlike other central banks, the BoJ has no reason to think about thinking about tapering because the old deflation problem is still intact, and the price growth is not expected to burgeon any time soon despite the disruptions from the pandemic. Besides, BoJ Governor Kuroda admitted in April that the 2.0% inflation goal will not be achievable when his term ends in 2023.

Note that Japan has also been left out of the global bond yield rally since the Bank’s yield curve control policy, which aims to keep the 10-year government bond yield stable between -0.25% and 0.25% as of March, is negating sharp upside pressures.

Vulnerable to COVID infections ahead of olympic games

What is more important, several regions including the capital and host of the summer Olympics, Tokyo, and Osaka are still in a state of emergency as only 4.0% of the population have been vaccinated as of the end of May due to the delayed regulatory approval of vaccines. The government is preparing to lift restrictions on June 20 amid the falling infection cases, though the reopening phase will likely be partial given that hospitals are still swamped with Covid patients in some areas and the Olympic games due on July 23 – September 5 could contribute to the spreading of the virus.

Hence, with GDP growth figures likely being heavily squeezed by covid restrictions in the second quarter, despite the astonishing expansion in exports, and the Bank lagging well behind its economic targets, talks of monetary tightening could be a far cry in Japan, even if discussions are picking up steam in other advanced economies. 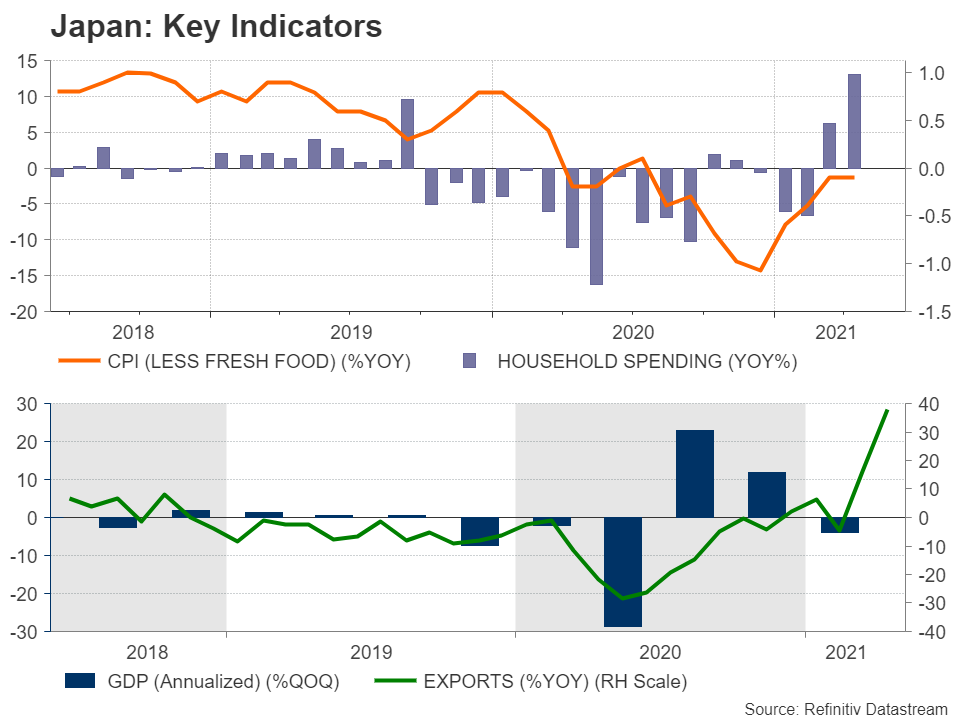 Instead, rumours are circulating that policymaker could approve a six-month extension of the pandemic corporate lending facilities to aid struggling businesses while keeping policy settings unchanged on Friday. Nevertheless, the reaction in the yen is expected to be negligible as always, with the currency likely getting its cues from the FOMC policy meeting and the movement in the dollar a few days earlier on Wednesday if Fed policymakers manage to send any serious tightening signals.

Given the lack of inflation and the domestic vulnerable virus conditions, the BoJ could be the last among central banks to take its foot off the accelerator and that could add extra pressure on the yen in the coming months, especially if the Fed officially terminates the stimulus phase earlier than expected.

Still, a depressed yen is not a trouble for the central bank yet as it can help Japan’s technology exporters boost demand for their products in international markets.

Looking at dollar/yen, the pair maintains its short-term upward trajectory above an ascending trendline although the 110.32 resistance continues to block the way towards the one-year high of 110.95. Should the bulls gear above the latter, the next barrier could pop up within the 111.35 – 112.21 territory, where the price peaked in 2020.