S&P 500 reversed from fresh ATHs as spiking yields sent tech packing. Value didn‘t soar but held up considerably better – still, stock bulls are getting on the defensive. Markets have interpreted the Powell nomination as a hawkish choice. I‘ve written the prior Monday:

(…) the Fed is still printing a huge amount of money on a monthly basis, and it remains questionable how far in tapering plans execution they would actually get – I see the risks to the real economy coupled with persistently high inflation as rising since the 2Q 2022 (if not since Mar already, but most pronounced in 2H 2022.

Inflation hasn‘t moved to the Fed‘s sights, and yesterday‘s reaction in yields and precious metals is a bit too harsh. While rates are on a rising path as I‘ve written yesterday, precious metals overreacted. True, the bullish argument for the dollar stepped to the fore as the yield differential between the U.S. and the rest of the world got more positive, and at the same time, various yield spreads keep compressing. That‘s a reflection of less favorable incoming economic data. Just as much as Friday‘s reaction was about corona economic impact projections, yesterday‘s one was about monetary policy anticipation.

Inflation expectations though barely budged – the decline doesn‘t count as trend reversal. CPI isn‘t done rising, and the more forward-looking incoming data (e.g. producer prices) would confirm there is more to come. All in all, it looks like precious metals (and to smaller degree commodities), are giving Powell the benefit of the doubt, which I view to be leading to disappointment over the coming months. Should Powell heed the markets‘ will, the real economy would weaken dramatically, forcing him to make a sharp dovish turn – and he would, faster than he flipped since getting challenged in Dec 2018.

We‘re experiencing an overreaction in real assets – as stated yesterday:

(…) the Fed would have to reverse course once the tapering effects start biting some more – not now, with still more than $100bn monthly addition. Cyclicals and commodities that had massively appreciated vs. a year ago (oil doubled), are feeling the pinch of fresh economic activity curbing speculation in spite of the polar shift of U.S. strength in the energy of 2019 and before. Begging the OPEC+ to increase production might not do the trick, and with so much inflation already in (and still to come), the key investment theme is of real assets strength.

Precious metals have broken out, are no longer an underdog, and the inflation data will not decelerate for quite a few months still. And even as they would, it would come at a palpable cost to the real economy, and the resolute fresh stimulus action wouldn‘t be then far off. As I wrote in Apr 2020, it‘s about the continuous stimulus that‘s the go-to response anytime the horizon darkens, for whatever reason. Wash, rinse, repeat. 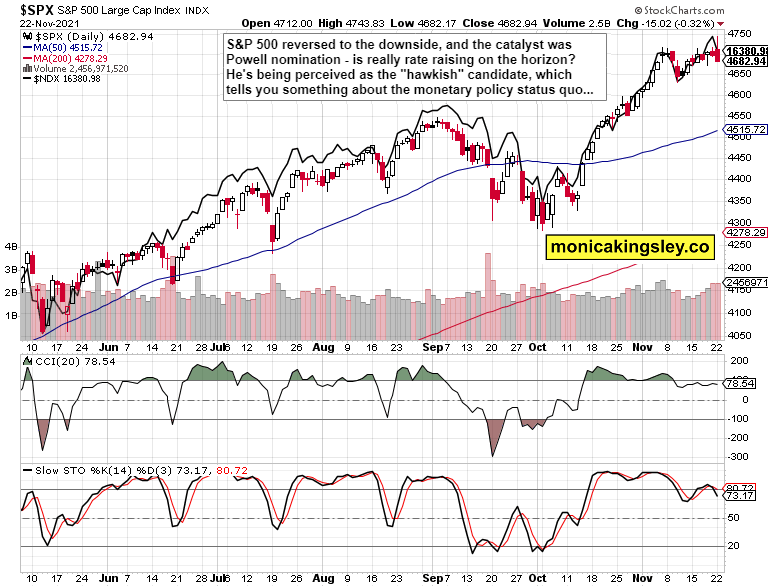 S&P 500 bulls lost the momentary upper hand, and value recovery isn‘t yet strong enough to carry it forward. A less heavy move in bonds – temporary yields stabilization – would be needed to calm down stock market nerves.

Treasuries held up best, and that‘s characteristic of very risk-off sentiment. The low volume in HYG isn‘t a promise of much strength soon returning.

Precious metals turned sharply lower, and haven‘t stabilized yet. Bond market pressures are keenly felt even though inflation expectations didn‘t follow with the same veracity. The next few days will be really telling. 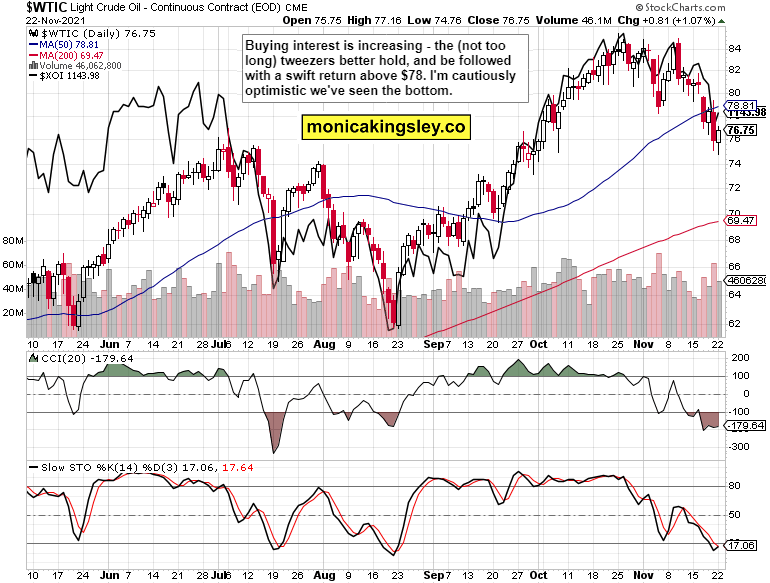 Crude oil bulls have made a good movie, and more strength needs to follow. The fact that it would be happening when the dollar is strengthening, and many countries are tapping their strategic reserves, bodes well for black gold‘s recovery. 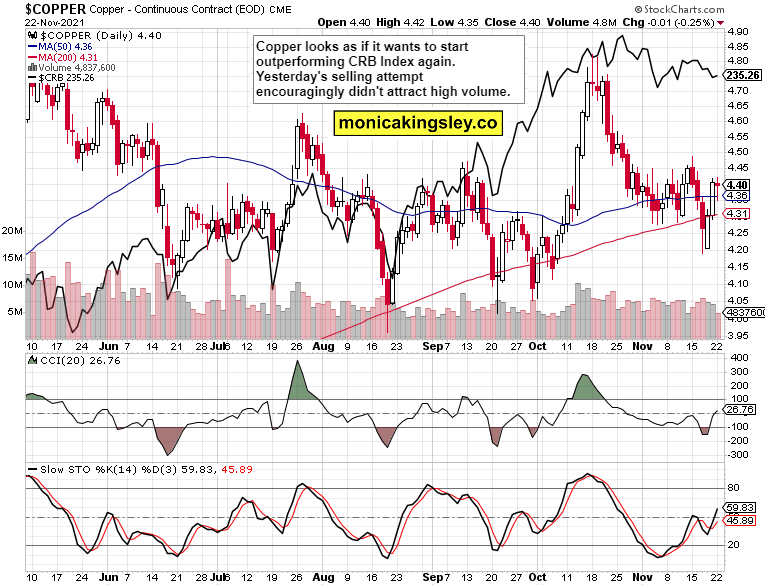 Copper springboard building goes on, and the CRB Index isn‘t tellingly yielding – the hawkish Fed bets better be taken with an (at least short-term) pinch of salt. 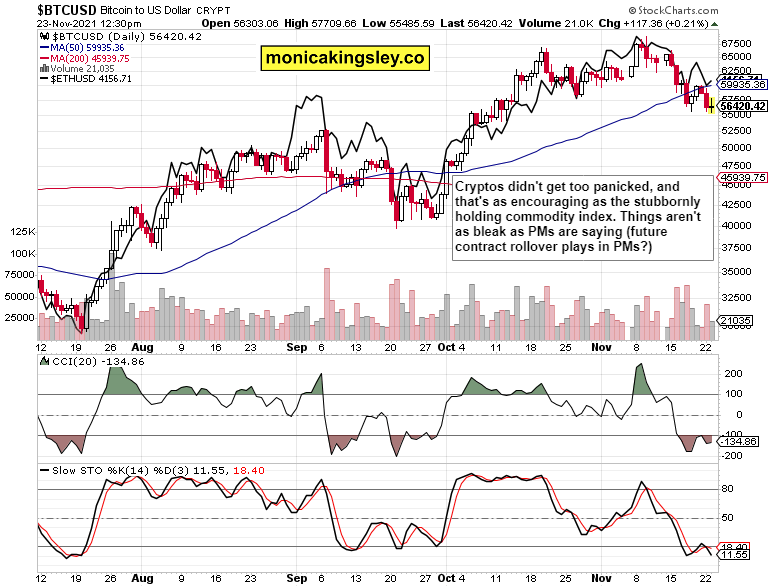 Bitcoin and Ethereum are still going sideways, and today‘s resilience is a good omen – across the board for risk assets.

S&P 500 bulls need tech to come alive again, and odds are it would with a reprieve in spiking yields. While bond markets are getting it right, yesterday‘s fear in corporate bonds was a bit too much – the Fed isn‘t yet in a position to choke off the real economy through slamming on the breaks. Markets are prematurely speculating on that outcome, which would be a question of the second or third quarter next year. Treasuries have though clearly topped, and stocks do top with quite a few months‘ lags – we aren‘t there yet. Enjoy the commodities ride, and confidence gradually returning to precious metals.