In May, the coalition government fell apart

On 29 September, the Austrians will go once more to the ballot box (see box). The snap election was necessary as the coalition between ÖVP (conservative) and FPÖ (far-right) fell apart. It followed the resignation of Vice Chancellor Christian Strache (FPÖ) in reaction to the publication of a video secretly recorded in 2017 in Ibiza. Chancellor Sebastian Kurz (ÖVP) used the opportunity to tear up the coalition agreement and to call for a snap election. As Mr. Kurz lost a subsequent confidence vote in parliament, President Alexander Van der Bellen appointed a care-taker government consisting of technocrats headed by the unaffiliated President of the Constitutional Court Brigitte Bierlein.

The economic programme of the Kurz government

After the federal election in October 2017, a coalition between ÖVP and FPÖ was sworn in by December 2017. It focused on liberal economic policies, such as the reduction of the tax burden, and stricter immigration rules.

During the campaign Mr. Kurz had frequently argued that the position of Austria had been weakening. In the mid-2000s, Austria was known as the "better Germany". However, he felt that the country had been surpassed by others. Still, it is hard to find evidence for this analysis. Austria has remained one of the wealthiest countries of the EU (chart 1). 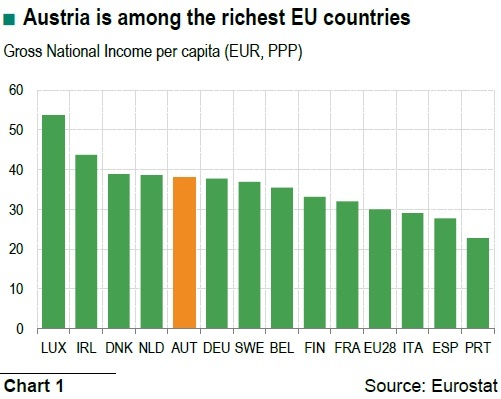 For the coalition, a reason for Austria's presumed underperformance was the relatively high tax burden (taxes and social contribution), which amounted to 42.4% in 2017.

The objective was to reduce it to 40%, a level close to Germany's.1 The tax burden is indeed among the highest in the EU (chart 2). However, the link between tax burden and economic welfare is not so obvious. Like Austria, Denmark and Sweden have relatively high tax rates, but are also among the most prosperous countries. Moreover, Austrian's high tax rate never seemed to be an obstacle to its past growth performance. 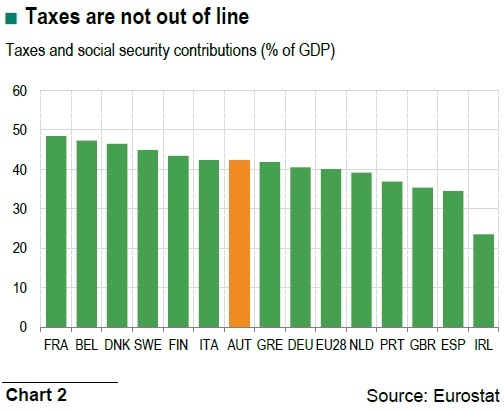 At the same time, as in Germany, the government aimed at achieving a balanced budget. In 2017, the preceding grand coalition between SPÖ and ÖVP left a budget deficit of 0.8% of GDP behind. Budget consolidation should be achieved through structural reforms, including a comprehensive tax reform and spending restraints. The coalition intended to cut spending by around EUR 12 billion, or 3% of GDP.

Immigration has been among the major concerns of the population. This is partly related to the high share of foreigners in the labour force. In 2018, 16% of employees were non-Austrian, one of the highest in the EU. Most of them are from other EU countries, in particular from central and eastern Europe. In addition, Austria has been confronted with a considerable inflow of asylum seekers. In the period 2015- 2016, 130 000 people applied for asylum. This flow has been substantially reduced to around 1 000 applications per month, as fewer refugees come to Europe by the Western Balkan route.

The coalition wanted to make Austria less attractive for immigrants. According to its view, immigration should only be facilitated for qualified workers in sectors where Austrian firms struggle to find suitable employees. Moreover, the right to social assistance would be blocked for newcomers that have lived less than five years in the past six years in Austria. Finally, cash benefits for asylum seekers would be reduced.

In the short period that the coalition was in charge only some modest measures were taken, such as a reduction of the unemployment insurance contributions for low-income earners, the revocation of the increase in the VAT rate on overnight stays and the introduction of the family bonus plan. The latter provides a tax credit of up to EUR 1,500 per child a year. It replaces the tax deductibility of childcare costs and the child allowance. The measure is contested by the SPÖ, as it favours wealthy households. Parents that earn little do not benefit fully, as their tax liability is reduced at most to zero.

On immigration, the government decided to peg social assistance to foreigners to their German language skills. Moreover, family benefits for children residing in another EU country have been made dependent on the cost of living in that country. The EU Commission esteems that the latter is not compatible with EU rules and has started an infringement procedure against Austria.

This result is mainly due to the decline in interest rates and the favourable economic environment, which has boosted tax receipts. As a result, the tax burden marginally increased in 2018 to 42.8% compared with 42.4% in 2017. A slight easing to 42.6% is expected for 2019.

Opinion polls point to a clear victory of the ÖVP. The party could obtain around 36% of the vote. To obtain a majority, it has to look for a partner. Mr Kurz had hoped to form a coalition with the small liberal party NEOS. However, this would not give him a majority as the party is only credited with 8.3% of the vote.

Mr Kurz could try to revive the so-called grand coalition with the SPÖ. Austria has been frequently governed by this combination, the latest time between January 2007 and December 2017. However, the ÖVP leader might not be very keen on contemplating this combination given unhappy memories of the previous grand coalition. It also would imply a drastic change in policy. Moreover, the SPÖ might not be so keen to join the coalition as, according to the polls, it is likely to lose a significant part of its support: around 22% against 26.9% in the 2017 election.

This leaves a coalition with a weakened FPÖ. Polls indicate that the extreme right party might obtain 20% of the vote compared to 26% in the 2017 general election. The advantage of a continuation of a coalition with a much smaller FPÖ is that Mr Kurz could continue the old coalition programme with more emphasis on his own policies and more ministers of his own party.

The main reason for the growth deceleration is the slowdown in global trade, largely related to Brexit uncertainty and the US-China trade conflict. It has resulted in weaker demand from the eurozone countries, in particular from Germany and Italy, which account for almost 40% of Austrian exports. Manufacturers do not expect a quick improvement in the outlook. Industrial confidence is at its lowest value since June 2016. In our scenario, we expect production to only gradually recover in 2020.

In addition investment is slowing after having substantially increased in the past three years. In 2018, the investment ratio amounted to 23.9% of GDP, the highest level since 2003 and after Belgium (24%) the highest in the euro area (chart 3). Demand was initially largely driven by replacement investment, but later followed by capacity increasing investment. Because of the weakening of cyclical conditions and growing uncertainty, business investment has been slowing. In the building sector, residential construction has remained quite buoyant thanks to strong employment growth and favourable financing conditions. However, housing permits have been losing momentum. In Q4 2018, only 15 600 permits were delivered, a lowest for the fourth quarter since 2010. Housing permits lead construction activity by about two years. 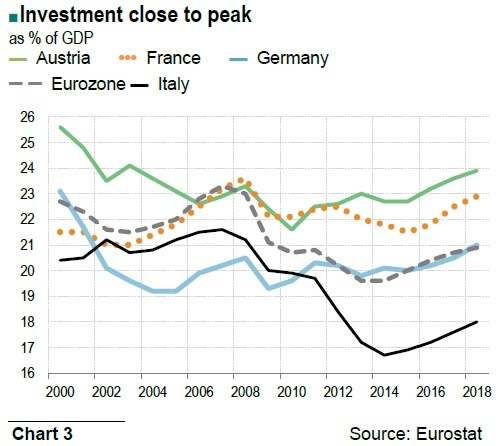 By contrast, private consumption has remained very dynamic underpinned by strong growth in household disposable income due to the 2016 tax reform, generous collective wage settlements in 2018 and vigorous employment growth. In 2018, real private consumption increased by 1.6%. Even though employment growth is set to slow in 2019, disposable income growth will remain robust supported by a substantial increase in collective wages (2.9% against 2.6% in 2018) and some tax measures such as the introduction of the family bonus. Consumption growth should remain at around the same level as last year and the savings rate might even inch up to 7.6% of disposable income from 7.5% in 2018. In the coming years, even though disposable income is set to slow, consumption could remain rather dynamic, as households may be dipping into their savings.

Against this backdrop, labour market conditions are expected to remain very tight. Moreover, tensions in the labour market may increase further due to the retirement of the baby-boom generation. Immigration is likely to remain an important factor to overcome labour shortages.

Wage settlements should remain generous, which will partly spill over in domestic prices, in particular for services. Inflation is expected to remain around 1.7% and core inflation could inch up to 2% in 2020 compared with 1.8% in 2018.

The uncertainties surrounding the forecast are very elevated and the risks are mostly on the downside. These are mainly related to the international situation. The end of the US-China trade conflict is still not in sight, and the situation seems to worsen. Moreover, as the 31 October deadline is approaching, uncertainty about Brexit is extremely high. The negative consequences of a no-deal exit are extremely difficult to predict. Nevertheless, the Austrian economy is in a relatively good shape. The labour market is quite solid. Moreover, public finances have improved considerably, providing the government with substantial leeway to fight recession if necessary.