Australia will report its October employment data on Thursday, and market participants are anticipating an upbeat outcome. The country is expected to have added 50K new jobs after losing 138K positions in September. The Unemployment Rate is expected to have ticked higher, from 4.6% to 4.7%, although the Participation Rate is seen improving from 64.5% to 64.8%.

Australia is moving towards a post-covid “normality.” Restrictions for fully vaccinated people are being lifted in different regions of the country, as over 68% of the population is fully vaccinated. The national plan for easing coronavirus restrictions is tied to a national 80% target of Australians aged 16 and above, an objective that has been achieved in several regions. Hence, reopenings are expected to have a positive impact on hiring and the participation rate.

However, restrictions remained in Victoria through most of October, the second-largest population state, while Western Australia announced its internal border won’t be fully open until next year, which means previsions on job creation may be too optimistic. 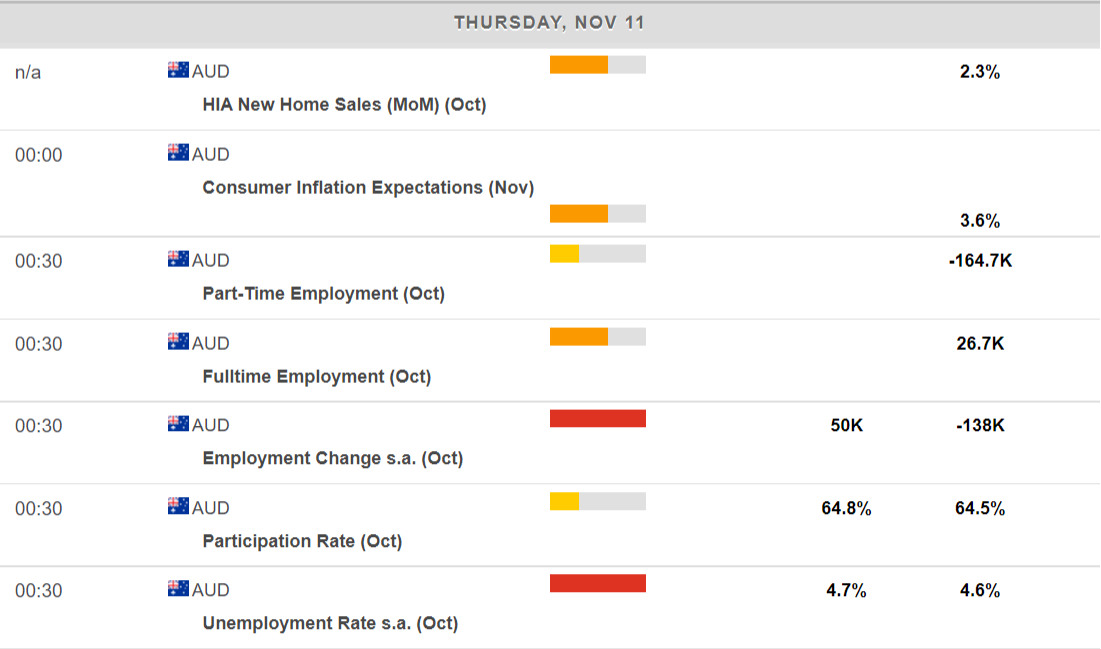 Wage growth, inflation and the RBA

Meanwhile, Australian wage growth stood at 0.4% in the three months to June, down from 0.6% in the previous quarter. Public sector wages were growing at their slowest pace in 24 years, while growth in the private sector was 0.5%.

The Reserve Bank of Australia has conditioned a rate hike to wages growing at 3%, something policymakers expect to happen late in 2023. Policymakers are upbeat about the pace of the economic comeback but utterly conservative when it comes to tightening the monetary policy.

Australian inflation unexpectedly jumped to 3% YoY in the third quarter of the year, while RBA’s Trimmed Mean CPI printed 2.1%, hitting RBA’s target of 2% to 3% for the first time in six years. The figures spurred speculation the central bank may need to act beforehand, but Governor Philip Lowe quickly denied such a scenario, saying markets overreacted to the headline.

Moreover, he noted that there is still considerable uncertainty on wages growth, and it would be “extremely unlikely” for inflation to jump well beyond the RBA projection and warrant earlier rate hikes. He also noted that if unemployment falls into the low 4s% or below, then they could see higher wages. But the fact is that wages growth has been declining for over a decade, and the pandemic only worsened the picture.

The AUD/USD pair is on the losing side ahead of Australian employment figures, extending its slide from the 0.7555 multi-month high posted in October. The ongoing decline is linked to the market’s risk-off mood amid inflation-related concerns weighing on equities. A disappointing report could exacerbate the slide while the report needs to be much better than anticipated to force the pair into a U-turn.

From a technical point of view, AUD/USD is currently piercing the 50% retracement of its latest daily advance at 0.7360, a near-term resistance level, followed by a more relevant one in the 0.7420 price zone. Beyond the latter, the pair has room to extend gains towards the 0.7500 figure.