The Australian dollar has recorded losses in the Tuesday session. Currently, AUD/USD is trading at 0.7359, down 0.26% on the day.

Australia releases its consumer inflation figures each quarter, so there is plenty of anticipation before each release. The consensus for second-quarter CPI is 0.7% for Headline CPI, a slight improvement over the Q1 reading of 0.6%. Trimmed Mean CPI will be closely watched, as the RBA sets its policy based on this index. The estimate stands at 0.5%, compared to 0.3% beforehand.

Unlike the Federal Reserve, the RBA doesn’t have inflation as one of its most pressing concerns. Inflation remains within the Bank’s range of 2-3%, and with lockdowns in place due to a rise in Covid cases, inflationary pressures don’t appear to be on the increase. Unless the forecasts are well off target, I expect a muted reaction from the Australian dollar.

At the RBA’s July meeting, RBA Governor Philip Lowe announced that the central bank would taper the asset purchase program from AUD 5 billion to 4 billion each week, starting in September, with a review in November. This is not a massive reduction by any means, but it is nonetheless an important signal to the markets that the RBA is tightening policy, and this should continue as long as the economy continues to perform well.

The markets are awaiting the FOMC policy meeting on Wednesday. The US dollar has been under some pressure, but concerns that the Fed could show a hawkish side and announce a taper will likely keep the sellers at bay until after the meeting. If the Fed sounds dovish, the dollar could face some headwinds in the latter part of the week. 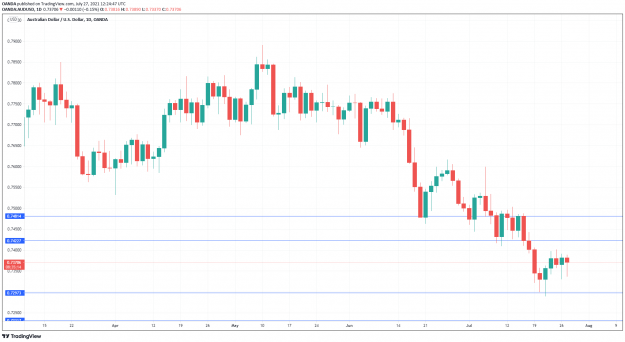