The AUD/USD pair trades around the 0.7400 level, marginally lower on a weekly basis. The aussie suffered the most on Tuesday after the Reserve Bank of Australia announced its decision on monetary policy.

The central bank decided to maintain its tapering plans, reducing its bond-buying purchases from A$5 billion to A$4 billion per week, although it extended them to February 2022. Policymakers clarified that their decision was directly linked to the “delay in the economic recovery and the increased uncertainty associated with the Delta outbreak.” The statement also indicated that policymakers believe the ongoing setback to the economic expansion would likely be temporary. The benchmark rate was left unchanged at 0.10%, as well as the 3-year bond yield target at the same level.

On the other hand, the greenback benefited from a poor market’s mood, as the coronavirus Delta variant keeps storming the Northern Hemisphere, arising doubts about global economic progress. The wait-and-see stance adopted by most central banks also weighed on investors, although demand for safety was below average.

Inflation and employment in the eye of the storm

Data-wise, Australian figures reflect the ongoing restriction. August TD Securities Inflation stood pat in August on a monthly view and increased by 2.5% from a year earlier.  Also, the AIG Performance of Services Index contracted to 45.6 in August from 51.7 previously.

The US published Initial Jobless Claims for the week ended September 3, which declined to 310K, the lowest level in almost 18 months, beating expectations. In addition, Producer Prices in the country were up in August, reaching 8.3% YoY. The figures revived speculation of mounting inflationary pressures in the US.

During the upcoming days, the US will publish the final reading of August inflation data and August Retail Sales, foreseen down 0.7% in the month. Finally, on Friday, the focus will be on the preliminary estimate of the September Michigan Consumer Sentiment Index, foreseen at 70.2.

Australia will publish NAB’s Business Confidence on Tuesday, while RBA Governor Philip Lowe is scheduled to speak the same day. Later in the week, the country will publish September Westpac Consumer Confidence, while on Thursday, the focus will be on August employment data and September Consumer Inflation Expectations.

The weekly chart for the AUD/USD pair indicates that bears did not give up just yet. The pair keeps developing above its 100 and 200 SMAs but below a mildly bearish 20 SMA. Meanwhile, technical indicators have resumed their declines within negative levels, limiting the chances of a bullish breakout.

The daily chart reflects easing buying interest but is still far from suggesting an upcoming decline. The pair held above a directionless 20 SMA, although the 100 SMA heads firmly lower above the current level. At the same time, the Momentum indicator is retreating from near overbought readings, while the RSI consolidates around 54.

The pair needs to recover the 0.7400 threshold and then break above 0.7480 to gather sufficient bullish strength to maintain the upward course in the days to come and approach the 0.7600 figure. The immediate support level is 0.7330, with a break below it exposing the 0.7240 price zone. 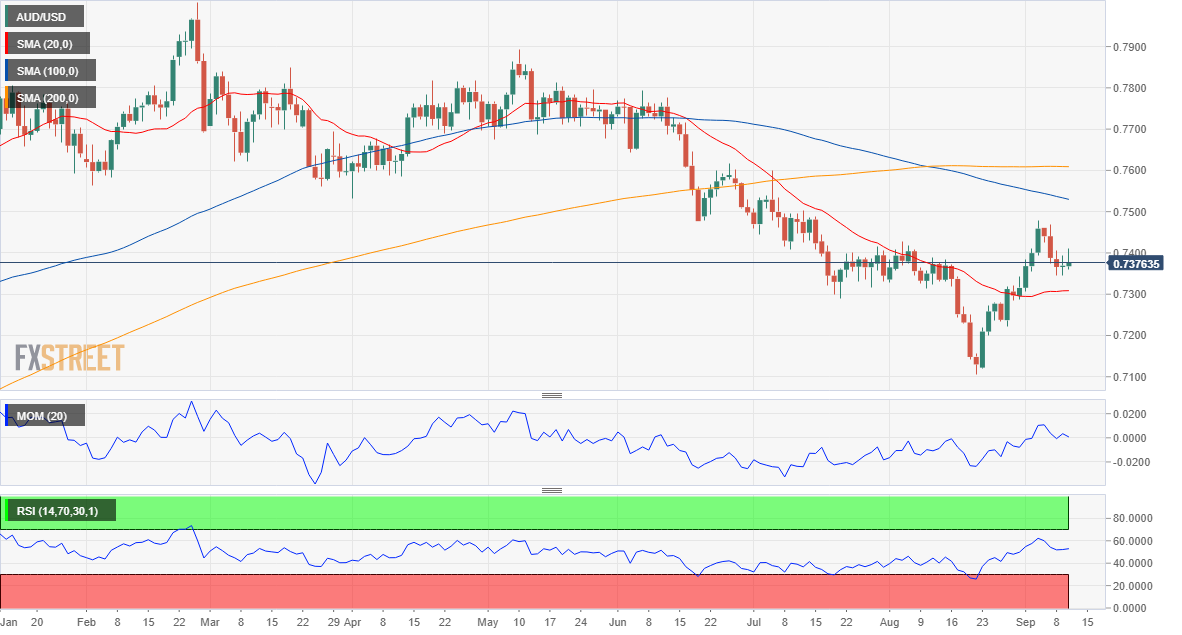 The FXStreet Forecast Poll shows that the AUD/USD pair could turn back north. The pair is seen bullish in the three time-frame under study, and on average developing above the 0.7400 threshold. Bulls account for 50% or more of the polled experts in all cases, which supports a bullish breakout in the weeks to come.

The Overview chart shows that the three moving averages have turned south although most targets accumulate around the current level. Mainly banks are expecting higher highs in the monthly and quarterly views, with an approach to the 0.8000 level on the table.