As my colleague Fawad Razaqzada noted earlier today, the US dollar has caught a bid today after traders reevaluated yesterday’s FOMC meeting and deemed it moderately hawkish. Though the central bank removed the phrasing about monetary policy remaining accommodative from its statement, Fed Chair Powell was at pains to emphasize that that change was more procedural than anything. At the end of the day, the Federal Reserve is the only major central bank engaging in sustained interest rate increases, and until that dynamic starts to change, the greenback could maintain its recent strength.

Heading into this week, the textbook bearish channel in AUD/USD was under threat, boosted by hopes of a thaw in US-China trade relations. However, President Trump’s aggressive rhetoric toward China at the UN Security Council earlier this week has dashed those hopes, making it more likely that the budding trade war gets worse before it gets better.

The Aussie formed a textbook “bearish pin,” or inverted hammer, candle in the wake of yesterday’s FOMC statement and press conference. This pattern shows an intraday shift from buying to selling pressure in the market and is often seen at near-term tops. At the same time, the RSI indicator appears to be rolling over from the top of its bearish range between 30 and 55, signaling that the longer-term bearish trend remains intact.

With this price action pattern forming at a logical resistance level from the established bearish channel, bears may look to drive the pair back toward the lows from earlier this month around 0.7100 next. A break below that low, toward the bottom of the channel around the psychologically-significant 0.7000 handle, could come into play if we see an escalation of trade war fears. Only a break above this week’s high around 0.7300 would erase the near-term bearish bias. 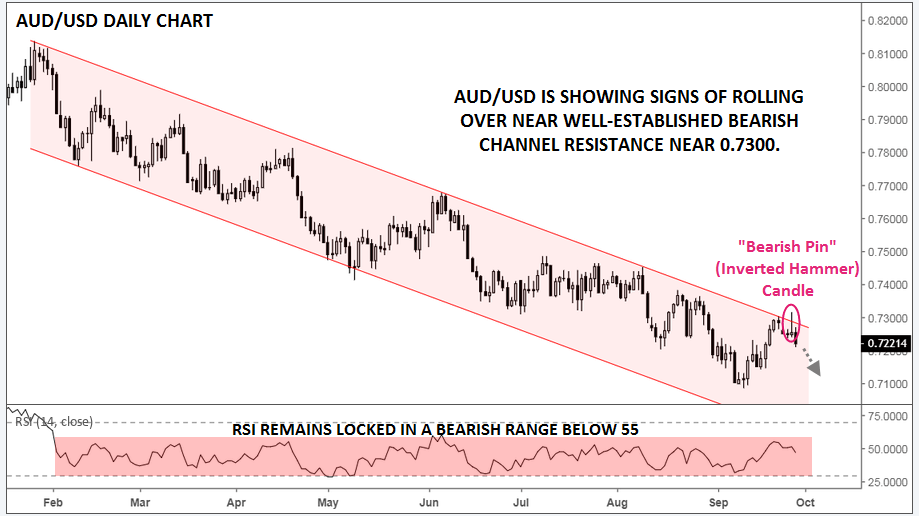