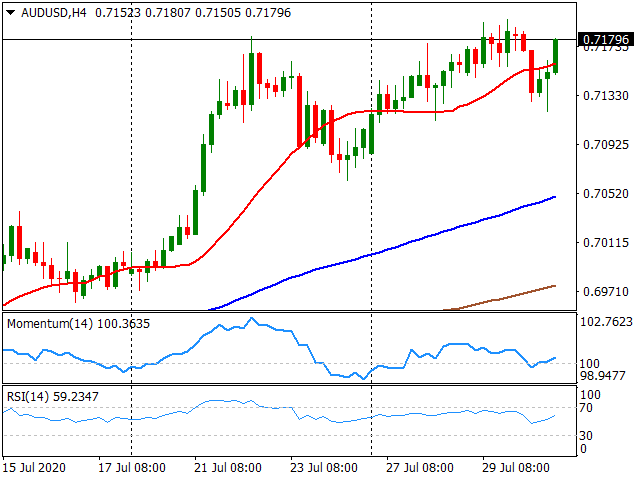 The Australian dollar pulled away from a 15-month peak right below the 0.7200 level and posted mild losses against the greenback on Thursday as Fed dovish tone and devastating US GDP figures triggered risk aversion and pushed the AUD/USD to lows at the 0.7120 area. However, a recovery in Wall Street indexes helped the Aussie to recover some of the lost ground during the American afternoon. Technical factors also contributed to the pair’s pullback. The AUD/USD failed to break decisively above the 0.7200 psychological level and turned lower instead.

Data from Australia showed that the ANZ's Business Confidence and the Activity Outlook indexes continued to worsen in July. Additionally, Building Permits declined by 4.9% on a monthly basis in June. During the upcoming Asian session, private sector credit for June and Q2 PPI figures will be released.

Technical indicators in the 4-hour chart maintain a slightly bullish tone, while the price has managed to recover above the 20-period SMA. In the daily chart, the positive stance is somewhat stronger, although the RSI remains in overbought territory suggesting some consolidation ahead. A clear break above 0.7200 is needed to pave the upward way.

AUD/USD flirts with highs near 0.7370 on RBA's status-quo

EUR/USD trades at 1.1959 versus 1.1923 in early Asia. The bid tone around the single currency strengthened on Tuesday, pushing EUR/USD higher, as stock markets gained, weakening safe-havens such as the greenback.