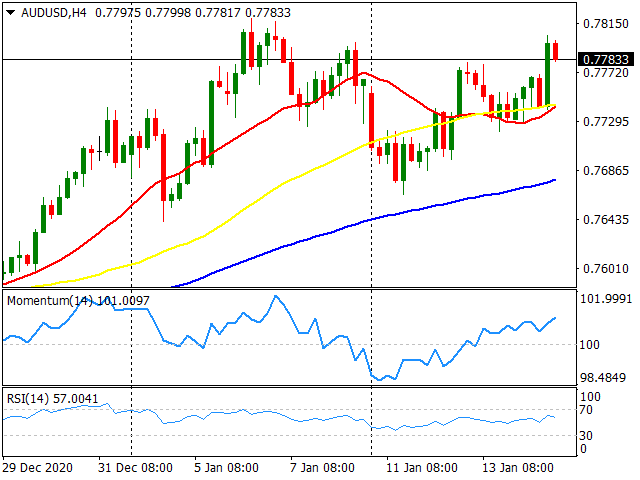 The AUD/USD rose to a fresh 1-week high of 0.7805 during Thursday’s New York session, rebounding from a daily low of 0.7728. The greenback failed to retain its early strength and retreated across the board during the American session weighed by disappointing US jobless claims data and following Fed’s Powell speech. At the same time, the Australian dollar benefitted from the somewhat optimistic mood in markets. On Friday, Australian data includes Home Loans numbers, while in the US a series of economic reports will be published. Still, the main event will be the US President-elect Biden speech at 00:15 GMT.

From a technical standpoint, AUD/USD perspective remains bullish according to the 4-hour chart, with indicators pointing north above their midlines. Still, the RSI holds around 58, leaving room for further advances in the upcoming sessions. Meanwhile, the 20 and 50 SMAs are poised to concrete a bullish cross at the 0.7750 zone, which lines up as immediate support for the pair. On the upside, a decisive break above the 0.7800 area would pave the way for a retest of its multi-year high at 0.7820, which if broken, would put the 0.7850-60 area in focus.