The Dutch company ASML, considered the world’s largest supplier of photolithography systems for the semiconductor industries, will present earnings results for the first quarter of the year tomorrow, April 21. It’s worth remembering that the last time they released their earnings results was on January 19, where the company reported EPS of $3.23, had a net margin of 24.30% and a return on equity of 25.91%, and revenues of $3.96 billion, while in the prior-year quarter, the company posted $2.70 EPS, so some analysts expect it to post $9.34 earnings per share for the current fiscal year.

ASML is a member of the IT & Technology sector, which includes 623 individual stocks, and currently, the Dutch company has a sector rank of Zacks #10, while the Zacks consensus estimate for ASML’s annual earnings for the last 90 days has moved 11.36%, which has generated confidence in analysts, indicating an improvement and a more positive outlook for the action. According to the latest data, ASML has gained around 28.99% so far this year.

ASML will announce its financial results for the first quarter of 2021 on Wednesday, April 21, before the market opening, and the CEO of the company has stated that they expect revenues in the first quarter to be between 2.4 billion 4.8 billion, with a margin gross between 45% and 46%, and EPS ranging from $3.08 to $3.13. He also mentioned that the net reserves for the first quarter were solid and amounted to 3,100 million euros; with a solid order reception, the company has the intention to declare a total dividend for 2019 of 2.49 euros per common share, consisting of an interim dividend of 1.05 euros per common share paid in November 2019 and a final dividend payment of 1.35 euros per common share. However, given the current risks and uncertainties related to the ongoing health crisis, the company has decided to refrain from providing guidance for the second quarter. 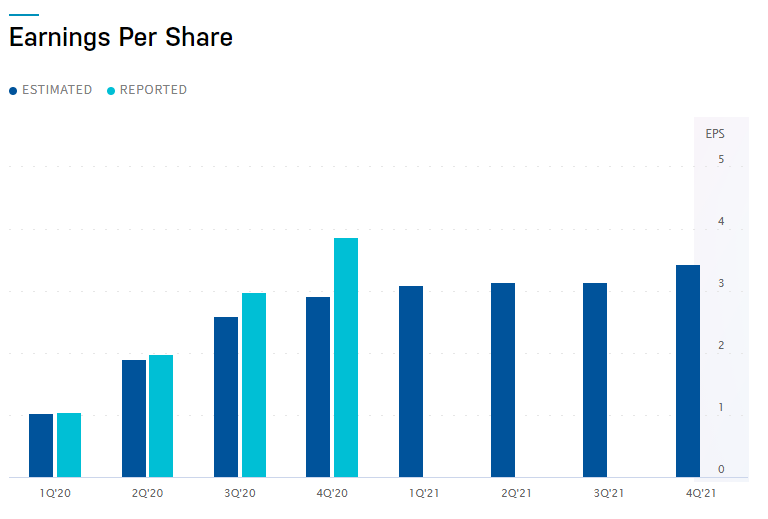 Similarly, one of the main global providers of technology, communications, information and entertainment products and services, Verizon Communications, a company that offers data, video and voice services and solutions on its networks and platforms, will report earnings for the first quarter of 2021 on the same day as ASML, Wednesday, April 21. The last time the company published its earnings results was on January 25, where it reported earnings per share of $1.21 and revenues of $34.70 billion, with a net margin of 14.76% and a return on equity of 32.15%, showing that Verizon’s revenues were down 0.2% year-over-year and that, during the same period last year, the company posted $1.13 EPS.

Since it last declared its results, Verizon continued with the aggressive deployment of the 5G ultra-broadband service to expand its coverage, collaborated with Unity to create and operate 3D content in real-time, signed with a partnership with global insurance broker Hub International Limited to provide managed network services to more than 450 offices in the United States and Canada, and further expanded Fios Forward to support digital inclusion and provide opportunities for underserved homes to thrive in In the digital world. These are just some of the Verizon initiatives during the quarter that will likely result in gross revenue growth.

Also on the same Wednesday, April 21, NextEra Energy Partners LP will publish its quarter results. NextEra is dedicated to the acquisition, management, and ownership of clean energy projects contracted with long-term cash flows has interests in wind projects and solar in North America, as well as natural gas infrastructure assets in Texas. The last time it published its quarterly earnings results was Monday, January 25, where it reported earnings of $0.85 per share, had revenue of $21.00 million and its quarterly revenue increased 2.9% compared to the same quarter last year, while during that same quarter the company recorded $0.50 EPS.

Analysts expect the company’s efforts to execute long-term strategic goals and focus on the United States to have boosted its performance during the first quarter, as NextEra converted $ 300 million of convertible debt into equity last year, likely reducing the interest payment burden during the first quarter next to declare; in turn, the completion of three organic growth projects in 2020 could benefit their bottom line, as the high-quality clean energy portfolio may be important factors for a positive outlook for the company. The Zacks Consensus Estimate for Q1 is set at $0.33 EPS, and $295.1 million revenue, which indicates an increase of 39.2% and 109.7% respectively, compared to the figures reported last year.

XAU/USD 4-hour support is a hurdle for the bears

The price of gold is trading at $1,836.81 at the time of writing and is up on the day by some 0.30%. The bulls, however, are backing off on what could be profit-taking as the US dollar stabilises within a narrow range on Monday vs a basket of major currencies.  DXY is flat and has stuck to a 90.0420/3390 window.