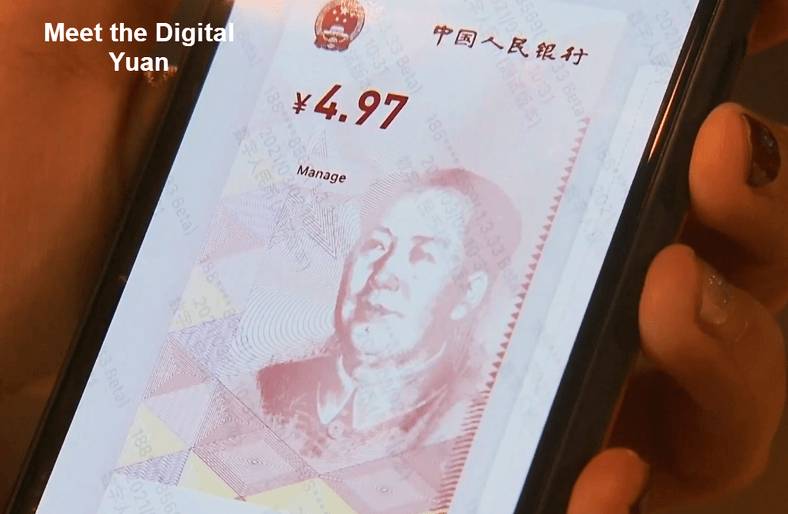 Cyber Yuan vs Bitcoin and Altcoins

The cyber yuan is a government-sponsored digital currency designed to track the movement of every penny. Bitcoin promotes anonymity.

Apps like Apple Pay, Venmo, Paypal, and Google Pay just facilitate payments by skipping a credit or debit card middleman. They are not their own money.

In contrast, China turned the yuan into a string of digits. It resides in cyberspace. On a screen it displays with a silhouette of Mao Zedong and looks just like the paper money.

Please consider China Creates its Own Digital Currency, a First for Major Economy

A thousand years ago, when money meant coins, China invented paper currency. Now the Chinese government is minting cash digitally, in a re-imagination of money that could shake a pillar of American power.

China’s version of a digital currency is controlled by its central bank, which will issue the new electronic money.

Beijing is also positioning the digital yuan for international use and designing it to be untethered to the global financial system, where the U.S. dollar has been king since World War II. China is embracing digitization in many forms, including money, in a bid to gain more centralized control while getting a head start on technologies of the future that it regards as up for grabs.

That an authoritarian state and U.S. rival has taken the lead to introduce a national digital currency is propelling what was once a wonky topic for cryptocurrency theorists into a point of anxiety in Washington.

Digitization wouldn’t by itself make the yuan a rival for the dollar in bank-to-bank wire transfers, analysts and economists say. But in its new incarnation, the yuan, also known as the renminbi, could gain traction on the margins of the international financial system.

To facilitate acceptance, China conducted free money lotteries. 750,000 people got some free money in these lotteries. It is working on a method to allow the app to work without an internet connection.

Coming soon, China will require everyone to use the digital currency. Paper money will be invalid.

I do cheer one thing, and that's the de-dollarization of the global economy.

Under guise of national security, Trump made a global mess of things for reasons that had nothing to do with security. Unilateral sanctions on Iran and Gazprom are key examples.

In general competition is good. Soon, countries will be able to tell the US to go to hell unless there is full international cooperation.

The dollar, isn't going away and it will not be replaced by the yuan any time soon, if ever. But the end of the ability of the US to unilaterally call all the shots is on the near horizon.

That's a welcome development. So is anything that forces the US to mind its own business.

GBP/USD is cheering a broadly weaker US Dollar amid firmer sentiment while holding higher ground near 1.2000 in early European trading hours. China's reopening optimism spurs risk flows and boosts the risk-sensitive GBP ahead of Bailey's testimony and Fedspeak.

The prediction of recession is gaining momentum

Today brings the Dallas Fed survey and a slew of speeches by Fed officials, but the big story will be the November nonfarm payrolls on Friday, currently forecast at a lesser 200,000 from 261,000 in October (but the unemployment rate the same 3.7%).