The lowest manufacturing reading in decades for the Chinese economy and a Chicago PMI reading of 43.2 (well into contraction territory) was met with selling in the S&P and buying in Treasuries. Adding fuel to the fire was news of a vote to impeach the President.

Given the day's news, we are surprised to see the S&P holding up so well. However, traders are likely refraining from making any large speculative bets until we see what tomorrow's non-farm payroll report will have to say.

With that said, we aren't sure what the bulls would need to see to keep sentiment positive. If the employment report is good it might take further Fed cuts off the table, but if it is poor the market's lofty valuations might need to come back to earth. So, what would make the market go higher? Perhaps only a number right in-line with expectations (105,000) would keep the market afloat. 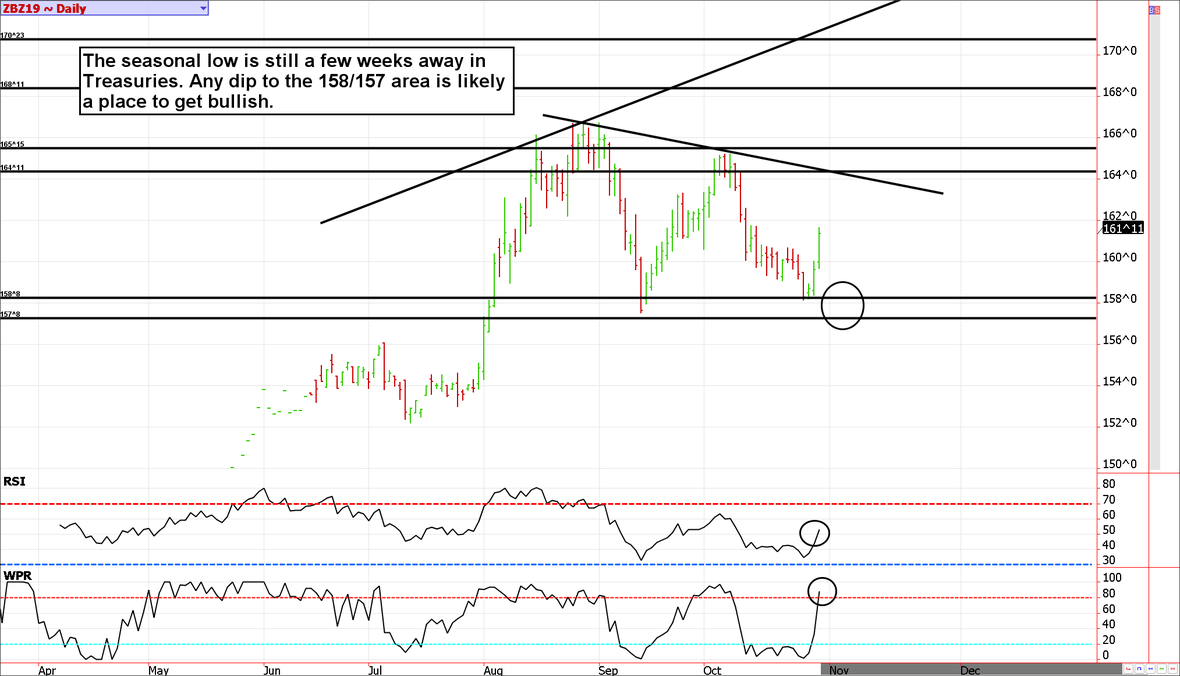 Getting bullish in Treasuries on dips is likely the best approach.

We were hoping for Treasuries to soften a little further to provide solid bullish opportunities from support levels. However, the Fed meeting and weak manufacturing altered the trajectory of the markets. Nevertheless, things change quickly; prices could easily retest recent lows and even push a little lower in the coming weeks as we await the seasonal rally (due to start around November 13th).

From the previous newsletter but still valid:

We aren't fundamentally bullish bonds, but we do think the ZB rallies off 157'0 support.

One thing we have learned throughout the years is that holiday markets should not be underestimated. Volume lightens up and markets do things they wouldn't normally do (although that is hard to prove).

Additionally, during this time of year fundamentals mean very little. Seasonals, light volume, and irrational trading are the driving forces. With that said, the Treasury market is setting up for a seasonal buy from November 13th through 28th and the chart suggests sharp support near 157'0 will hold (at least the first time down).

We will be looking for further weakness in the coming sessions as a place to consider turning bullish in Treasuries.

The best trades are likely for those looking to get bullish in the 10-year note and 30-year bond. 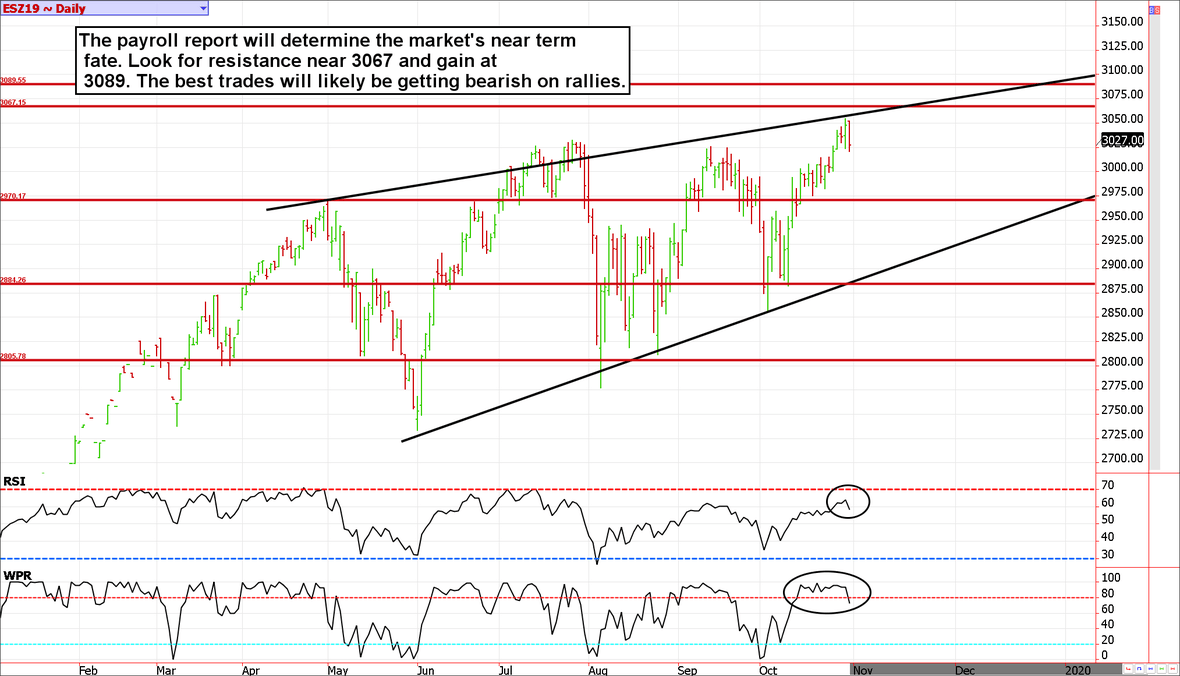 The upside in stocks is probably limited, but the downside risk is substantial.

We have been generally bullish in recent months but the closer we get to 2020 the more we become concerned about the political landscape. Regardless of which candidate wins the election next November, the markets will go through a long period of uncertainty. Further, weekly and monthly charts of the S&P and NASDAQ suggests sharp resistance and soon-to-be-overheated oscillators. In other words, the market might continue to drift up toward our technical levels of 3060 and 3090 but the risk of being long and wrong is big.

If prices turn the corner, the S&P could drop several hundred points without negating the uptrend. In our opinion, traders should be protecting bullish profits and nibbling on bearish trades.

We've been looking for 3060-3090 for quite some time, it seems to finally be in the cards but it feels like the bears might show up again.


In other commodity futures and options markets...

September 16 - Exit the diagonal spread in hogs to lock in roughly $450 before transaction fees.

September 24 - Exit credit spread in December cattle to lock in about $350 per lot before transaction costs.

October 10 - Buy back silver 16 put to lock in gain on that leg of the trade near $330 per lot before transaction costs.

October 16 - Offset British Pound future to lock in the gain near $1.2820ish. Most were essentially long from the $1.2200 level (after considering the rollover).

October 24 - Sell diagonal call spreads in live cattle (sell the February 128 call and buy the December 125 call for a net credit of about $470 before transaction costs.

October 28 - Sell S&P 500 futures in a SMALL way using Micro E-mini or E-minis depending on account size and risk tolerance.