Tesla (TSLA) succumbed to relentless selling pressure across the board on Wednesday as equity markets continue their nervous start to the year. Surging yields and oil prices have not helped, and the added surge in UK inflation will have stoked further investor concerns. Tesla is a high beta stock, so the added volatility that brings meant that it was always going to be in for a tough session on Wednesday. However, things started out somewhat benignly, and it was only toward the end of the day that markets turned aggressively negative. This helped push Tesla below $1,000 and on to close at $995.65 for a loss of 3.4%.

Tesla is facing a few headwinds as investors look with laser focus at their high growth names and ditch many of them. Cathie Wood of ARK Invest has been selling Tesla for some time now. In fact, Tesla is no longer the top name in the ARK Next Generation Internet ETF (ARKW). Coinbase (COIN) has taken over as the top holding, while Tesla slips to number two.

Elon Musk also sold a hefty chunk of stock, and now Bank of America has stuck the knife in with its latest note. “We think 2022 marks the start of commercialization for electric vehicles, with many start-up EV automakers launching/ramping new product and many incumbent automakers also beginning their product launch onslaught,” BAC said. Bank of America noted that it sees Tesla having less market share than traditional automakers as soon as 2024, with Tesla's EV market share in the US falling from 69% to 19%. This would be a rather alarming prospect for investors.

However, there is always a buyer to match every seller, and lo and behold, here comes Piper Sandler riding over the hill with a bullish forecast of 1.5 million deliveries this year. Piper Sandler sees the new factories in Texas and Berlin keeping up with strong global demand and sees margins also growing. Piper hands a $1,300 price target to Tesla.

We have identified $980 as the key level and pivot. Above is bullish, and below is bearish. It's as simple as that.

Already the stock looks more bearish in the short term with a lower high and lower low. Breaking $980 confirms the lower high and opens the door for a move to $886 and $843. Declining Relative Strength Index (RSI) and Moving Average Convergence Divergence (MACD) indicators are also factors adding to the bearish tilt. 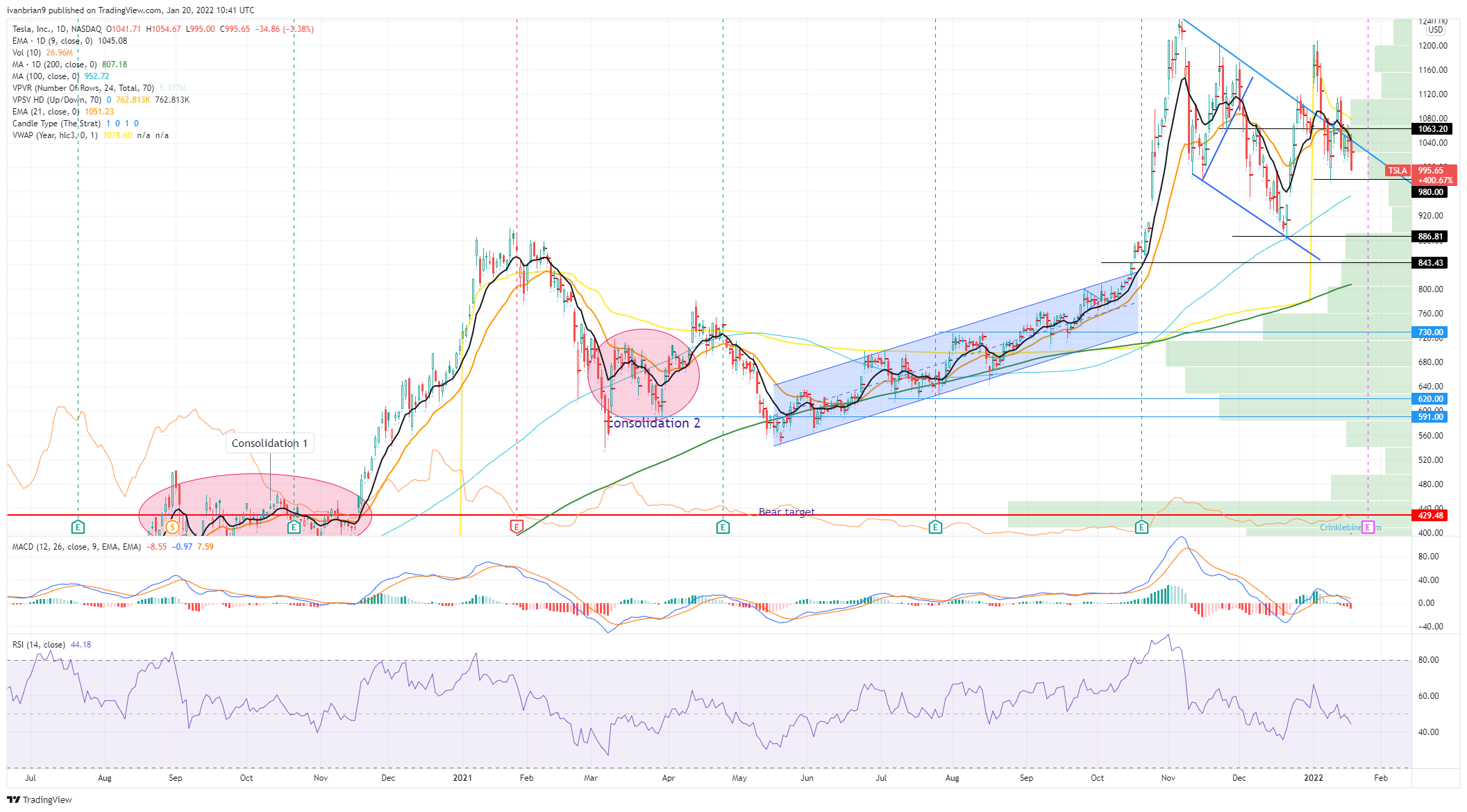 AUD/USD bulls flirt with 0.7100 with eyes on Aussie Retail Sales, US PCE Inflation

AUD/USD holds onto the recently sidelined moves around 0.7100 as bulls and bears jostle over mixed clues heading into the key data on Friday. Also restricting the Aussie prices are downbeat statistics at home and looming economic fears over the largest customer China.

EUR/USD: Bulls are taking control and eye the 1.08 area

EUR/USD's market structure is now bullishon the daily chart. Euro's support near 1.0705 could offer a base from which bulls can engage in order to target the 1.08 areas. For the FOMC minutes, the pair was based at the targetted support area and there were prospects of a higher correction from support.

Gold price (XAU/USD) witnessed a minor pullback towards $1,850.00 in its initial trading hours but has bounced back sharply. The precious metal is displaying a balance auction in a range of $1,840.76-1,856.35 from Wednesday.

Cardano price is preparing for a retest of $0.80. Still, jumping in early might be too risky. Traders should wait for confirmation signals.