Update March 4: Shares in PLTR are stronger on Thursday as Cathie Wood of ARK Invest buys more shares on Wednesday. It is unclear if this is lock-up stock from founders and senior executives but ARK Invest has been purchasing large blocks of Palantir shares recently. PLTR shares are trading $25.29 up 7%.

NYSE:PLTR has had its roughest week since becoming a public company at the end of September 2020, and the slide could extend as the markets enter March on a choppy note. On Friday Palantir traded mostly flat, trimming 0.25% to close the trading session at $23.90 as shares lost nearly 18% since the start of the week. Palantir has been mired in a month-long dip and as the global market continues to be unsettled, there could be more pain ahead for shareholders in the coming weeks.

More insiders of Palantir’s executive team are selling off their shares since the IPO lockup period has expired. The total sum comes to a staggering $112 million as the insider sell off continued on Friday, another catalyst in the stock price being driven down over the past week. Insider selling is not uncommon, especially in Silicon Valley, where big tech companies often pay high-ranking employees with stock-based compensation. Still, investors always seem to react to the news of insiders selling shares as executives having a bearish outlook on their own company. 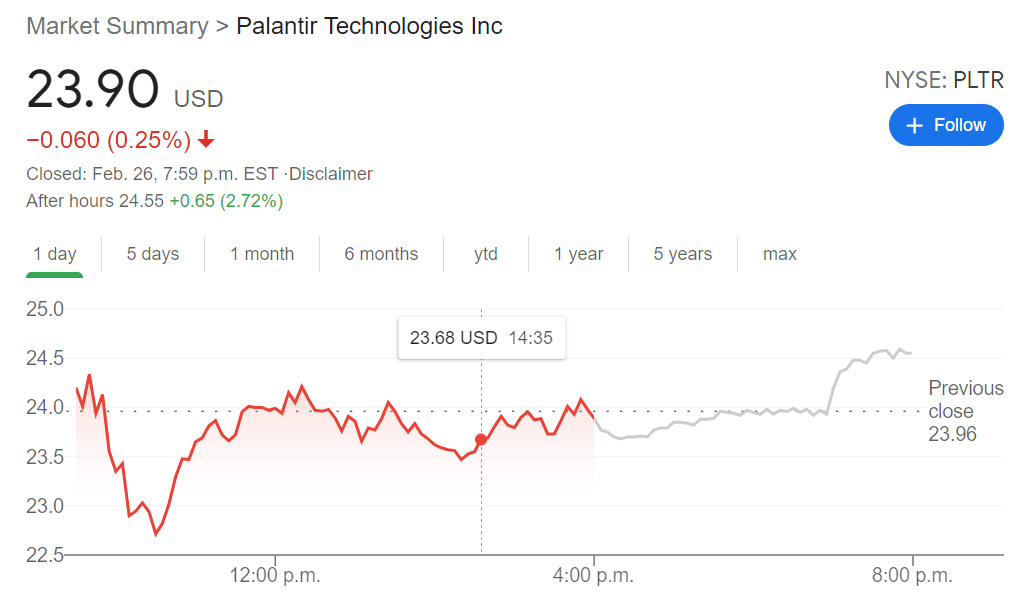 Palantir shareholders received another reminder of how the company is publicly viewed with the lawsuit from UK political site Open Democracy over the undisclosed contract with N.H.S. While controversy is nothing new to Palantir, shareholders or potential investors should know that there is always a chance that other companies or agencies will refuse to work with the data analytics company in the future. Palantir has  a very public reputation of being a hired gun of the U.S. government, and has been involved in several projects that seemingly undermine the privacy of citizens.

Update March 3: The S&P 500 Index has opened Wednesday's trading session with a slide, yet Palantir Technologies (NYSE: PLTR) shares are on the rise. However, these gains are meager. While broader equity markets are influenced by rising bond yields, there is no new explanation for movements in the Denver-based firm. One of the previous factors shaping trading was the scooping up of shares by Cathie Wood's ARK Investment. That bullish driver seems to be dimishing. Cathie Wood of Ark Invest who recently made some large purchases of PLTR is to speak to Benzinga in a Q&A forum later today at 1400 EST.

Update March 2: Palantir Technologies Inc (NYSE: PLTR) has been changing hands at $25.05 in Tuesday's premarket trading, up nearly 1% – on top of gains of 3.81% recorded on Monday. The primary driver for early March's increase can be linked to one person – Cathie Wood. The star manager of Ark Investment added over three million PLTR shares to her fund's portfolio, influencing other traders to jump on the Denver-based data analytics company. Wood has been in the public eye after successful ventures into Bitcoin and Tesla.

Update March 1: March begins with an upward march for Palantir Technologies Inc (NYSE: PLTR) which is up above $25, an increase of some 5%. Cathie Woods, who manages Ark Investments, has reportedly added to her fund's position on the firm. The endorsement by Woods, who is gaining traction on financial media and among RobinHood traders, is helping Alex Karp's company higher. It is essential to note that there is a long way to reach the February peak of $38.17.

Four reasons why XRP price will crash to $0.65

XRP price set up a swing high on August 15 and breached this local top to create a new one on September 6. However, the second attempt failed as the market experienced massive selling pressure the next day.