The Gold Price remains downward pressured in the mid-New York session, threatening to break a two-month-old upslope support trendline, which passes on top of the 50-day moving average (DMA) near the $1930-40 area. Factors like continuing hawkishness expressions by Fed officials and higher US Treasury yields weighed on the precious metal price, as XAUUSD is falling some 0.90%, trading at $1933.90 a troy ounce at the time of writing.

During the week, some Fed policymakers expressed the need for 50-bps rate hikes to the Federal Funds Rates (FFR); even a 75-bps rate hike was considered by the hawkish St. Louis Fed President Bullard. Nevertheless, the words of Fed Chair Powell, saying that a 50-bps rate hike in the May meeting “is on the table,” spooked investors, as bond yields rise, while US equities are tumbling on their worst daily loss in the week.

Elsewhere, Nomura was in the headlines with a prediction that after a 50 bps rate hike in May, the Fed would follow up with two 75 bps rate hikes in June and July. That backdrop isn’t good for Gold Prices, despite its hedging appeal in inflationary/stagflationary times. Rising interest rates mean the “opportunity cost” of holding non-yielding assets like Gold has gone up, which tends to dent demand.

The Fed now goes into blackout ahead of the 3-4 May meeting, meaning precious metals might get some respite in the days ahead from hawkish Fed-related bearish flows.

Gold is probing the confluence of a 50-DMA and a three-month-old upslope trendline. Also, it is worth noting that the Relative Strength Index (RSI) just broke below the 50-midline, a bearish signal that can exert downward pressure on XAUUSD, so a move towards March’s 29 cycle lows at $1889.91 is on the cards. 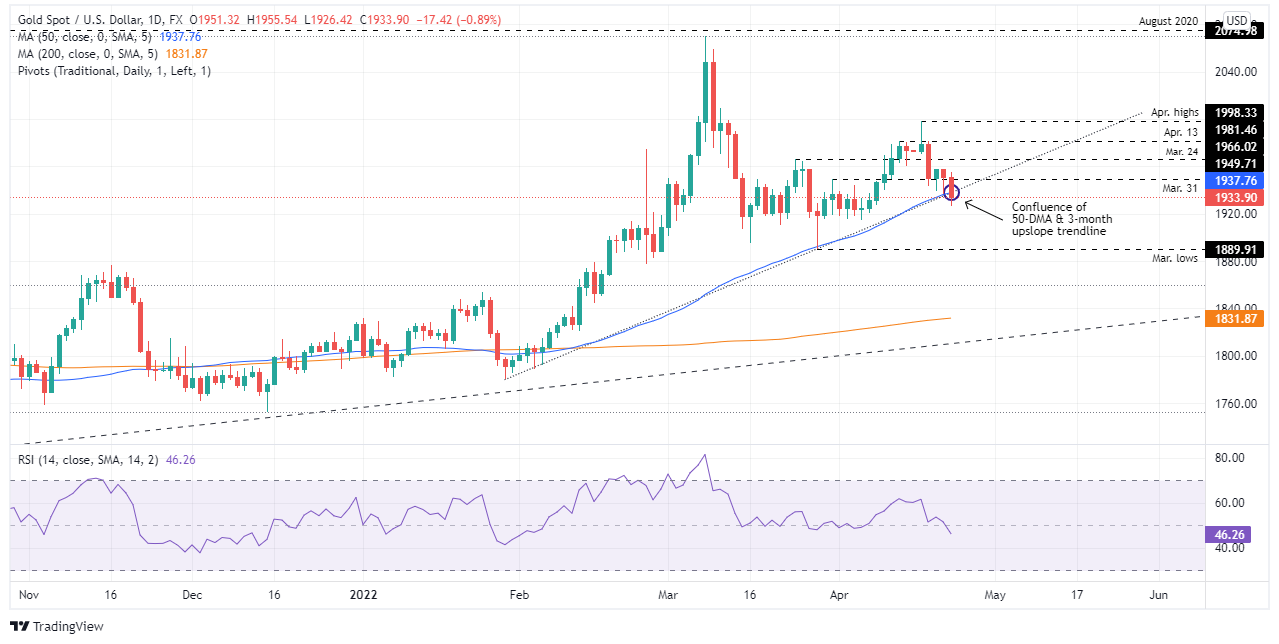 AUD/USD is off the lows but remains pressured below 0.6900 on a big beat on the Chinese Caixin Manufacturing PMI. The US dollar attempts a recovery amid risk-off trading, ahead of US ISM. Strong Aussie PMI, increasing odds of another 50 bps RBA rate hike fails to recall bulls.

The USD/JPY pair is aiming towards 136.00 as the Statistics Bureau of Japan has reported higher-than-expected Unemployment data. The jobless rate has improved to 2.6%, higher than the estimates and the prior print of 2.5%.

Gold struggles to defend $1,800 as DXY rebounds ahead of US ISM PMI

Will the ApeCoin price fall to $2 this summer

ApeCoin price shows incoming sell-off signals on the final day of June. It is best to wait for a breach of the invalidation level before counter-trend trading the Ethereum-based NFT Token. Invalidation of the bearish downtrend is a breach above $6.15.