Update: Gold attracted some dip-buying near the $1,760 region on Thursday and for now, seems to have stalled the post-FOMC retracement slide from the $1,787 area, or weekly tops. The US dollar witnessed aggressive selling and erased the previous day's hawkish Fed-inspired gains to one-month tops. The US central bank indicated that it will likely begin reducing its monthly bond purchases toward the end of this year. This, however, disappointed some investors expecting an immediate start to the withdrawal of the massive pandemic-era stimulus and prompted some profit-taking around the greenback. This, in turn, was seen as a key factor that extended some support to the dollar-denominated commodity.

The uptick, however, lacked bullish conviction and runs the risk of fizzling out rather quickly amid the prevalent risk-on mood, which tends to undermine demand for the safe-haven gold. The global risk sentiment got a strong boost after the People’s Bank of China injected more money into the banking system, which eased concerns about the fallout from China Evergrande's debt crisis. This, along with a growing inclination among the Fed officials to raise interest rates in 2022, should act as a headwind for the non-yielding yellow metal. Hence, it will be prudent to wait for a sustained strength beyond the $1,780 area before positioning for the resumption of this week's rebound from over one-month lows.

Previous update: Gold price is attempting a tepid bounce but remains in the red for the second straight session ahead of the BOE monetary policy decision. The BOE could likely follow the Fed’s signal at tapering, in light of rising inflation expectations in the UK. However, the central bank decisions’ likely play a second fiddle to the persisting concerns over a potential default story of China Evergrande’s group. The updates on the US $3.5 trillion spending bill will be followed as well amid a bust docket this Thursday.

The Technical Confluences Detector shows that gold is struggling below immediate resistance at $1765, which is the convergence of the previous day’s low and SMA5 one-day.

On a firm break above the latter, gold bulls could test the powerful $1771 hurdle, where the Fibonacci 38.2% one-week, Fibonacci 23.6% one-day and SMA5 four-hour merge.

The next relevant upside barrier is seen at $1774, the confluence of the SMA10 four-hour and Fibonacci 38.2% one-day.

Gold price could face a wall of resistance around $1777 if the recovery momentum extends. That level is the convergence of the Fibonacci 61.8% one-day, one-month and SMA10 one-day.

To the downside, immediate support awaits at $1761, where the previous low four-hour meets with the pivot point one-day S1 and the Fibonacci 23.6% one-week.

A steep drop below the latter cannot be ruled, exposing the next support at $1752, which is the pivot point one-day S2.

The last line of defense for gold bulls is seen at the previous week’s low of $1745. 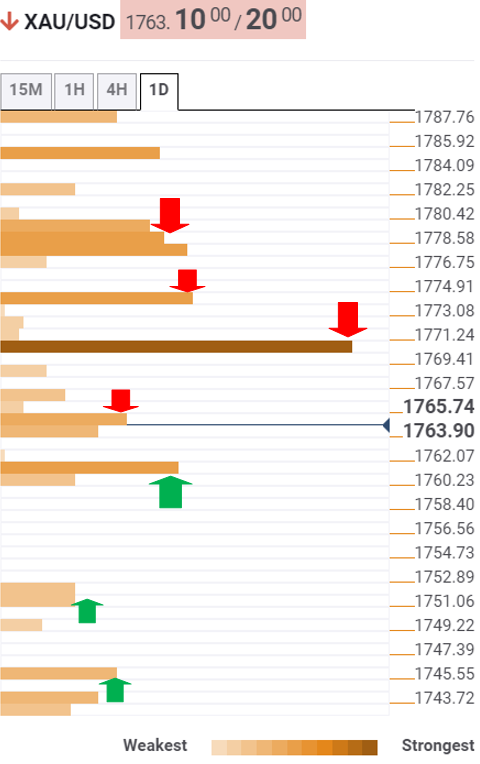