Update: Gold faded an early North American session bullish spike and refreshed daily lows in the last hour, with bears now eyeing a sustained break below the $1,800 mark. Gold, which is often considered as a hedge against inflation, benefitted from an unexpected rise in the US consumer price data. In fact, the headline CPI smashed market expectations and accelerated to 5.4% YoY in June. Adding to this, CPI at the core level jumped 4.5% YoY during the reported month.

Meanwhile, the data further fueled market speculations that the Fed is moving towards tightening its monetary policy stance sooner than anticipated. It is worth recalling that the June FOMC meeting minutes released last Wednesday revealed that Fed officials agreed on the need to be ready to act if inflation or other risks materialize. This, in turn, provided a goodish lift to the US dollar and might keep a lid on any runaway rally for dollar-denominated commodities, including gold.

Even from a technical perspective, the commodity has been oscillating in a range over the past one week or so. This further makes it prudent to wait for a sustained break through the mentioned trading range before positioning for any meaningful appreciating move in the near term. Investors might refrain from place aggressive bets ahead of Fed Chair Jerome Powell's congressional testimony on Wednesday and Thursday, which will be closely watched for his response to the inflation figures. This, in turn, will play a key role in determining the next leg of a directional move for the non-yielding gold.

Previous update: After a negative start to a fresh week on Monday, gold price is back in the green zone, advancing towards two-week highs of $1818 ahead of the critical US inflation release. Though gold bulls may face an uphill battle, as the US dollar rebounds across the board amid a cautious market mood. Concerns over the rapid spread of the Delta covid strain on both sides of the Atlantic seem to dent investors’ risk appetite.

Gold traders remain cautious as well heading into the US CPI data, which may shed more light on the Fed’s timeline for monetary policy normalization. Fed Chair Jerome Powell's testimony before Congress on Wednesday and Thursday on the monetary policy and inflation outlook will also hold the key for gold’s next direction. Meanwhile, markets ignored upbeat Chinese exports data, which suggested a strong global economic recovery.

Read: Powell Preview: Three reasons to expect the Fed Chair to down the dollar

The Technical Confluences Detector shows that gold price is retreating towards powerful support at $1803, which is the convergence of the Fibonacci 61.8% one-day and SMA5 one-day.

The next support awaits at the intersection of the SMA50 four-hour and the Fibonacci 61.8% one-week at $1798.

Further south, the last line of defense for gold bulls appears at $1791, where the Fibonacci 23.6% one-month, SMA10 one-day and pivot-point one-week S1 coincide.

Alternatively, a firm break above a dense cluster of healthy resistance levels around $1812 could expose a fierce hurdle at $1815.

That level is the confluence of the pivot point one-day R1 and Fibonacci 38.2% one-month.

Buyers will then aim for the previous week’s high of $1818. 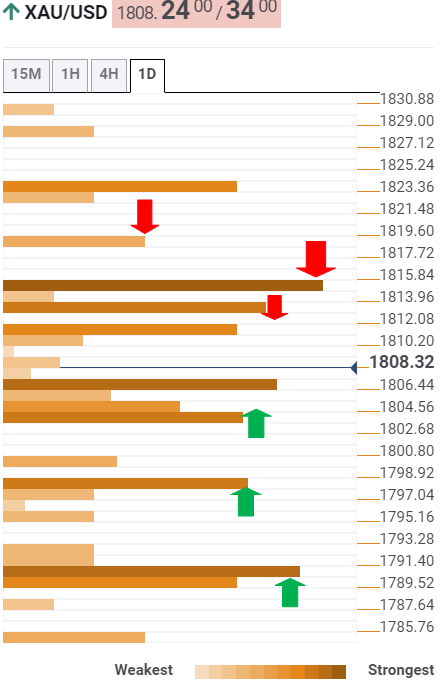