Gold (XAU/USD) has regained ground above the critical $1950 level, as the US dollar remains on the defensive amid a typical pre-FOMC nervousness. Traders probably debate the extent of Fed’s dovish stance, as the world’s most powerful central bank is likely to keep interest rates lower for a prolonged period.

Fed’s economic projections and forward guidance will be closely eyed for fresh direction in gold. An uncertain and downbeat outlook on the economy could strengthen the bullish momentum in the metal. How is gold positioned on the charts in the lead up to the Fed showdown?

The Technical Confluence tool shows that gold is heading back towards the critical barrier at $1969, which is the convergence of the pivot point one-week R1 and Bollinger Band one-hour Upper.

A firm break above that level is needed to take on the upside once again, with the previous day high of $1972 likely to offer immediate resistance.

Thereafter, the bulls could extend control towards $1982, which is the pivot point one-day R2.

On the flip side, the immediate cushion is seen at $1958.50, where the Fibonacci 38.2% one-day and Bollinger Band one-hour Middle coincide.

A bunch of support levels stacked up at $1945/44 is the level to beat for the bears. That area is the confluence of the Fibonacci 38.2% one-month, one-week and pivot point one-day S1. 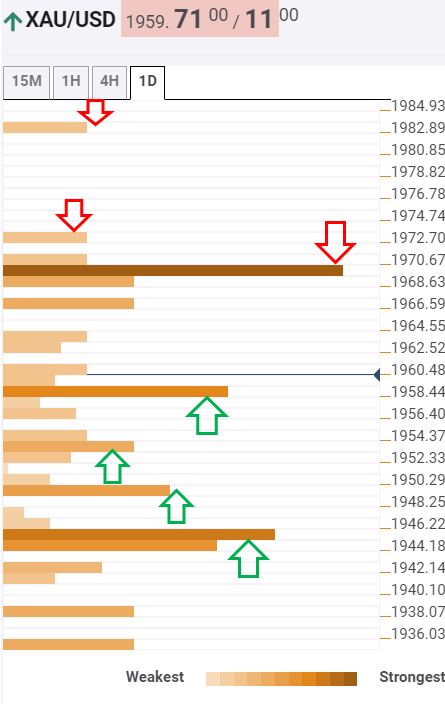 About the Confluence Detector

The TCI (Technical Confluences Indicator) is a tool to locate and point out those price levels where there is a congestion of indicators, moving averages, Fibonacci levels, Pivot Points, etc. Knowing where these congestion points are located is very useful for the trader, and can be used as a basis for different strategies.