Apple releases earnings after the close on Tuesday and, as ever, the results are highly anticipated. The mega-tech behemoth is always high on investor lists as a bellwether for the overall tech sector and also a leading indicator of consumer sentiment. Further explanation in relation to new products and those pesky chip shortages will be closely watched in the post-earnings conference webcast. The details for the webcast can be found here.

Apple reports results tomorrow Tuesday, July 27. Earnings Per Share (EPS) is expected to come in at $1.01 with revenue forecast at $72.93 billion. The previous two earnings releases have not been kind to AAPL stock price, with the last release in April seeing Apple shares fall from $137 to the low $120s despite results coming in over 40% ahead of those famed Wall Street analyst expectations. The prior release on January 27 2021 saw earnings come in 20% ahead of analyst forecast but, again, the Apple share price declined, moving from $145 to the low $120s again.

This time it all has an eerily familiar look to it with AAPL stock sitting just at all-time highs ahead of an earnings release. So, to continue the momentum, Apple will need to see another significant beat. Based on the previous release which was 40% ahead and saw an announcement of buybacks and dividends it is a tough act to follow.

As mentioned above in our look back to the previous two earnings releases, which both saw a retracement to the low $120s, this is a strong support zone. The volume profile shows a large amount of volume from $127 to $120. So, it is no surprise that this zone has seen any falls in the share price stop and regrouping for a move higher.

Support at the $135-137 region is also strong again being a zone of high relative volume and also breaking $137 was the catalyst for this current rally to all-time highs. That is the first support zone with the second stronger one being the low $120s. The point of control for 2021 is at $133.81, this is the price with the highest amount of volume in 2021 so an equilibrium of sorts.

The Moving Average Convergence Adivergence (MACD) is crossing to a bearish signal so keep an eye on this. Relative Strength Index (RSI) and Commodity Channel Index (CCI) which are two overbought or oversold indicators are in neutral territory.

The biggest potential factor to be watched is if the share price retreats, then it will see a double-top form. This is a strongly bearish signal. 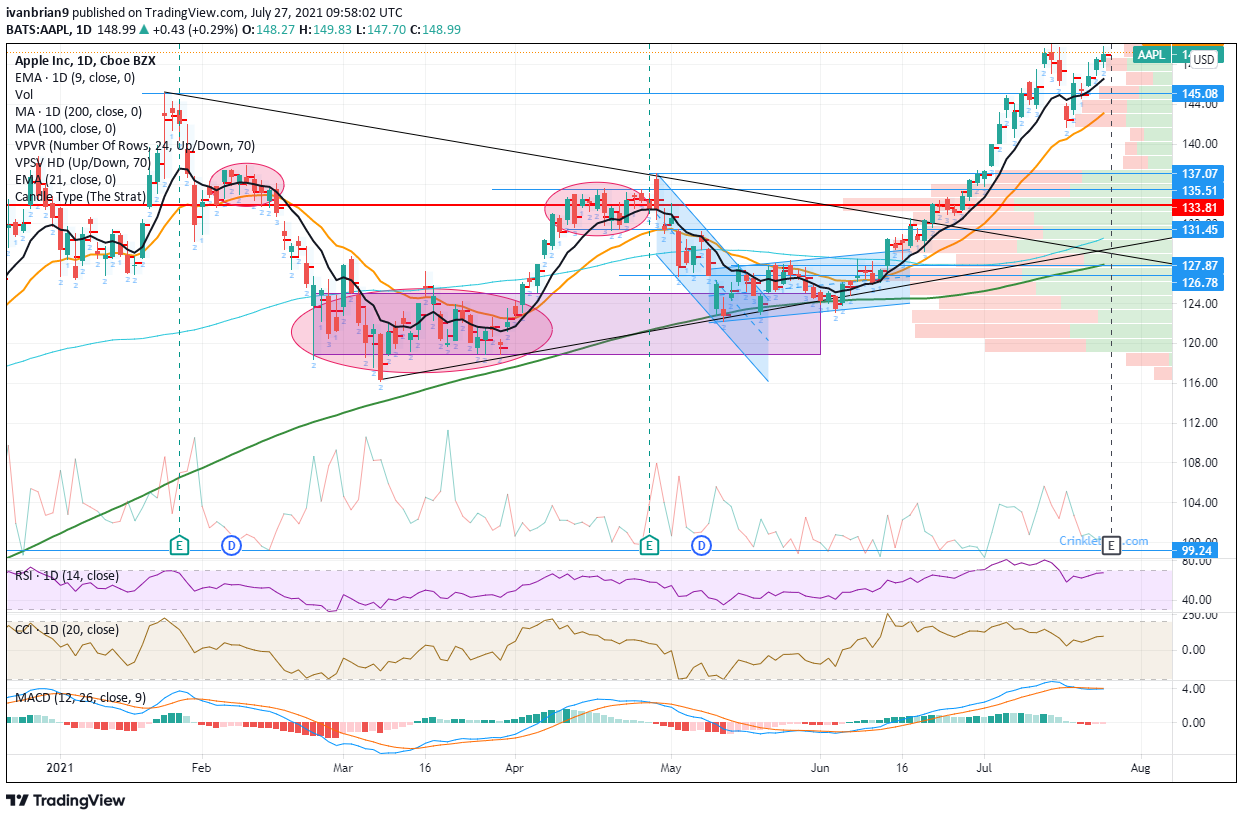