The cryptocurrency market has been on fire recently. Bitcoin broke above the critical resistance of $12,000 and tested a new high of 2020, with all major altcoins following the lead.

The total capitalization of all digital assets in circulation increased to $394 billion, having gained over $40 billion in the last seven days. The market has mostly recovered from the previous week's losses incurred by the news that one of the most popular cryptocurrency exchanges, OKEx, suspended all digital assets/cryptocurrency withdrawals.

The best performers of the week are Litecoin, Chainlink, and Wrapped Bitcoin. These altcoins managed to capitalize on the crypto market recovery.

LTC beats the market with 18% gains

At the time of writing, LTC/USD is changing hands at $56.9. The 8th largest digital asset, with the current market capitalization of $3.2 billion, has gained over 18% in the last seven days to become the best-performing altcoin of the week out of top-50.

On the intraday charts, LTC/USD is trying to move above the local resistance line at $56.8. Once it is out of the way, the upside is likely to gain traction with the next focus on  $64. This barrier limited the coin's recovery during the August consolidation pattern. A move higher will bring $69 (the highest level of 2020) and $70 into focus. 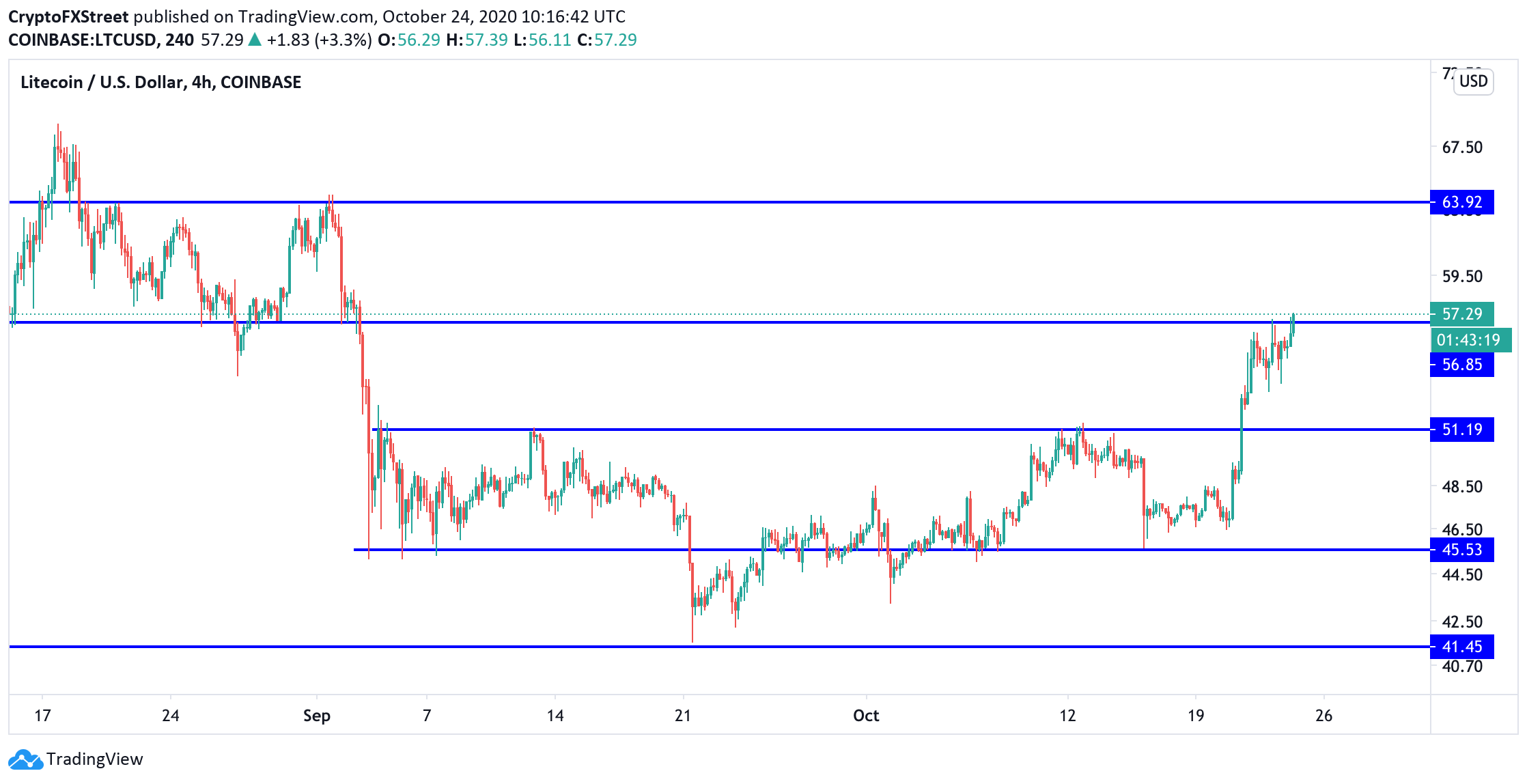 On the upside, the initial support comes at $51. This level served as a formidable resistance during the best part of September and October until it was broken on October 21 amid the strong rally across the board.  A sustainable move below this area will invalidate the short-term bullish scenario and allow for a deeper decline to $45.5, followed by $41.5.

The on-chain data shows that an important resistance area is located on the approach to $60, as over 74,000 addresses holding over 2.6 million coins have their breakeven point there.

However, on the downside, the first supply area comes on approach to $54, as over 3.7 million coins were bought around this price. The next supply wall is seen around $51, which coincides with the technical barrier mentioned above.

Chainlink is unstoppable once $13 is cleared

Chainlink (LINK) is another top-performer of the week. The 6th largest digital asset has gained over 16% in the last seven days to trade at $12.30 by press time. LINK's market capitalization is registered at $4.8 billion, while its average daily trading volume is 1.47 billion, in line with the long-term figures. 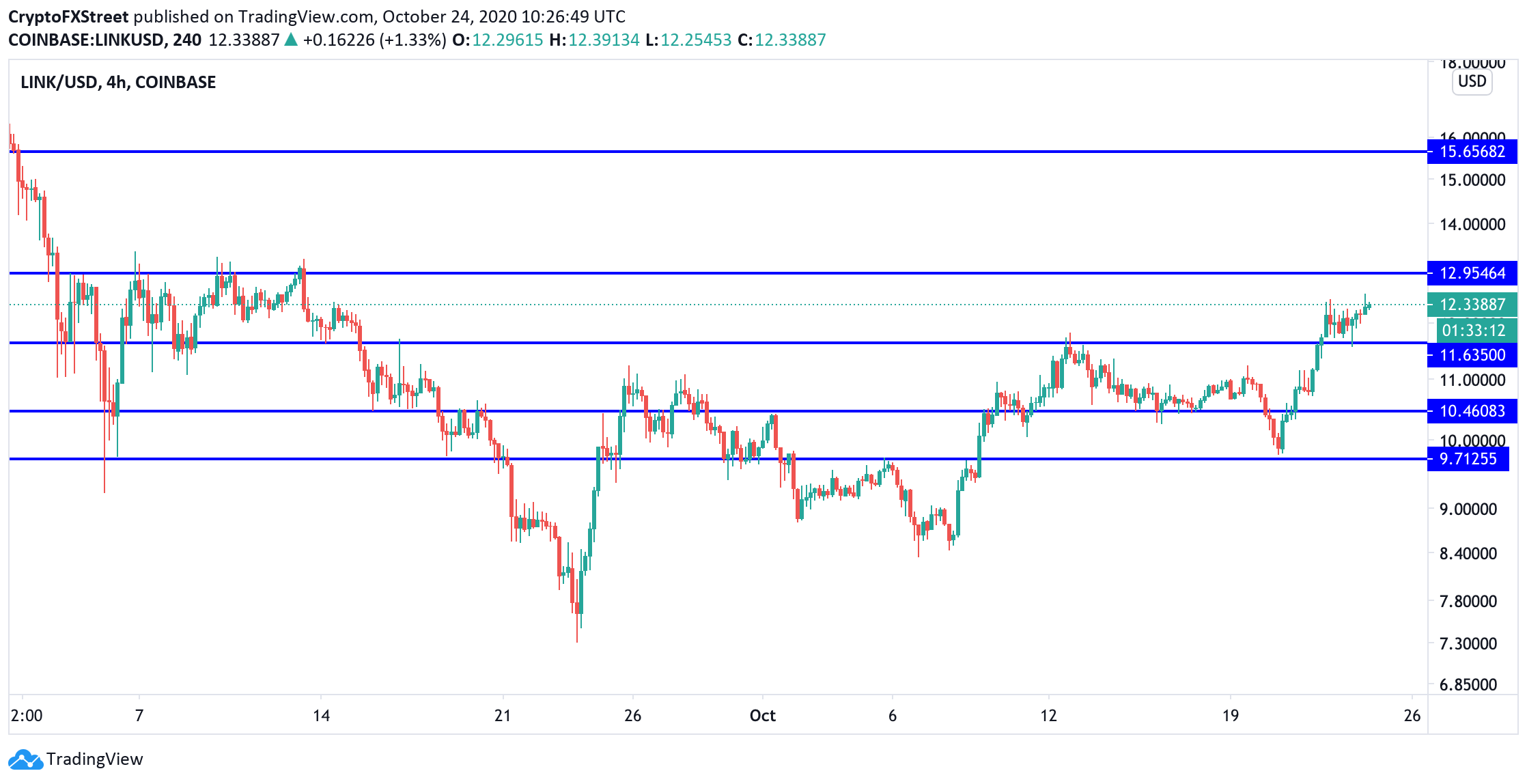 On the intraday chart, LINK/USD broke above the resistance of $11.6 with the next bullish target created by a psychological $13. This barrier limited the recovery at the beginning of September andmay trigger the downside correction if the LINK's bullish trend fails to gain momentum. Once it is out of the way, the upside is likely to gain traction with the next focus on  $15.6.

On the downside, the initial barrier is created by the above-mentioned $11.6 that served as channel support in September.  A sustainable move below this area will trigger more sell-off to the psychological $10 and $9.70.

The data on In and Out of the Money Positioning (IOMP) confirms that there is s a strong barrier located on the approach to $13 as over 4,000 addresses holding nearly 17 million coins have their breakeven point there. Notably, there are no significant barriers above this area.

On the downside, the strongest supply zone comes on approach to $10.00.

Wrapped Bitcoins (WBTC) is a tokenized version of Bitcoin that runs on the Ethereum blockchain. Basically, it is backed by BTC, and its price is following the price of BTC, which makes it similar to a stablecoin. Currently, there are over 110 095 WBTC in circulation, while their average daily trading volume amounts to $29 billion. For the sake of comparison, Bitcoin's average trading volume comes at $27 billion.

The DeFi boom explains the growing popularity of tokenized Bitcoins as it allows BTC holders to participate in the new lucrative industry without converting their tokens into ETH or other coins.