Bitfinex became the fourth major cryptocurrency exchange to list SushiSwap after Binance, Huobi, and FTX. With SUSHI price up almost 40% in the last 24 hours, it might be poised for further highs as it penetrates a new market.

SushiSwap is an automated market maker [AMM] and a decentralized exchange [DEX] with SUSHI as its native token. Although this altcoin is intended to perform several functions, its utility can be boiled down to a primary value proposition: protocol ownership. SUSHI holders receive revenue shares from the exchange's fees and participate in the platform's governance proposals.

The hype around the project has faded since the DeFi summer last year, but it is slowly turning the tide with multiple partnerships strengthening its fundamentals. A significant exchange listing like Bitfinex could help the protocol regain bullish momentum to top off the developments, especially when considering that Uniswap's price doubled in less than 48 hours after it was listed on Bitfinex. Hence, it is likely to expect a similar price action for the newly listed SUSHI token.

Higher highs on the horizon

SUSHI price currently sits at $4.47 after surging a whopping 40% in the past 48 hours. While the recent Bitfinex listing can be regarded as a positive sign, the technicals also point to a bright future.
For instance, the Parabolic SAR and the MACD suggest further gains on the horizon after turning bullish on January 12. The SuperTrend indicator could also flash a buy signal if SushiSwap can close above $4.70, but doing so will not be easy SUSHI/USD 4-hour chart 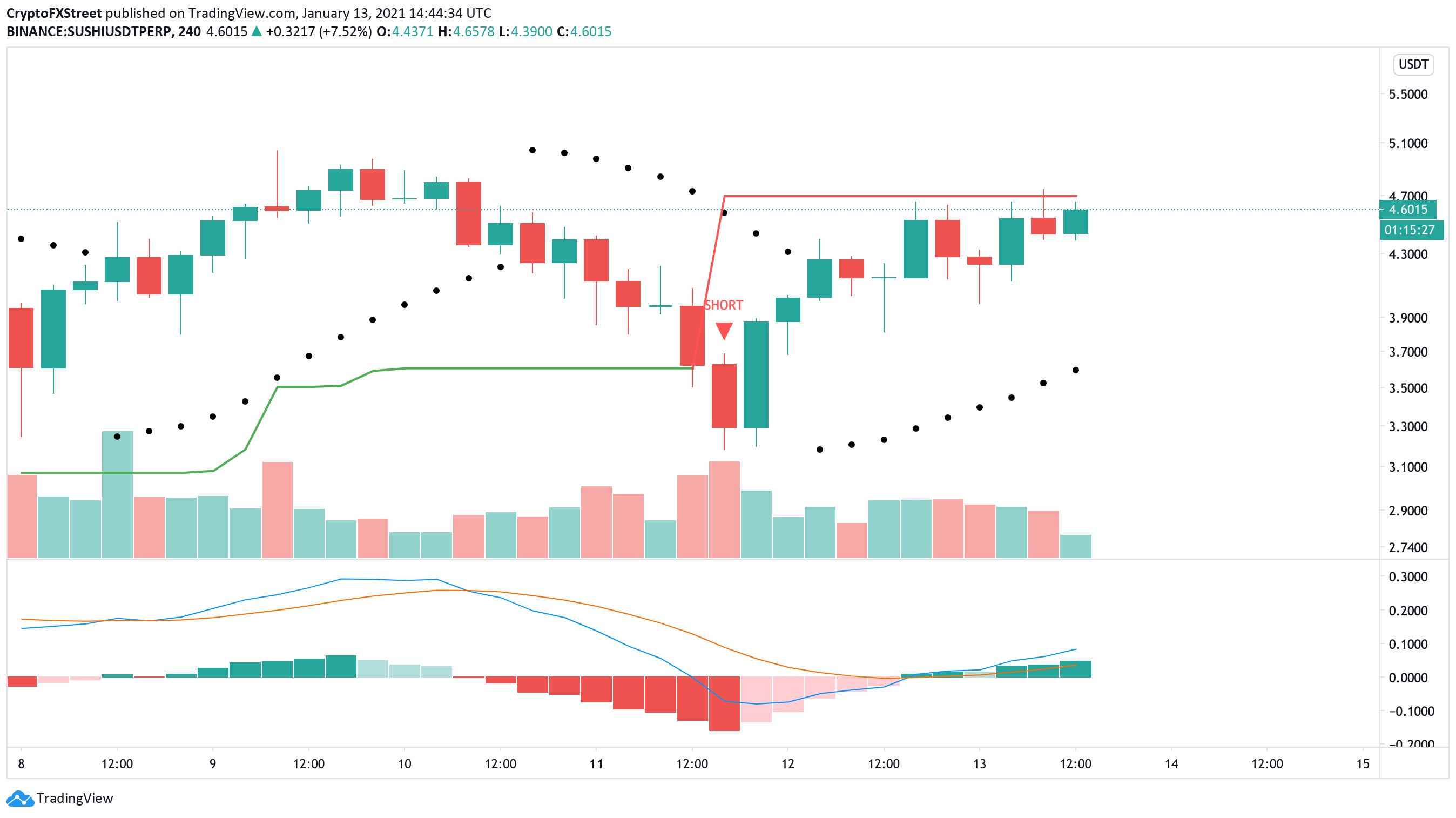 IntoTheBlock's In/Out of the Money Around Price (IOMAP) model suggests that the $4.70 level is a major resistance barrier ahead of SushiSwap. Here, roughly 1,300 addresses had previously purchased 7 million SUSHI. Holders who have been underwater might want to break even at these levels, keeping rising prices at bay.

Therefore, only a 4-hour candlestick close above $4.70 will serve as confirmation of the optimistic outlook. If this were to happen, SUSHI price could rise to the next important interest area at $6.

It is worth noting that SushiSwap sits on top of stable support based on the IOMAP cohorts. This on-chain metric shows that 445 addresses bought 1.62 million SUSH around $4.40. As long as this support level holds, the bullish outlook will remain intact. Failing to do so could see the DeFi token drop towards $4.00.