The Securities & Exchange Commission (SEC) v. Ripple case has taken a turn as the judge on the case granted the power to a prominent XRP advocate and lawyer representing many of the cryptocurrency’s holders to be a part of the ongoing legal battle.

John Deaton, a lawyer who represents XRP token holders wishing to insert themselves in the ongoing lawsuit filed by the SEC, has been granted “amici status” by US District Judge Analisa Torres.

Deaton and XRP holders would be allowed to act as “friends of the court,” by assisting the court in briefing legal issues relevant to the case. However, these legal issues must be first approved in advance by the court.

According to the order by the judge, the court believes that this type of assistance would be beneficial during the briefing of dispositive motions. The order further stated that it may also exercise its discretion to request or deny further applications.

Another notable lawyer familiar with the case, James Filan commented that this is a “huge win” for the XRP community, because the interests of the Ripple executives and the community are aligned.

However, it is also worth noting that the XRP holder’s motion to intervene in the case is denied despite the capacity to be involved in the case as amici curiae. The court further stated that in order to maintain the balance between the parties and Ripple investors, the court will not allow the community to offer evidence or present witnesses.

XRP price has broken out of the symmetrical triangle pattern and attempted to reach the bullish target set out by the governing technical pattern. However, Ripple fell short of reach as strength declined, as the bulls are catching their breath before the next run-up.

The optimistic target set out by the triangle pattern was set at $1.11, where the 100 twelve-hour Simple Moving Average (SMA) sits.

Currently, Ripple is consolidating and accumulating strength before its next move as it continues to trend sideways. XRP price is ranging between the 27.2% and 38.2% Fibonacci retracement levels at $1.01 and $1.07, respectively. The former acts as the first line of resistance for the token, where the 50 twelve-hour SMA rests. 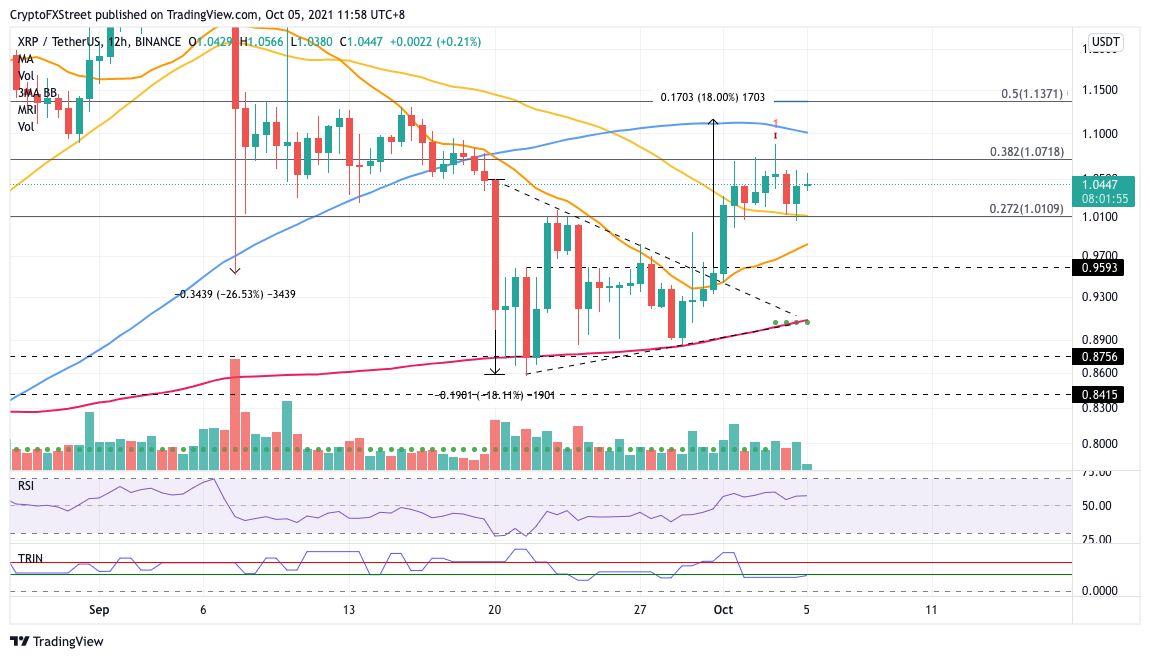 Should XRP price be faced with increased selling pressure following its rally, Ripple would discover further support at the 20 twelve-hour SMA before dropping toward the September 21 high at $0.95. If the bears were to continue to take control, the token would discover a strong foothold at the apex of the triangle, where the support line given by the Momentum Reversal Indicator (MRI) and 200 twelve-hour SMA coincide.

The next target for the bulls is to break above $1.07 resistance and tag the 100 twelve-hour SMA at $1.10. Further buying pressure may incentivize XRP price to shoot for the 50% Fibonacci retracement level at $1.13.