Major equity markets in Asia have declined significantly in recent months, and bitcoin has followed a similar pattern.

Prices: In a slow but surprisingly volatile session, bitcoin fell to a six-week low around $38,200 before quickly recovering back above $40,000.

Insights: Crypto had a slow start to the week in Asia amid ongoing fears about COVID-19 lockdowns in China.

Technician's take: BTC's price range could persist for another week.

Bitcoin (BTC), after a big price swing over the past week, traded earlier Monday at its lowest point since mid-March but quickly recovered.

As of press time the largest cryptocurrency by market capitalization was up 2.4% in the past 24 hours, trading at $40,485. Earlier, the bitcoin price fell as low as $38,202, the lowest in almost six weeks.

“Recent volatility has been driven by factors such as inflation, the Ukraine crisis as well as contractionary monetary policies,” said Daniel Khoo, research analyst at Nansen. “This has affected not only the stock market but also the crypto market, which seems to follow in tandem recently.”

Khoo said the fall in prices could be driven by the short-term negative sentiment as people go risk-off on volatile assets. “Many investors are also shifting towards [stablecoins] given the uncertainty and short-term bearish outlook, as the market has become too hot and periods of extreme euphoria were followed by market corrections historically,” Khoo said.

Slow Start to the Week for Crypto in Asia

Bitcoin’s correlation with the stock market has created a circular economy with China – even though trading the asset is officially banned in the country.

As lockdowns continue in Shanghai with possible expansions elsewhere, the CSE 300, a benchmark index of the 300 largest stocks in China, was down 3% while the Hang Seng Index, Hong Kong’s stock index, dropped 2%. 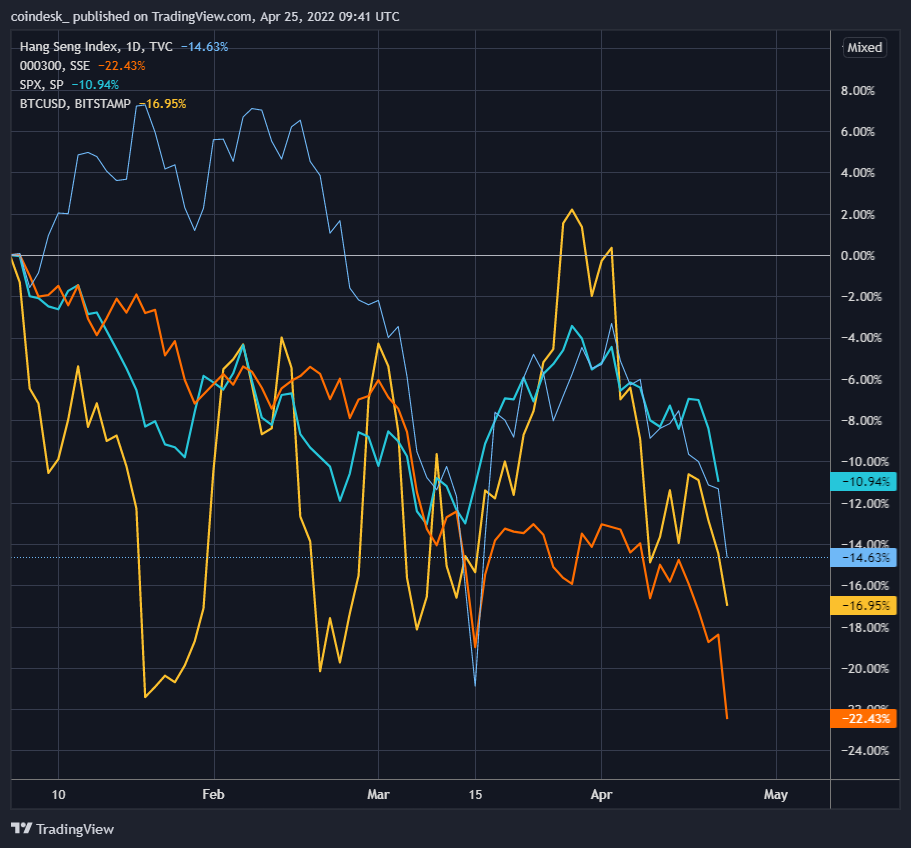 This continued decline in China stocks has now reversed gains made in March when the government pledged to support the market to fight off a double-whammy of U.S. threats to de-list China stocks and continued COVID-19 fears.

The S&P ended last week down 2.7%, partly due to China’s uncertain macroeconomic environment.

Bitcoin, in turn, fell 1% during Monday’s Asia trading day, and pushed further down throughout Monday trading in the U.S. At time of writing, it was up 2.4% to $40,485. Metaverse major Axie Infinity shaved 10% off its value during trading on Monday in Asia while NEAR and NEO, tokens associated with layer 1 blockchains, declined 10% and 9.3%, respectively.

So as the stock indexes of the world’s largest economy nervously watch those in the world’s second-largest to see how this next and hopefully final chapter in the coronavirus plays out, bitcoin is caught in the middle.

It is a reversal, mind you, from March when it was China markets moving up and U.S. stocks staying flat. Bitcoin didn’t follow the trend because it trades in response to U.S. movement – but now the "circular economy" of China bringing down the U.S. market has in turn brought down bitcoin in this session.

Bitcoin (BTC) is stabilizing after a 3% decline over the past week. Short-term buyers have returned around the $37,500 support level, although resistance at $43,000 could stall an upswing in price.

Momentum signals remain neutral on the charts, which typically precedes a period of rangebound price action, similar to what occurred between May and July of last year.

BTC is roughly two weeks away from registering a countertrend bullish signal, per the DeMARK indicators. If confirmed, buyers could begin to accumulate ahead of a seasonally strong period in May.

Still, bearish signals on the monthly chart suggests limited upside for BTC beyond the $50,966 resistance level.

Crypto Bahamas conference with investors, developers and other blockchain leaders