Crypto mining aided Nvidia's bottom line, but it hasn't been a major cause of the stock's steep decline. Ether falls but hovers around $1,200.

Prices: Bitcoin falls but stays well above $20,000. Other major cryptos are in the red.

Insights: Crypto helped Nvidia's bottom line, but it hasn't been a major cause of the stock's steep decline.

Bitcoin Falls but Remains Near $21K; Other Cryptos Fall

Bitcoin fell on Monday but remained comfortably above the $20,000 threshold it crossed more than a week ago.

The largest cryptocurrency by market capitalization was recently trading at about $20,800, down over 1% in the past 24 hours. Ether, the second-largest crypto by market cap, was changing hands at roughly $1,200, down less than a percentage point but about the same level it has held for the past week, as investors continued their cautious approach to riskier assets. Trading was light.

"People are still using the next several months to determine where this is going, where this will bottom out, not just in crypto," Hany Rashwan of 21Shares told CoinDesk's First Mover program, noting recent months' correlation to equity markets that rebounded last week after months of almost nonstop declines.

Other major cryptos were also in the red with celsius (CEL), the token of Celsius Network, a troubled crypto lender, falling by as much as over 16% and UNI dropping nearly 11%. MATIC – a big winner last week after Polygon, the project the token represents, introduced a privacy product for decentralized autonomous organizations (DAOs) – returned a sizable portion of its gains, also tumbling about 11% at one point.

Large-scale stock indexes dropped slightly with the tech-heavy Nasdaq and S&P 500, which contains a heavy tech component, both down less than a percentage point. The latter closed Friday with its biggest single-day gain in two years amid the revision of a major report showing consumers slightly more upbeat about the future rate of inflation and small signs of an economic cooling that might enable the U.S. central bank to scale back its monetary hawkishness later in the year.

The U.S. Census Bureau durable-goods report released Monday showing orders climbing higher than anticipated in May and a rise in pending-home sales for the month, according to the National Association of Realtors countered this trend.

Despite recent debacles in the crypto space, including the implosion of the TerraUSD stablecoin (UST) and liquidity problems of Three Arrows Capital, some analysts struck an optimistic note, particularly about DeFi projects which have weathered recent storms. In a market recap, Arca Research's Chief Investment Officer Jeff Dorman highlighted the 20%-30% spike in some cases last week for digital assets, "led by the most beaten-down sectors, DeFi and NFTs/Gaming."

"The cynic in me would dismiss these gains as a 'bear market rally' or merely short-covering, but the bull case is that DeFi protocols and applications did their job while their centralized exchange/lending platforms (CeFi) did not," Dorman wrote. "That’s what led to the bounce in DeFi, which trickled down to the rest of the market.

Dorman added: "The carnage in the past six weeks has been very real, but every company that is currently facing solvency or going concern issues is a centralized company with a CEO, a board of directors, and human decision-makers. Not a single line of code from DeFi or a smart contract is capable of making the costly decisions that these companies made."

Despite GPU’s Ties to Mining, Nvidia Isn’t Much of an Ethereum Macro Proxy

A few years ago, it was nearly impossible to buy a graphics processing unit (GPU) add-in board (AIB) for your PC.

Gamers who wanted to upgrade their PC were simply out of luck. General purpose GPU compute (GPGPU), the ability to harness the chip’s ability to do massive amounts of parallel computation, is just as important for crypto mining as it is for creating photo-realistic graphics for games. So miners bought all they could, displacing gamers in the process.

Nvidia, which makes the GPU chip and its add-in board partners and which make the card itself, had quite the bull run with stocks of Gigabyte, MSI, and Zotac experiencing double-digit gains. Nvidia tried to downplay its exposure to crypto, and that ultimately led to a fine from the U.S. Securities and Exchange Commission. The data, however, doesn’t lie: The company sold more cards because of crypto mining. 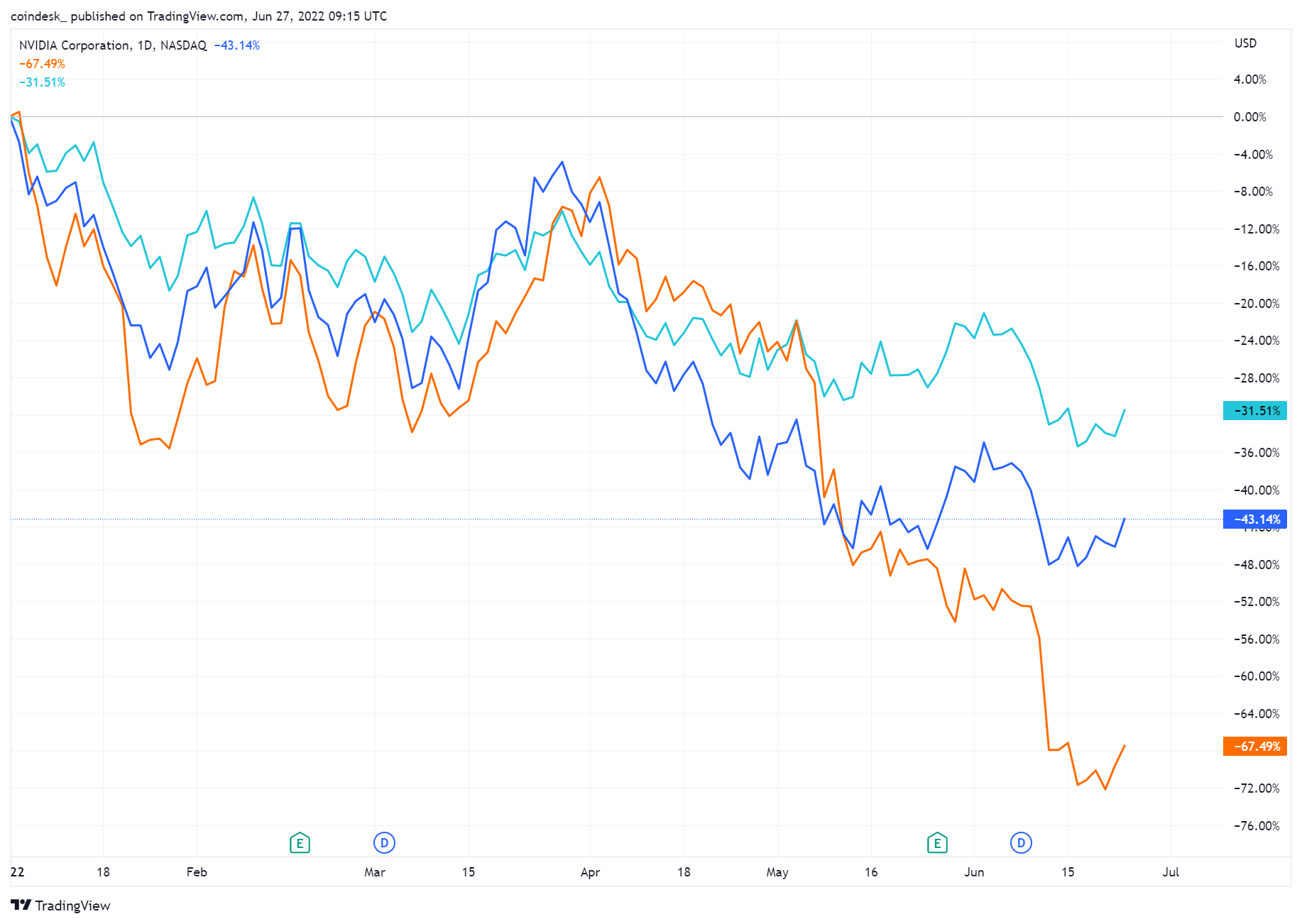 But let’s be clear: Nvidia isn’t a mining company or a proxy thereof. Its stratospheric rise from a $5 stock at the beginning of 2015 to nearly $330 at the end of 2021 isn’t just because of mining, although mining did make a material impact on the income statement. Rather, the same technology, GPGPU Compute, was a Cambrian explosion-like event that unlocked a world of efficiency increases in data centers, allowing for massive advances in things like artificial intelligence and big data.

Data center has become the largest segment for Nvidia, surpassing gaming, last quarter. That has been in the works for a while, as the segment has been posting double-digit growth since 2018. That also means that Nvidia is exposed to slowing investments in data centers as a technology-led recession rips through Wall Street. Research firm Gartner put the growth in IT spending at 9.5% in 2021 and predicts that growth will slow to 4% in 2022.

So while crypto and mining added to Nvidia’s bottom line, it's not the reason why the company’s stock has led the board in declining tech stocks.