The world's largest cryptocurrency by market cap traded in tandem with tech stocks, which also declined. 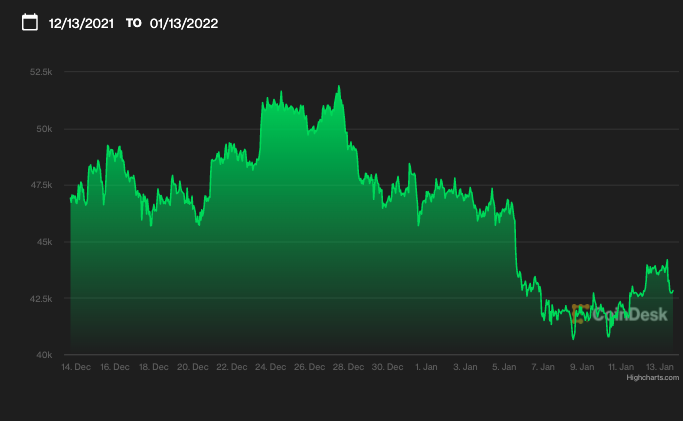 Chart of bitcoin's price over the past month. (CoinDesk)

Bitcoin (BTC) slid on Thursday, erasing the prior day's gains but staying within the past few weeks' trading range of roughly $40,000 to $44,000.

News in the market included a potential ban on the use of cryptocurrencies in Pakistan along with signs that bitcoin miners are increasing their accumulation of the cryptocurrency, apparently refusing to sell at current prices.

A prominent Wall Street commodities analyst said that bitcoin is likely to outperform the raw materials staples oil and copper over the coming decade.

Tether said it froze $160 million of its dollar-linked stablecoins USDT on the Ethereum blockchain, while CoinDesk columnist David Morris weighed in on bitcoin, inflation and the expectations game.

But the likely culprit of bitcoin's slide on Thursday was that it traded in tandem with tech stocks, with the Nasdaq 100 suddenly swooning on investor fears that the Federal Reserve will move within the next few months to start raising interest rates for the first time since 2018.

Mary Daly, president of the Federal Reserve Bank of San Francisco, told Reuters in an interview that it "seems a quite reasonable thing" to start raising interest rates in March.

A tightening of monetary conditions by the Federal Reserve could put downward pressure on prices for risky assets, from stocks to cryptocurrencies, while also curbing inflation – potentially reducing the appeal of bitcoin, which has been bought by many investors as a hedge against inflation, which is rising at its fastest pace in nearly four decades.

Is that a bullish sign, or bearish? Time may tell.

"It does feel like markets are at peak fear on U.S. monetary policy which could make relief rallies more likely," Craig Erlam, an analyst for the foreign-exchange brokerage Oanda, wrote Thursday in a market update. "But there is also underlying anxiety in the markets that could make for some volatile price action for the foreseeable future."

Erlam predicts that if bitcoin could break above $45,500, "we could see another sharp move higher as belief starts to grow that the worst of the rout is behind it." 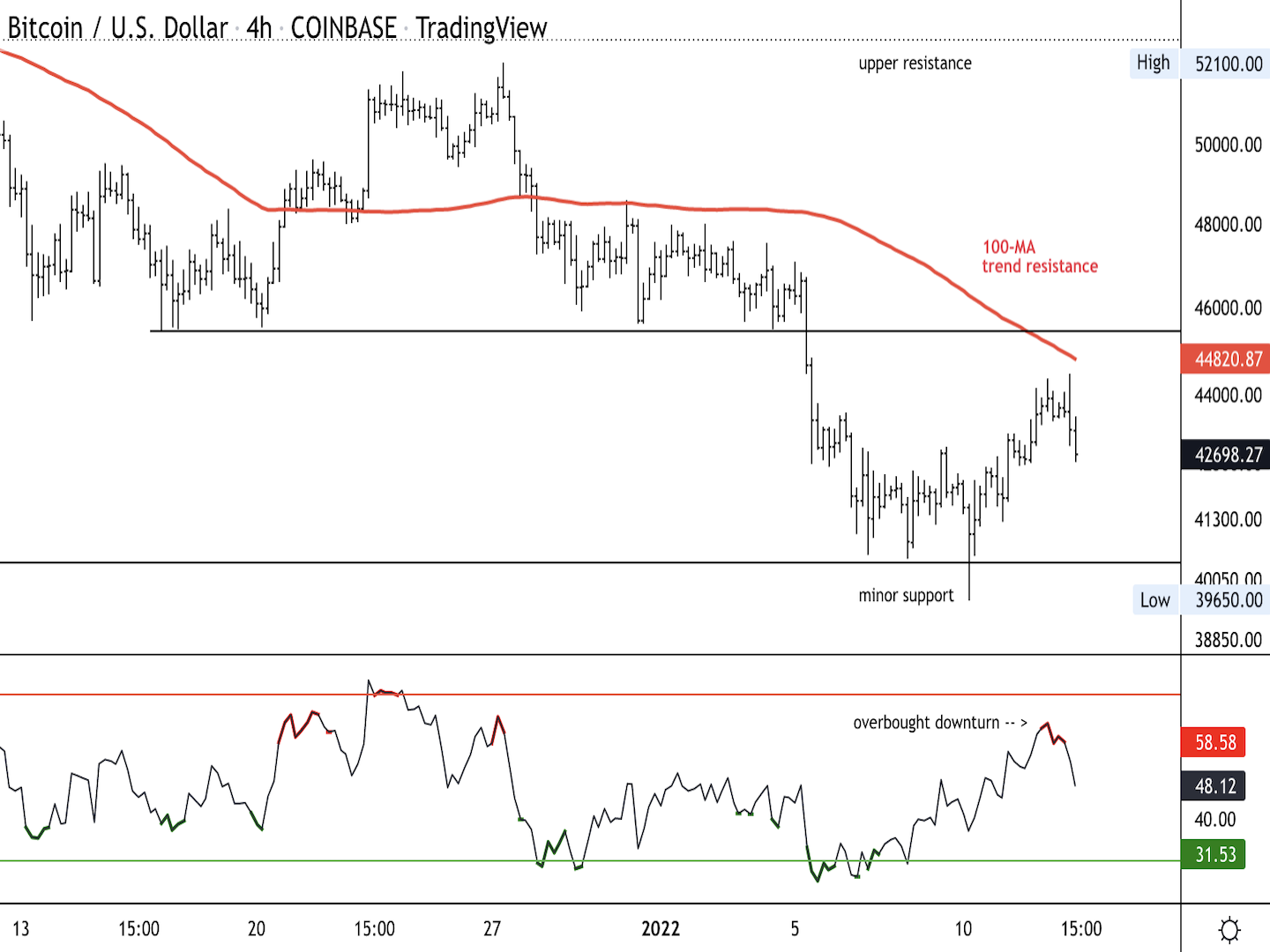 The cryptocurrency remains in a short-term downtrend, although support at around $40,000 could stabilize the pullback.

BTC is down about 2% over the past 24 hours and is roughly flat over the past week. A decisive break above $45,000 is needed to reverse the short-term downtrend, but slowing momentum suggests price weakness could persist into the Asia trading day.

The relative strength index (RSI) on the four-hour chart declined near overbought levels, similar to what occurred in late December, which preceded a pullback in price. Buyers will likely remain on the sidelines until oversold conditions materialize, most likely over the next few days.