Bitcoin Price Prediction: BTC/USD retreat could be necessary for recovery to $9,000 - Confluence Detector

Bitcoin went crazily bullish for almost two days this week. The surge saw Bitcoin price rise to levels not reached since last November. For now, BTC/USD is dancing at $8,615 after losing 2.26% of its value on Wednesday.

The confluence tool places the initial hurdle at $8,652. This zone is home to a cluster of key indicators, including the Bollinger Band daily upper, previous high 15-minutes, SMA five 15-mins, SMA ten 15-mins and the Bollinger Band 15-mins middle. The indicators converge to form the most prominent resistance. Therefore, if broken, Bitcoin could easily tackle the medium strong resistance at $8,742 in readiness for a fly past $9,000. 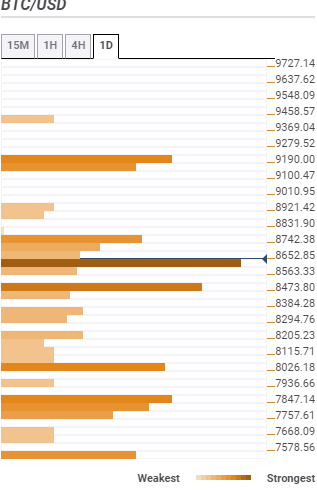 Ripple's XRP, now the 3d largest digital asset with the current market value of $10.1 billion has gained over 7% in recent 24 hours. The coin touched the highest level of 2020 at $0.244 on Tuesday and retreated to $0.2323 by the time of writing. The coin has been moving in sync with the global cryptocurrency market, driven by a strong wave of bullish sentiments.

Litecoin Price Analysis: What are the odds of LTC/USD smashing above $60?

Litecoin, alongside, most of the cryptocurrencies in the space is dealing with increasing selling pressure. The selling activity appears to be a reflex action after the cryptos surged above key resistance zones to post new 2020 highs. Litecoin, for example, has grown significantly from the levels at the beginning of August under $40 to brush shoulders with the resistance at $60.

BTC/USD hit the intraday high above $11,400 during early Asian hours and retreated to $11,226 by press time. The first digital coin has stayed unchanged on a day-to-day basis and since the beginning of the day, moving within a short-term bullish trend amid low volatility.

All phases of Ethereum 2.0 will positively impact the network – Analyst

The anticipation of Ethereum 2.0 is continuing to rise as the activity on the network is surging. Kelvin Koh, the co-founder of venture capital firm Spartan Group, has recently said that ETH 2.0 will have play a key role in the growth of the network.

Ethereum Classic (ETC) settled in a range above $7.00 after wild price swings on the weekend. At the time of writing, ETC/USD is changing hands at $7.20, mostly unchanged both on a day-to-day basis and since the beginning of Tuesday.

ADA/USD bulls remain in control as price goes up

Cardano successfully launched the Shelley hard fork a few days back and it currently has >620 active stake pools. These pools have a total of 2.74 billion ADA committed to staking. According to ...