TRX price could shock the world

Tron’s TRX price has been coiling in a mundane fashion for most of the summer. When reviewing the macro technicals, it appears that a triangular pattern is taking place, justifying the lackluster price fluctuations.

Since 2020, TRX price has rallied 2,000 percent to  all-time highs at $0.18. If the  Elliott Wave Theory is correct, an additional 2,000% rally could be in the cards providing that the bulls can establish a successful weekly close above $0.12895, which is currently 100% above the current market value. The five-month unfolding triangle could be the catalyst to induce a 180% rally into the macro confirmation zone. The volume profile shows a significant tapering pattern which confounds the bullish macro idea 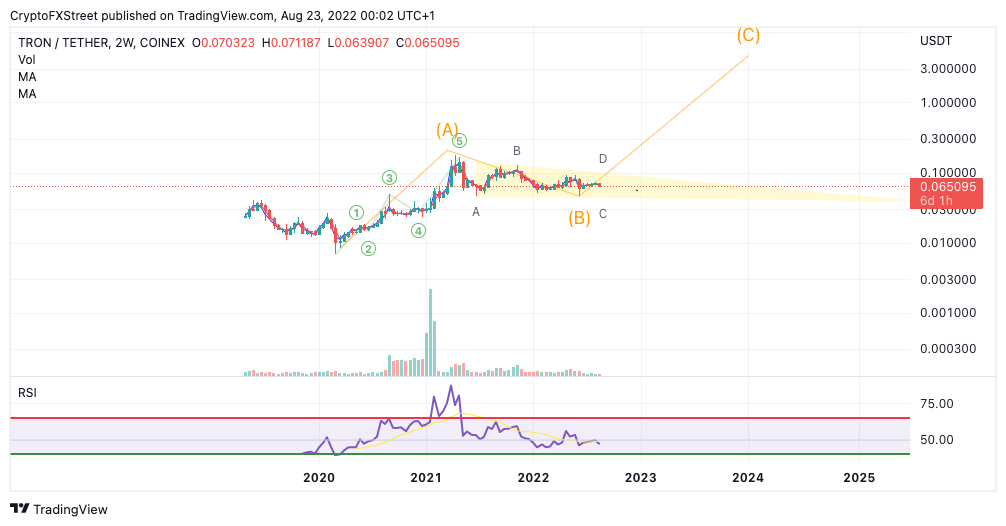 Because the triangle breakout has not occurred at time of writing, traders in the market should keep a wider invalidation point at $0.0468. Under no circumstances should this level get breached. In doing so, the bears would completely invalidate the triangle idea and could prompt further decline into the $0.0250 area zone, resulting in a 60% decline from today’s current price.

In the following video, our analysts deep dive into the price action of TRON, analyzing key levels of interest in the market - FXStreet Team