The crypto exchange is cutting 30% of its global staff. ALSO: Bitcoin surges along with equity markets on the Federal Reserve Chair’s dovish tone in a speech Wednesday.

Crypto exchange Kraken is laying off 30% of its global staff – around 1,100 people – in response to the crypto market downturn, the company said Wednesday.

Crypto prices rise: Bitcoin (BTC) cracked the $17,000 threshold for the first time since the early part of November. The largest cryptocurrency by market capitalization was recently trading at about $17,060, up 3.6% over the past 24 hours. Ether (ETH), the second-largest crypto in market value, was recently changing hands just below $1,300, a 6.6% gain from Tuesday, same time. Other cryptos were largely moving upward, with UNI, the token of the smart contracts-based Uniswap platform, up more than 6% and popular meme coin DOGE rising more than 3%.

But November is dismal: Bitcoin fell in value by more than 18% for the month and ether tumbled 21% amid the collapse of crypto exchange giant FTX and the ensuing fallout. FTX filed for Chapter 11 bankruptcy protection little more than a week after CoinDesk reported irregularities on the balance sheet of its trading arm Alameda Capital, and other companies with exposure to FTX have been forced into survival mode. Still, a few tokens soared above the mess, including BAND and LTC, which jumped 57% and 38%, respectively.

Equity markets enjoyed a memorable day as investors, buoyed by Fed Chair Jerome Powell’s dovish remarks at the Brookings Institution’s Hutchins Center on Fiscal and Monetary Policy on Wednesday, sent the tech-heavy Nasdaq up 4.4%, and the S&P 500, which has a strong technology component, and Dow Jones Industrial Average rising 3% and 2.1%, respectively. Brent crude oil, a measure of energy markets, sank 0.2%. 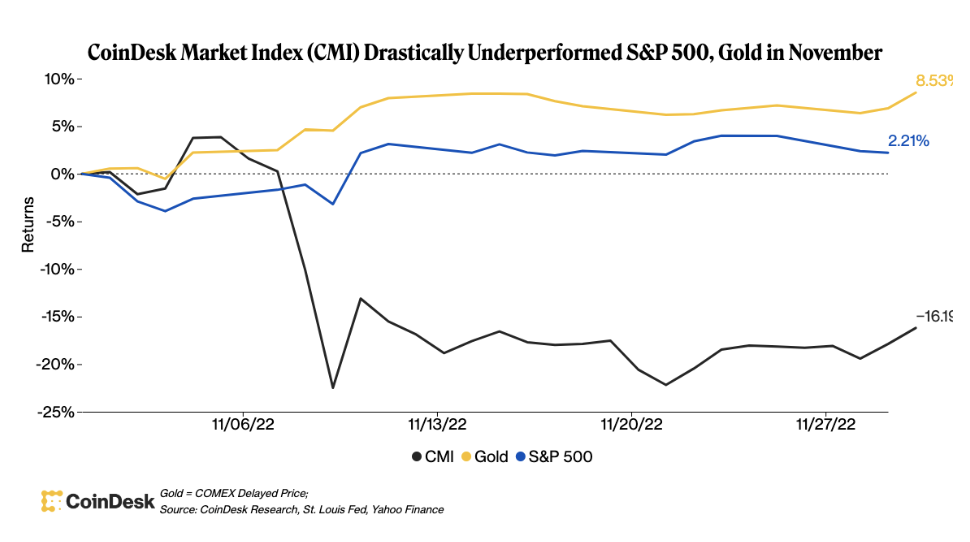