The cryptocurrency industry is eager to comply with the Financial Action Task Force's (FATF) so-called Travel Rule, and appears willing to work with regulators in order to expedite the process, a new survey found.

As per a survey conducted by Notabene, a crypto compliance firm based in New York, most of the crypto industry will be Travel Rule-compliant by Q2 2022. Currently, the report claims that about 70% of respondents are either practicing the rule or planning to complete their compliance in Q1/Q2 2022.

The advent of cryptocurrencies has presented a fresh problem in the effort to combat money laundering and terrorism financing. Since 2014, FATF has been monitoring this area in order to establish norms to address these new dangers. Since then, the FATF has continued to adjust and clarify its positions on Anti-Money Laundering requirements for the crypto sector in order to keep up with its rapid development.

The FATF's Recommendation 16 on wire transfers, also known as the Travel Rule, states that virtual asset service providers (VASPs), financial institutions, and other regulated entities in member countries must give originator and beneficiary details to counterparts in transactions of $1,000 or more.

The survey polled 56 businesses from all over the world responded, 45% of which are based in Asia Pacific base, 30% in Europe, the Middle East and Africa, and 25% in North American. 13% of respondents have a banking license or are a bank; 86% are crypto-native firms.

According to the survey, roughly one-third of firms (31%) completely or partially adhere to the regulation. The report also revealed that 92% of respondents have internal compliance and legal departments, and 78% of these businesses consider these teams able to guarantee the company acts in accordance with external rules and internal controls. 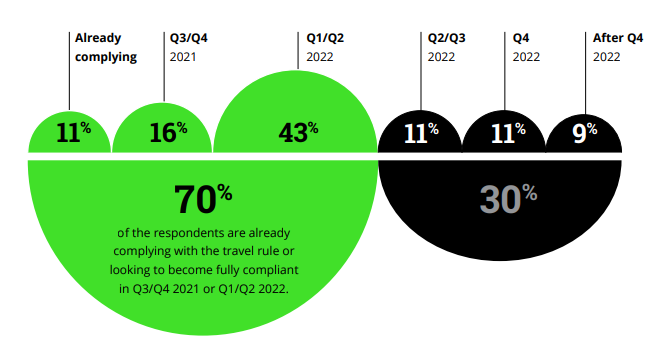 What is your company’s timeline for achieving full compliance with the Travel Rule? Source: Notabene

Half of the respondents, on the other hand, note that enforcement obstacles to Travel Rule compliance include the sunrise period and legal uncertainty over the most relevant aspects of adoption. As per the report, a majority of respondents (46%) were unaware of the protocol they intended to use for compliance.

The FATF published a set of rules, including the Travel Rule, in 2019 to prevent cryptocurrencies from being used for money laundering and terrorist financing. Japan was among the most receptive jurisdictions to the Travel Rule order, along with other Asian nations such as South Korea and Singapore.