Chiliz price has climbed over 70% from the June 9 low to today’s high in the run-up to the European Cup, one of the premier soccer events in the world. The noteworthy rally has captured the attention of the cryptocurrency markets and has been applauded by the CHZ faithful. Still, a trifecta of resistance has cooled the rally and puts forecasts of a continuation on hold.

Euro 2020 tournament set CHZ up for the big kick-off

Chiliz is a tokenized platform that permits sports fans, particularly in soccer, to become team influencers and participate in some decision-making. The tokenization deepens the relationship between the fans and the team that was not possible only a few years ago, taking the fan from just a spectator to an active participant in the teams’ evolution.

To begin, fans need to onboard the Socios.com platform to participate in the clubs’ Fan Token Offering (FTO). The fans must purchase CHZ via a cryptocurrency exchange to acquire Fan Tokens specific to a team. The number of tokens is fixed.

Fans use the tokens to vote in polls regarding the club, such as new jerseys, special events, and gain access to exclusive offering unavailable to anyone else. The more tokens a fan holds, the higher the influencer rating and the opportunity to climb through different reward tiers until they have access to the club’s biggest VIP benefits.

Juventus, an Italian soccer club, was the first team to develop a token offering and has been followed by other soccer giants such as Barcelona, Paris Saint-Germain, Atlético de Madrid and Roma. Hence, the boost in CHZ over the last three days as the teams get ready for the European Cup.

The European Cup is about to open. In the past 24 hours, sports concept tokens have risen sharply, CHZ rose by more than 34.88%, the turnover rate reached 37.27%, and the transaction volume was $646 million, surpassing UNI, BCH, SOL, etc. pic.twitter.com/t1OaWf6bZ0

Since the May 19 low, Chiliz price has been unable to rally above the $0.364 level, preferring to move between the level and the 200-day SMA. Today, CHZ attempted to conquer the distinguished resistance but fell short, constrained by the April declining trend line at $0.351 and intimidated by the declining 50-day SMA at $0.377.

Chiliz price now encounters a trifecta of technical resistance covering the price range of $0.351 to $0.377, and it could prevent the European Cup hype from driving CHZ higher moving forward.

It would take a close above the 50-day SMA at $0.377 to void the cautious outlook for the sports and entertainment token. 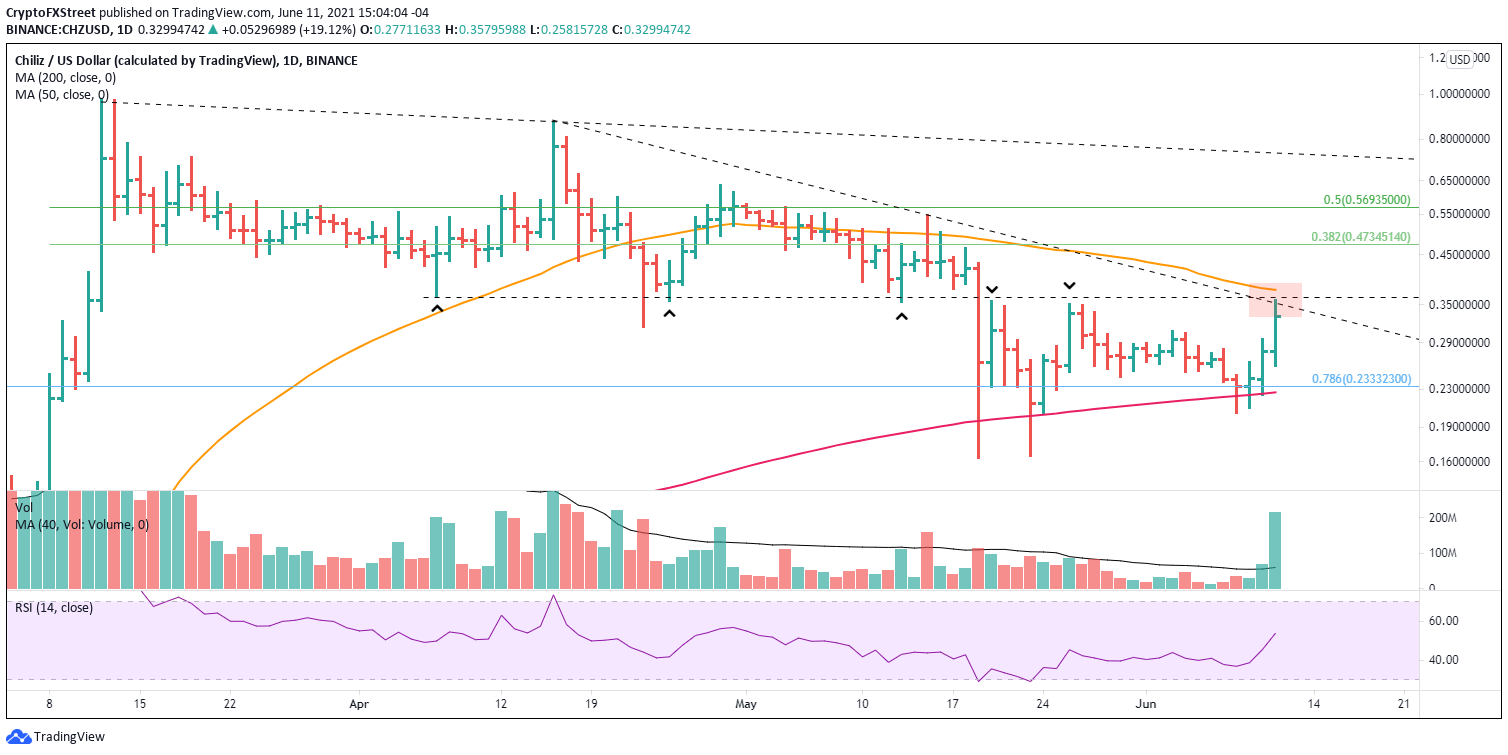 If Chiliz price does close above the 50-day SMA, it will be quickly met with resistance at the 38.2% Fibonacci retracement at $0.473 reinforced with heavy price congestion from mid-May.