The IMF has held a conference on the use of digital assets, where Kristalina Georgieva, the Managing Director of the International Monetary Fund (IMF), is expected to shed some light on the use of Central Bank digital currencies.

FED's Jerome Powell, the head of the Central Bank of Saudi Arabia Ahmed Alkholifey, and the general manager of the Bank of International Settlements Agustín Carstens were among other participants of the discussion.

The cryptocurrency community has been expecting some clarity, with many participants focusing on the comments from the head of the US central bank. In February 2020, Powell already moved the market by mentioning the digital currencies' potential during testimony in front of Congress.

This IMF webcast is highly anticipated in the crypto community, and the chairman's attendance speaks volumes to its importance in traditional finance. Central bank digital currencies (CBDCs) have increasingly been on the minds and lips of those who govern our money for obvious reasons," Mati Greenspan, the founder of market analysis firm Quantum Economics, said via Telegram, ahead of the conference.

However, the participants of the panel mostly repeated the information that has been already known: the FED is in no hurry to launch its digital currency as it wants to access the risks, while other regulators see the benefits and feel the need to counter the surging popularity of private money. Read more details here.

At the time of writing, BTC/USD is changing hands at $11,600. The pioneer digital coin hit the intraday high at $11,647 amid the comments from the global regulators. Despite the upside move, BTC has stayed mostly unchanged from this time on Sunday. 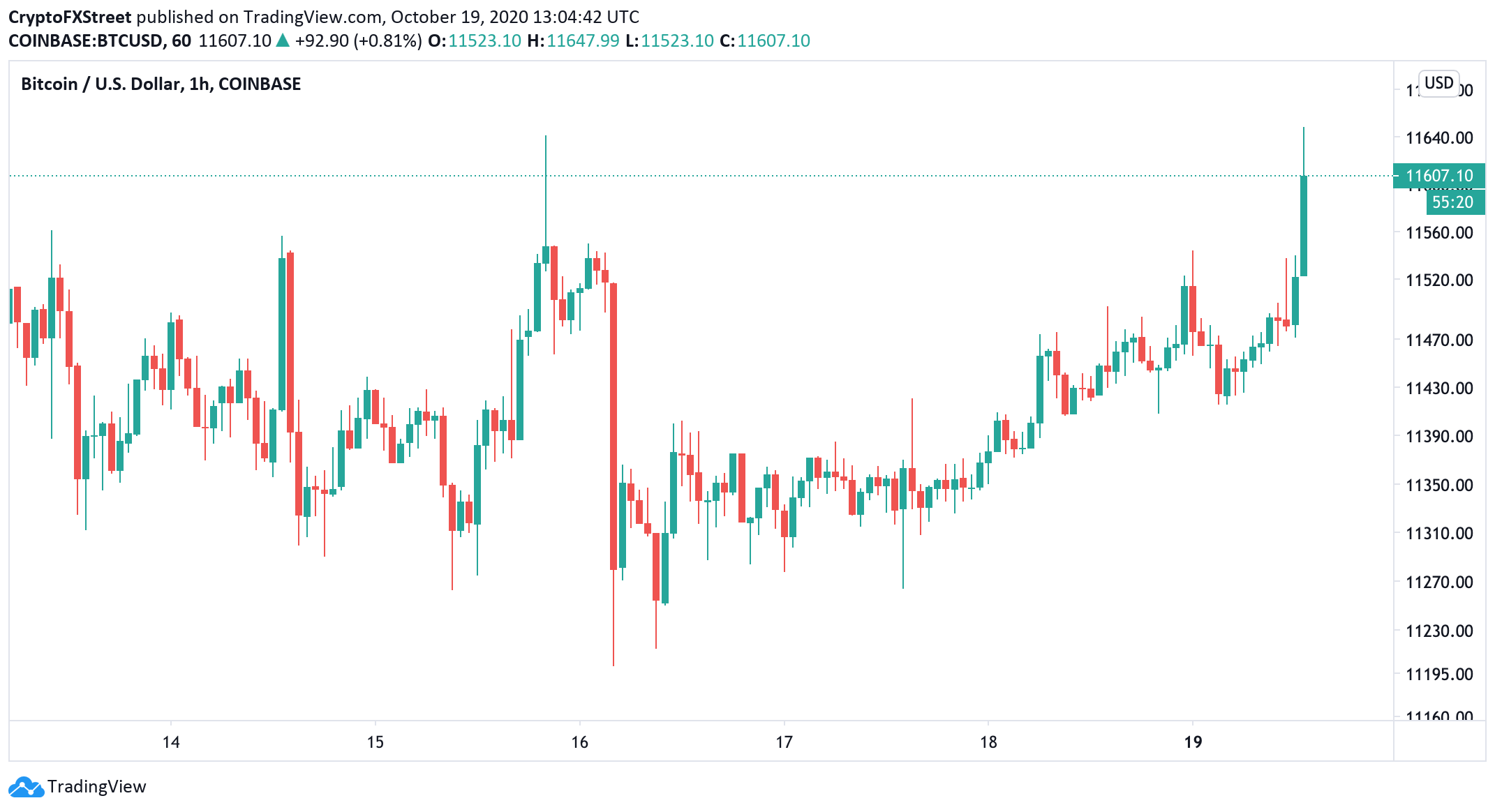 Notably, Ms. Georgieva, the first person from an emerging economy to lead IMF, recently noted the global economy had reached the tipping point that requires decisive actions to fight the crisis and create a more sustainable and equitable world.

We face what I have called a Long Ascent for the global economy: a climb that will be difficult, uneven, uncertain—and prone to setbacks.

Meanwhile, the digital currencies may become part and parcel of the new world order. Recent developments prove that global regulators have been moving away from denial of cryptocurrencies to embrace the concept.

Basically, it means that the regulators are ready to admit that the future of money is digital. The same is confirmed by the poll launched by the IMF ahead of the conference.

As shown above, over 84% of the respondents believe that they will be sending money abroad with digital currency in five years. Obviously, the central banks don't want to miss out.

The part of a bigger picture

Raoul Paul, the Founder, and CEO of Global Macro Investor, shares the view that the introduction of CBDC will trigger a significant overhaul of the global financial system.

If you don't think Central Bank Digital Currencies are coming, you are missing the big and important picture. This is going to be the biggest overhaul of the global financial system since Bretton Woods.

He believes that today's IMF discussion is a part of a bigger shift, initiated by Mark Carney from the Bank of England e year ago. Speaking at a Jackson Hole Symposium 2019, he introduced the idea of creating a network of central bank digital currencies as a basis for a new systemic private payments system.

Now nearly all major central banks are engaged in developing CBDC. According to the recent research published by the Bank of International Settlements (BIS), the essential motivation behind creating the digital asset is n providing a CBDC for payments, enabling broad access to central bank money, and providing resilience.

Implications for the cryptocurrency industry

According to Raoul Paul, the launch of CBDC will change the global financial system and have massive implications on the cryptocurrency industry. He believes that this development will bring the end of the fiat and push the massive cryptocurrency adoption, which will be beneficial for Bitcoin and other decentralized digital assets.

While the regulators and authorities may try to suppress Bitcoin usage once they launch their own digital assets, they will hardly be able to do that.

Yes, there is a chance that CB's will try to suppress #bitcoin in the further future, but much like suppressing gold, it is highly unlikely to work due to the incentive value of owning it.

Considering that fiat will continue devaluating, hard assets like Gold or Bitcoins will become a way to escape the inflationary system. Apart from that, countries, companies, and individuals will be able to move to a hard currency system to attract capital.

With a couple of brief detours higher, bitcoin remained below $19,000 throughout the weekend. The largest cryptocurrency by market capitalization was recently trading at about $18,800, down slightly less than a percentage point over the past 24 hours.