The oldest bank in the United States, BNY Mellon, has been designated to provide asset services for Grayscale’s flagship investment product, its Bitcoin Trust (GBTC).

Digital asset manager Grayscale announced that the firm had designated BNY Mellon to serve as an asset servicing provider once the Bitcoin Trust is converted into an exchange-traded fund (ETF) following approval from the US Securities & Exchange Commission (SEC). The American investment bank will also provide transfer agency and ETF-related services for Grayscale once the conversion comes to fruition.

Grayscale announced in April its commitment to convert its Bitcoin Trust to an ETF once the regulatory environment in the United States becomes more open to the new asset class. The digital asset manager initially applied for a BTC ETF in 2016. No Bitcoin ETFs have been approved so far in the United States.

If the SEC approves and GBTC is converted into an ETF, shareholders will no longer need to endure a six-month lockup and a 2% annual management fee. This could bring the crypto trust more in line with the net asset value of the leading digital asset.

Currently, Grayscale remains the largest cryptocurrency asset management firm with over $20 billion under management by its Bitcoin Trust.

Apart from Grayscale, BNY Mellon has also worked out a deal to become the service provider for First Trust Advisors and SkyBridge Capital’s proposed Bitcoin ETF. Once the SEC approves the ETF, the investment bank would provide similar services, including administration and transfer agency services, as well as basket operations and order taking.

The oldest bank in America also plans to launch digital asset custody services in Ireland, following the institution’s decision to enter into the cryptocurrency space earlier this year.

Bitcoin price has been consolidating and sealed in a descending parallel channel on the daily chart since June 28. BTC continues to trade sideways while the asset scrambles to secure support.

A declining trend line has revealed itself, which has emerged since June 18, connecting the continuous lower highs. The pattern suggests that Bitcoin price could also be expecting lower lows, tagging the lower boundary of the parallel channel. 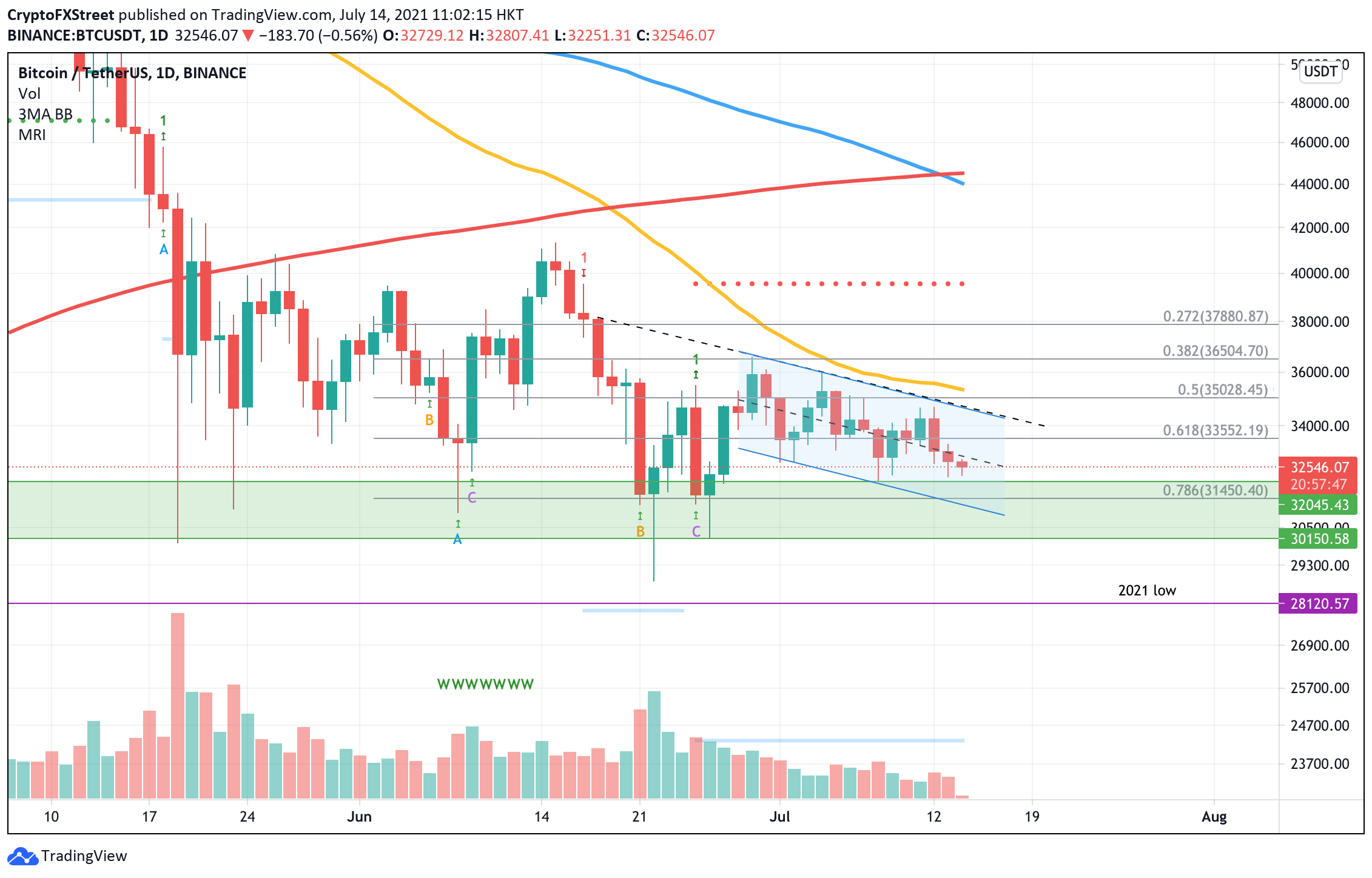 Bitcoin price is expected to retest the crucial demand barrier between $30,150 to $32,045. Investors should also pay attention to the 78.6% Fibonacci retracement level, which sits at $31,450 as a critical line of defense for BTC. Should the asset fail to hold the $30,150 level as support, the leading cryptocurrency could retest the 2021 low at $28,120.

On the flip side, Bitcoin price has many obstacles ahead should BTC bears take control. A major line of resistance appears to be at the upper boundary of the parallel channel at $34,710, nearing the 50% Fibonacci retracement level as well as the 50-day Simple Moving Average.