Bitcoin (BTC) stayed $1,000 lower on May 19 after a grim trading session on Wall Street the day before put pay to further upside. 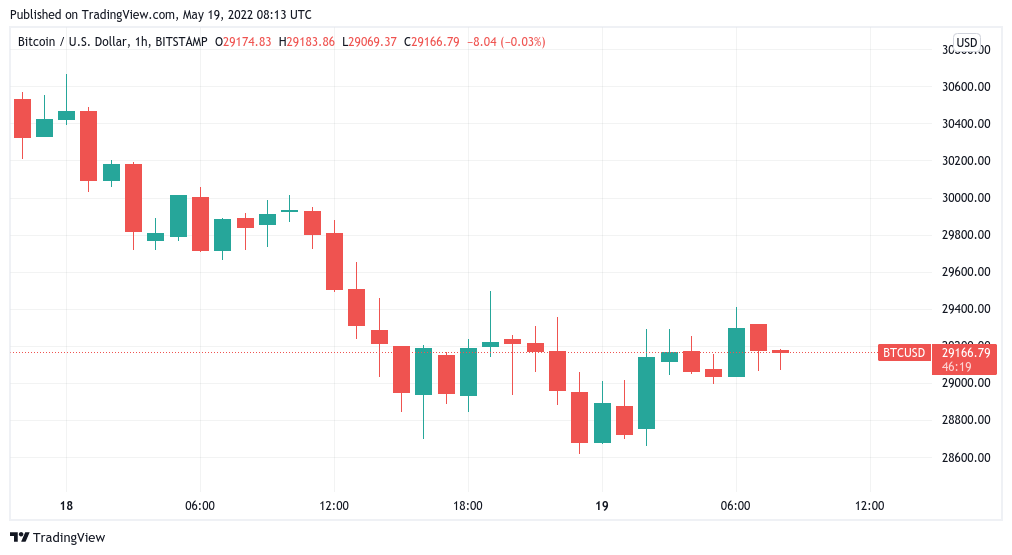 Data from Cointelegraph Markets Pro and TradingView showed BTC/USD circling $29,000 at the time of writing, having bounced at $28,600 on Bitstamp.

The pair had declined in step with United States equities, with the S&P 500 particularly in focus as it set its largest intraday decline since June 2020.

Drama over Tesla, which was removed from the index amid ongoing controversy, fuelled the poor performance.

The firm’s CEO, Elon Musk, publicly rebuked those behind the decision, which appeared tied to adherence to so-called environmental, social and governance (ESG) criteria.

“ESG is a scam. It has been weaponized by phony social justice warriors,” part of a Twitter response read.

Cathie Wood, founder and CEO of investment giant Ark Invest, called the decision to exclude Tesla “ridiculous” and “not worthy of any other response.”

As counter-inflation measures begin to bite, the outlook for risk assets was at best one of “consolidation” in the months ahead, some argued.

Popular trading account CredibleCrypto agreed that Bitcoin was copying behavior exhibited by the S&P 500 during the 2008 Global Financial Crisis.

While bond markets could notionally benefit from financial tightening by central banks worldwide, little faith remained in their investment premise among pro-Bitcoin sources.

“It’s going to get crazier,” he added on the day.

Outside crypto, as Cointelegraph recently reported, markets commentator Holger Zschaepitz frequently refers to the situation as the “biggest bond bubble in 800 years.”

Returning to shorter timeframes for Bitcoin, the prognosis remained focused on potential moves above $30,000 before a deeper correction sets in.

“Probably some momentum towards $29.7K possible. Question whether we can hold $29.3K for continuation, but overall I’m still expecting a HL to be happening on Bitcoin in which we continue towards $32.8K/$34K,” Cointelegraph contributor Michaël van de Poppe told Twitter followers overnight.

Fellow trader Crypto Tony, meanwhile, reiterated his thesis that BTC/USD did not in fact bottom during last week’s tip to $23,800 and that a more substantial “capitulation” was due.

An additional post described the day’s BTC price action so far as being in “no man's land.”