The cryptocurrency market was bearish for the better part of the morning as but at present, the top digital currencies including Bitcoin (BTC), and Ethereum (ETH) are regaining their stability following the ongoing bearish dump the market is leading from the past weekend.

As is prevalent in a bear market, there has been a lot of bull calls, aiming at tilting people from the persistent sell-offs that have pushed BTC below its key support levels notably the $58,000 and $56,000 since the digital currency hit its all-time high. In the early hours of the morning, Bitcoin dipped by as low as $53,555 before paring off the losses.

Ethereum’s growth appears bullish, but the bear influence is still visible as the world’s second-largest digital currency is unrelenting in its push to break new grounds to retest new price levels. While Ethereum’s growth of 1.56% to $1792.17 in the past 24-hours appears low, compared to what the cryptospace is known for, it is commendable owing to the persistent hurdle between the bulls and the bears to control the market direction.

As both BTC and ETH aim at impressing and rewarding their investors, this piece profiles the hidden fundamentals that may either help uplift the bull actions or give more impetus to the bears in the market.

The current sell-off stirring the drop in the price of Bitcoin is the effect of newer BTC addresses giving away their holdings while older HODLers are helping to keep the fort.

This claim was revealed by on-chain analytics provider, Glassnode who noted that more than 95% of Bitcoin spent outputs are younger than 3 months old, with the meager 5% accounting for BTC in older accounts featuring in on-chain transactions today.

The old accounts as noted by Glassnode as those whose Bitcoin holdings have been sitting in a wallet for more than 155 days while the new accounts are those whose BTC assets were acquired less than 155 days ago. The latter category is more sensitive to price movements and may be responsible for the sell-off in Bitcoin price while the former category is the ones helping to maintain the balance.

Technical indicators from the daily BTC-USD chart is showing that the override of the short-term sellers may take much longer to happen. 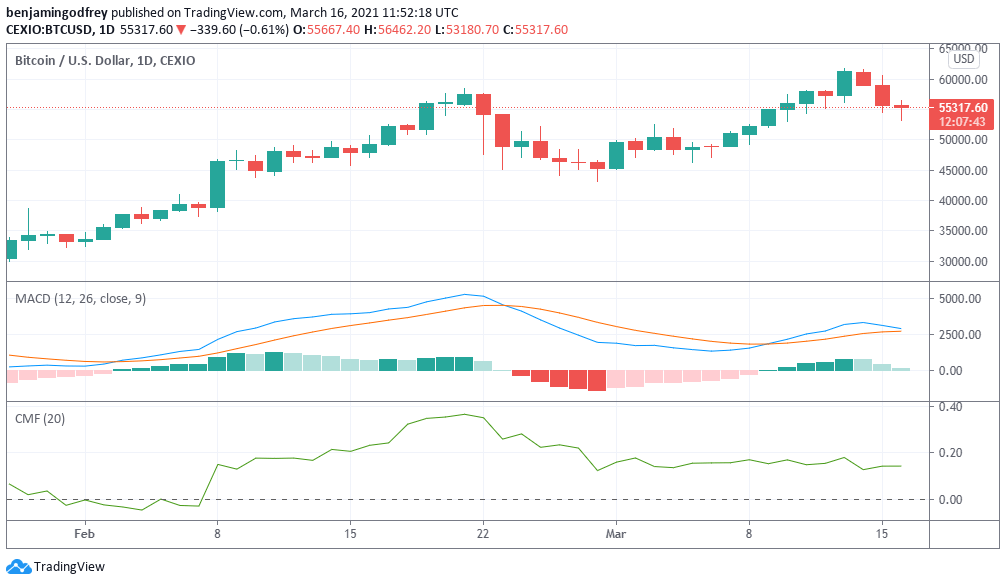 The blue MACD indicator is drawing near to cross below the signal line, a move which if trigger can stir a more spiral plunge of Bitcoin to lows experienced back in the early days of the month. However, seeing the imminent rollout of the stimulus cheques, the free fall is the technicals are right will not drop below the $50,000 support level before the end of the week.

Based on this, Bitcoin has a bearish price target of $52,000 and a plausible resurgence back to retest the resistance level at $60,000.

Ethereum has impressed with its current price move, showing strong resistance to the influence of the market bears, following the attempt to drag BTC down. While Ethereum’s growth is not reflecting on the 4-hour chart with USD as the reference, the battle for control is currently in the hands of the bulls. 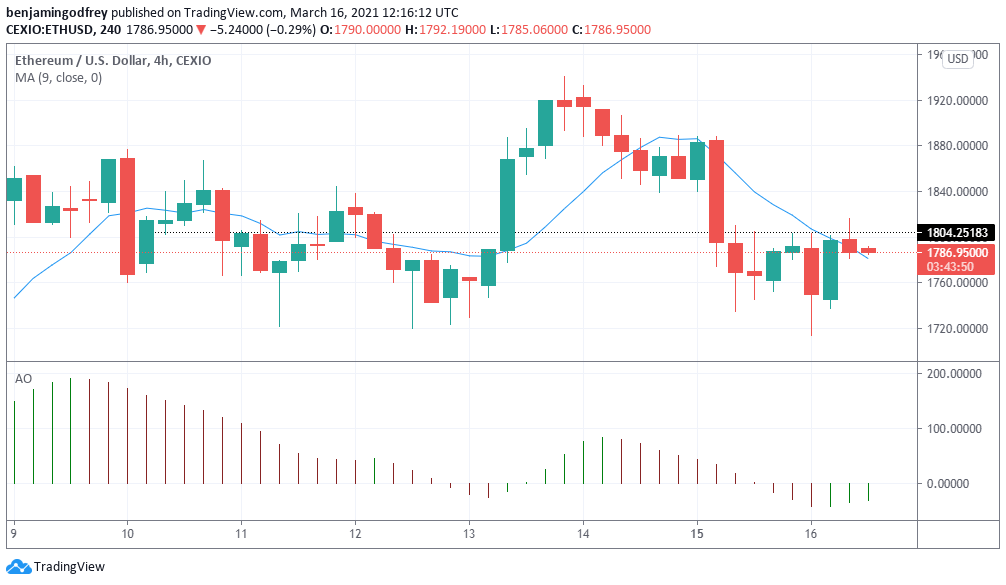 With the Awesome Oscillator and the Moving Average bearish, Ethereum’s growth may still not have any effect on the coin’s long-term ambition to retest the last high of $1,940 attained on March 13th.

Per the resistance of the bulls to a market push-over, ETH may withstand a drop to its last major support level of $1,700 while maintaining the ambition to reclaim the $1,800 resistant zone in the coming days.