Bitcoin has risen over 40% this month, reaching a new record price of $66,879 on expectations that the recently listed ProShares exchange-traded fund (ETF) tied to the cryptocurrency’s futures would bring more mainstream money into the market.

Such a steep ascent often has investors assessing whether the party is coming to a close, especially when popular technical indicators like the relative strength index (RSI) signal overbought conditions, as with bitcoin.

However, blockchain metrics like the MVRV Z-score and a lesser-known chart-based indicator, Mayer Multiple, suggest the bull run has plenty of steam left. 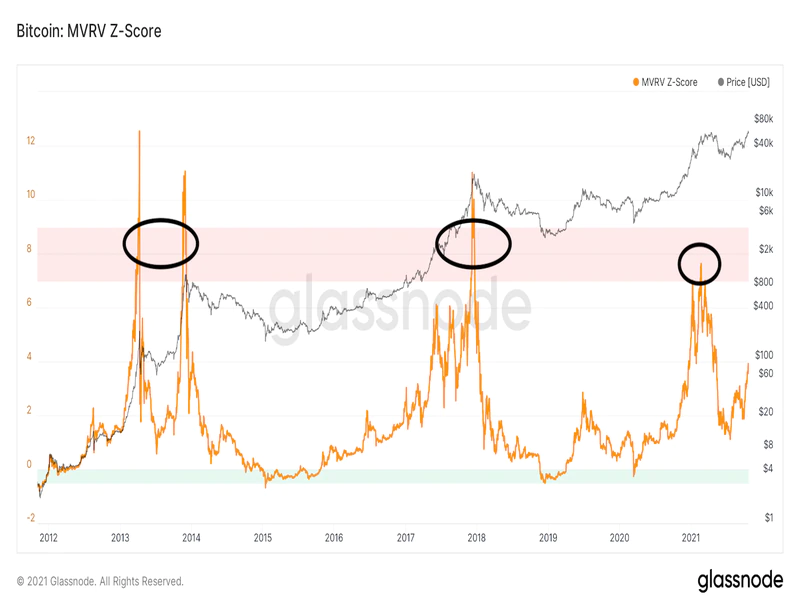 The market value-to-realized value (MVRV) Z-score that measures the deviation of market value from realized value and is used to assess undervalued and overvalued conditions, has doubled to 3.91 this month. However, the value is nowhere close to the red zone above 5.00 that has historically marked the final leg of the bull market.

The market value represents the total network value of the cryptocurrency and is calculated by multiplying the total circulating supply by the last traded price. Meanwhile, the realized value is calculated by valuing each coin at the price it was last moved.

Although bitcoin market valuations may not be cheap, they do not appear to be overstretched either, with there being scope for an extension of the price rally.

“When market value is significantly higher than realized value, it has historically indicated a market top (red zone), while the opposite has indicated market bottoms (green zone),” blockchain analytics firm Glassnode said in the MVRV Z-score explainer.

The Mayer Multiple, which measures the spread between bitcoin’s price and the 200-day moving average (MA), also shows the bull market is still far from peaking. While the metric has risen to a five-month high of 1.39, it is well below the 2.4 thresholds, above which previous bull markets peaked. 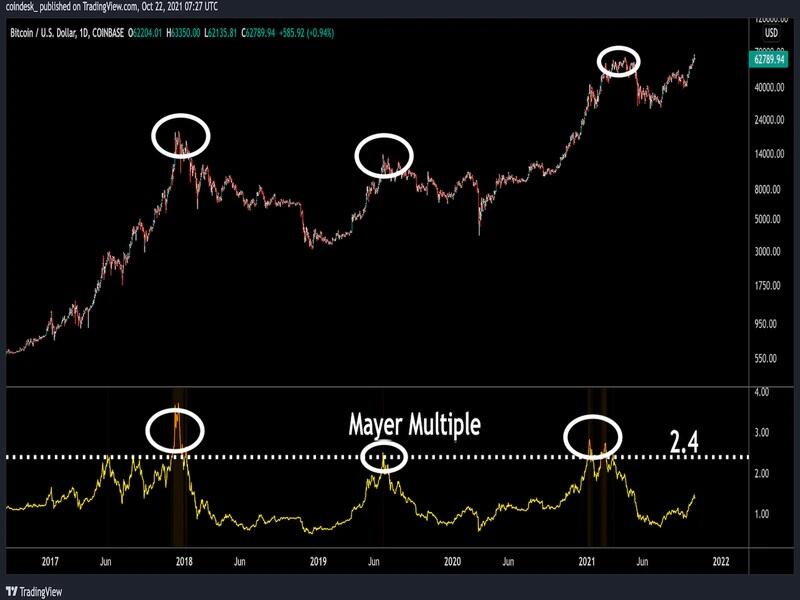 Both indicators back up analysts’ expectations of a continued price rally toward $100,000 in the coming months. That said, it may not be a smooth ride, and the cryptocurrency may see price pullbacks depending on the degree of leverage in the market.

The cryptocurrency remains vulnerable to macro risks and potential risk-off in traditional markets.

According to Reuters, there is a growing view in the market that the U.S. Federal Reserve may soon feel compelled to scale back stimulus more aggressively to contain inflation. “U.S. traders are now pricing a full rate hike into the Fed’s September policy meeting next year. But by that time, New Zealand’s central bank would have hiked five times, Canada’s three times and England’s four times,” Bloomberg report said.