The Avalanche Foundation has announced a new investment round from a venture capital group led by Polychain Capital and Three Arrows Capital. The $230 million raised will support liquidity on the network’s decentralized finance (DeFi) ecosystem. Kyber Network is also launching its automated market maker (AMM) on the Avalanche blockchain as part of its $180 million incentive program.

The Avalanche Foundation stated that it would use the $230 million fund to support and accelerate the growth of DeFi and enterprise applications, along with other use cases on its public blockchain.

While the funding round was led by PolyChain Capital and Three Arrows Capital, CMS Holdings and Dragonfly Capital, among others, also took part.

Avalanche continues to aim for value creation for DeFi users and developers. Avalanche founder Emin Gün Sirer stated that there is more potential yet to come at the “intersection of institutional and decentralized finance on Avalanche.”

Kyber Network is also launching its AMM on Avalanche as part of the base layer’s $180 billion incentive program. The network has already launched its dynamic market maker on protocols including Ethereum, Polygon and Binance Smart Chain.

The move from Kyber Network comes after the $230 million investment into Avalanche’s DeFi ecosystem. According to the blockchain’s founder, enhancing liquidity opportunities continues to be a key factor in growing the DeFi ecosystem as it aims to welcome new participants into the community in the future.

Avalanche’s native cryptocurrency, AVAX has reached a new all-time high amid the new announcements concerning the developments on the network.

AVAX price has reached its optimistic target given by the parallel channel chart pattern on the 4-hour chart. Surging above the September 12 high at $64.94 was a significant move for Avalanche, leading to the recent all-time high at $68.83.

The smart contract token has formed a parallel channel since late August, signaling that the coin could endure a period of consolidation. AVAX price finally broke out of the sideways trend on September 10, opening up the possibility of a 40% move.

AVAX price has sliced above the target of reaching the topside trend line of the upper parallel channel, which currently acts as the first line of defense for Avalanche. 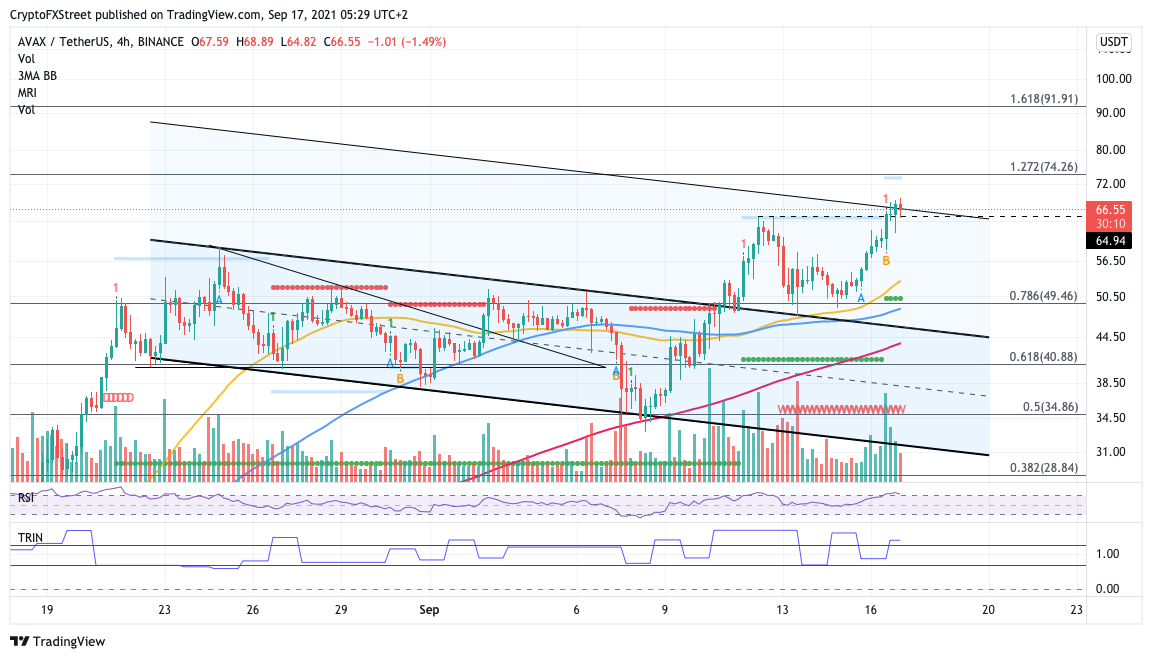 The next target for AVAX price appears to be at the 127.2% Fibonacci retracement level at $74.26, should the buyers continue to step in and incentivize Avalanche to climb higher. The Momentum Reversal Indicator (MRI) also notes that the breakout line sits around this level, suggesting that if the bulls are able to slice above this area, the altcoin could head even higher toward the 161.8% Fibonacci retracement level at $91.91.

However, should the bulls’ aim fall short, AVAX price will discover support at the September 12 high at $64.94, then at the 50 four-hour Simple Moving Average (SMA) at $53.17. Further lines of defense will emerge at the MRI’s support line, which sits near the 78.6% Fibonacci retracement level at $49.46 before slipping further toward the 100 four-hour SMA at $48.73.