With the first cryptocurrency trading platform, BitcoinMarket.com, going live in March 2010, crypto has been traded on exchanges for almost 10 years. Over this period of time, we have grown accustomed to the situation where Bitcoin (BTC) and altcoins, cryptocurrencies other than Bitcoin, were linked to each other. Especially Bitcoin and Ethereum (ETH), its nearest competitor.

But this trend is passing. Bitcoin is growing its market dominance, while altcoins are performing strongly on the downside. Does it mean that altcoins are in crisis? What is happening in the market and do altcoins have the future?

According to the CoinMetrics’ report, over July, almost all assets have experienced a steep correction in price with some major assets down 40%.

The report also says, Bitcoin has remained nearly unchanged with decline of only 2% in the same volatile period.

Take a look at the following data to see how strongly all of the altcoins have been underperforming over June and July, 2019. 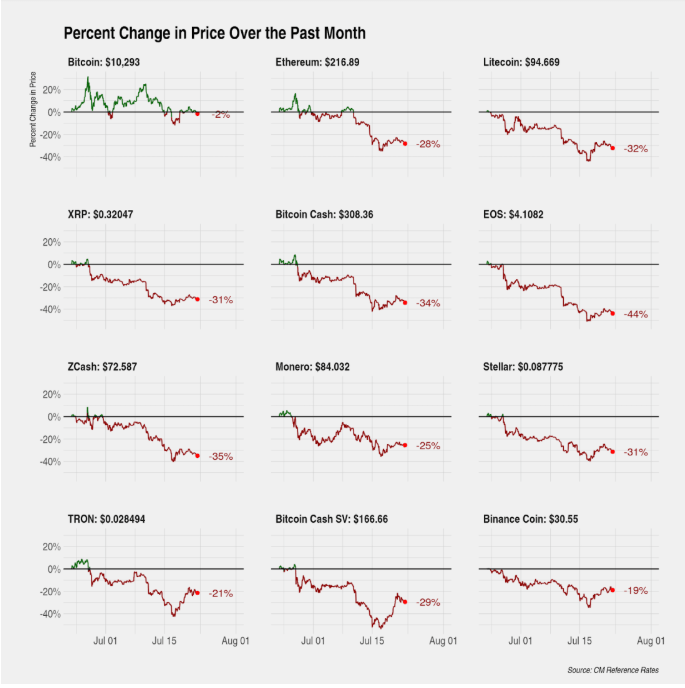 Credit for this image: CoinMetrics

The research on the situation conducted by TradeSanta, software for automating trading on exchanges, demonstrated several facts.

First, Bitcoin dominance in the market is a result of its longevity and institutional investability.

And second, in private conversations, the experts agreed that altcoins still had a chance to get back in the game.

Bitcoin has been around longer than altcoins

One of the reasons why Bitcoin is performing so well is that it is the pioneer of the market. “85% of bitcoin has been mined, so the current mining difficulty has increased immensely since the beginning of Bitcoin,“ AltSignals experts explained to us.

They added, it increasingly becomes a currency with greater demand and less supply, which in almost any market drives the price to new levels.

Technophiles and geeks bought into Bitcoin as early as in 2010. The first altcoin, Namecoin, back then was still baking in the oven. Three years later, when altcoins only started to pop up, the U.S. Treasury had already classified Bitcoin as a virtual currency.

Nowadays, in many cases, Satoshi’s coin remains the main coin you have to buy to operate with altcoins on exchanges.

’’Bitcoin is growing due to its popularity and its impact on the overall crypto market,’’ Sebastian Seliga, head of analysis and trading at BitBay, commented, ’’It’s the most known cryptocurrency and it has been here for years now.’’

That is to say, it’s interesting how, due to its first-mover advantage, quite an old technology has overpowered a constantly evolving ecosystem. Bitcoin was the first market entrant and gained a reputational leadership over the past 10 years, despite the fact that there are more technologically advanced coins out there.

“Bitcoin is the king, it leads the market,’’ Joel Kovshoff, Athena Enterprise Software CEO, said to TradeSanta, “Altcoins might follow and I don't expect them to be any different from traditional businesses with 95% failing in the next 3-5 years.”

Bitcoin grows due to its institutional investability. In the summer of 2019, there is no actual retail coming into the market, yet, we can see that players buying into Bitcoin right now are big-time players.

“The reason why Bitcoin will continue to increase in value is because institutions have been buying it over-the-counter to sell it later to the retail market,” Kovshoff commented, “Blackrock, Greystone, Bakkt, ErisX, TD- Ameritrade have all Invested large sums of money, and continue to do so even now.”

The expert also emphasized, not only are institutional investors interested in Bitcoin, they have been buying it since $3000-$4000.

“Why are they buying it? Because it was fully capitulated,” Kovshoff said, “Now these very institutions will sell Bitcoin and other cryptocurrencies to regular retail investors. They will act as an on-ramp for new crypto investors by developing easier solutions to penetrate the market. Soon it will be as easy as a few clicks of a button and they will be able to buy Bitcoin in the same way they buy stocks, derivatives and ETFs.”

The expert added, that’s a really smart move, as big players now can manage Bitcoin for other people and have a lot of control over the market. “Unfortunately, this was not Satoshi’s vision, but it will likely help adoption as many people do not want to learn how to be their own bank.”

That is to say, investing in Bitcoin is no longer just a hype everybody wants to join. Satoshi’s coin slowly turns into a self-standing asset for the long-term investment.

The summer of 2019 gives us a good chance to assess which players really drive market prices. And this is not retail.

In May 2019, Fidelity Investments and Greenwich Associates have released a report to demonstrate institutional investment in digital assets are likely to increase over the next five years.

Half of them view digital assets as having a place in their investment portfolios. About 22% of institutional investors already have some exposure to digital assets.

The question is, if the institutions are that much interested in crypto, why are altcoins in crisis?

Not so long ago, U.S. Treasury Secretary Steven Mnuchin warned that the Trump administration would pursue “very, very strong” enforcement of existing financial regulations to stop criminals from using crypto.

It’s also widely covered how Facebook’s Libra has been fighting off the officials, trying to pave its way to even a place where they had a permission to launch.

Seems like, while Bitcoin keeps on growing and is slowly separating itself from the whole crypto market, altcoins take the regulatory heat.

Will we witness a new altcoin season anytime soon?

Experts interviewed by TradeSanta agreed that the altcoin season was about to come but not now.

Altsignals analysts consider this as a possibility near January 2020. “At the moment, there is speculation about a possible financial crisis in the stock markets,” they explained, “which could attract large Forex investors to the Bitcoin market, as a guarantee to continue increasing their capital.”

Experts added this situation could bring Bitcoin to its new highs and altcoins to their new lows in 2019, which moves the altcoin season closer to the beginning of 2020.

Since 2008, when Satoshi delivered Bitcoin, the asset has experienced quite a long period of silence, before the spike in 2017. For altcoins to recover now, they need to be dead for people the way Bitcoin was dead. Once the full cycle of capitulation happens, the projects survived will be able to learn from their mistakes and get back into the game.

“The cycle of capitulation will happen, and it will happen probably in the next three-four months,“ Kovshoff of Athena Education commented, “I see some of the Altcoins with real use cases and revenue generation models making a comeback. Most will find it very difficult and never make it back to their all time highs.”

In general, all the experts agreed with the fact that any altcoin has got the future if it has a use case.

“Generally, the altcoin market will be present in the years to come and surely it will expand, but it will be much more related to the chosen and specialized niche that the particular altcoin is representing than to the overall cryptocurrency market,“ Seliga of BitBay predicted.

If the company is able to give value to its token, and not the other way around when the token gives the company value, the altcoin project has a real chance to succeed.

But while altcoin projects wrap their heads around this fact and learn from their mistakes, their assets continue in downtrend in their coin/BTC pairs.

Is that a reason to get pessimistic? Not for traders we talked to!

They are patiently waiting now for the Bitcoin bubble to blow and diversify investments among the most interesting altcoins.

Bears take over and draw a bloody moon

Cryptographer and computer scientist Nick Szabo, has presented in his Twitter account a study on the "risk-benefit" ratio of different assets. The study used a Sharpe Ratio over four years Hodl period.

Ripple's CEO sees an era of IPO in cryptocurrency industry

Ripple's XRP, the third-largest digital asset with the current market value of $9.4 billion has lost over 5% in recent 24 hours and hit the low of $0.2136 on Friday. XRP/USD is moving within a clear bearish trend amid expanding volatility.

The Crypto Sector in selloff mode searches a support zone

Most of the cryptocurrency sector accelerated the losses after breaking the neckline of support that was holding their prices. The selling pressure was in almost all digital assets.

The cryptocurrency market started the downside correction after a strong rally initiated by risk reversal play at the beginning of January and reinforced by various altcoin pumps...