The Japanese yen has been set ablaze, losing 18% of its value against the US dollar this year alone. This stunning downfall has been orchestrated by the Bank of Japan, which refuses to tighten monetary policy. It’s difficult to say exactly where the bottom is, but several forces suggest the yen’s downtrend is approaching its conclusion, one way or another.

This year has been a horror show for the Japanese yen. The main culprit behind the yen’s troubles has been the Bank of Japan, which is now the only major central bank that is not even thinking about raising interest rates. Instead, it continues to defend its yield curve control strategy, which keeps 10-year Japanese bond yields pegged around 0%.

With yields in the rest of the world going berserk as foreign central banks make a stand against raging inflation, interest rate differentials have widened against the yen since the BoJ is keeping Japanese yields pinned on the floor. Capital is essentially flowing out of Japan, searching for higher returns elsewhere. 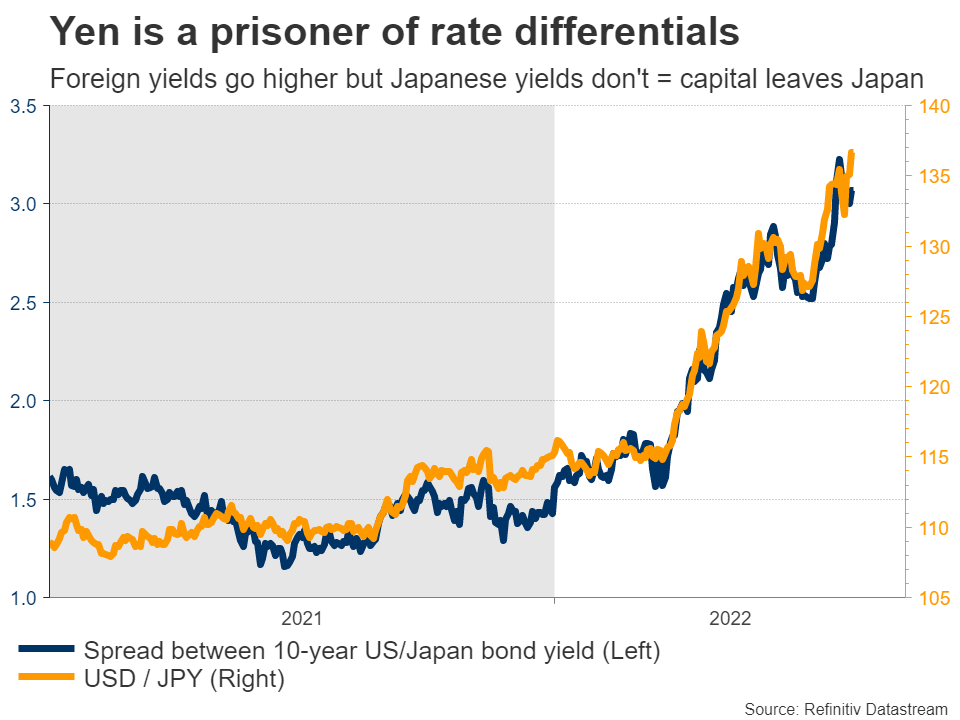 Another problem has been the global power crunch. Japan imports most of its energy from abroad, so the nation’s chronic trade surplus has turned into a trade deficit lately as oil prices went through the roof. And tourists are still unable to visit the island, suppressing demand for the yen even further.

Why is BoJ doing this?

The prime reason the BoJ refuses to even consider normalization is simple - there isn’t much inflation to fight. Both headline and core inflation crossed above 2% recently but most of that comes down to the impact of supply shocks that usually fade away. Other underlying measures that the BoJ watches closely show inflation stuck under 1%, despite the inflationary supernova abroad. 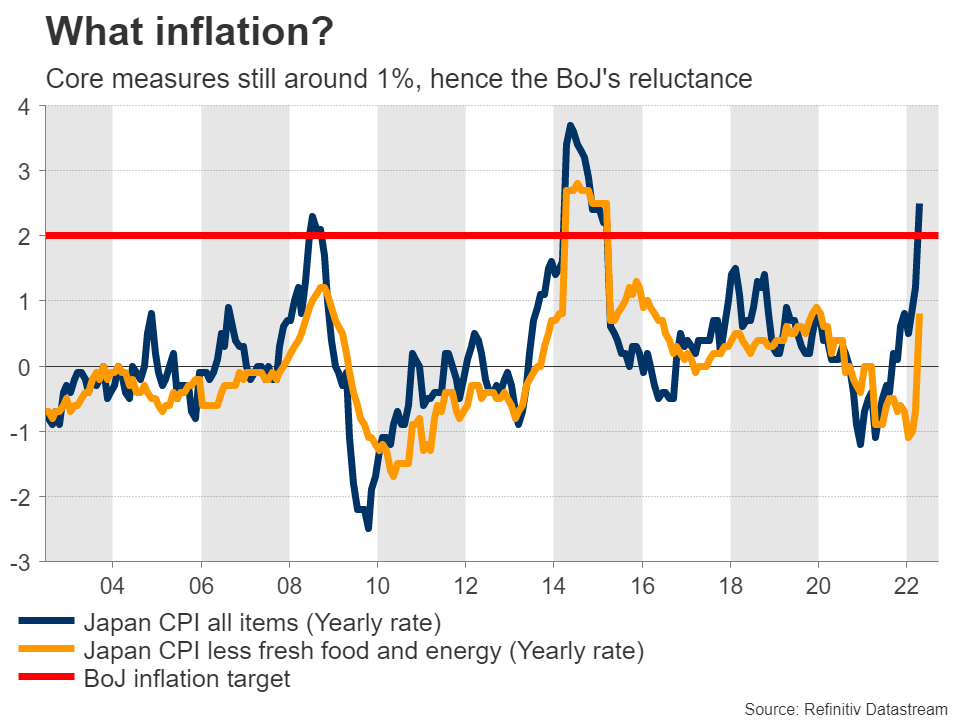 Wage growth is similarly muted and inflation expectations remain far below the BoJ's 2% target, so there is no danger of a wage-price spiral that keeps feeding inflationary pressures. This means the central bank can afford to stay patient, something that even Prime Minister Kishida admitted this week.

By keeping its foot heavy on the gas, the BoJ is trying to import enough inflation from abroad to break the deflationary mindset that’s been embedded in Japanese culture for decades now and kickstart the economy. It’s all about shocking consumers into expecting higher inflation. 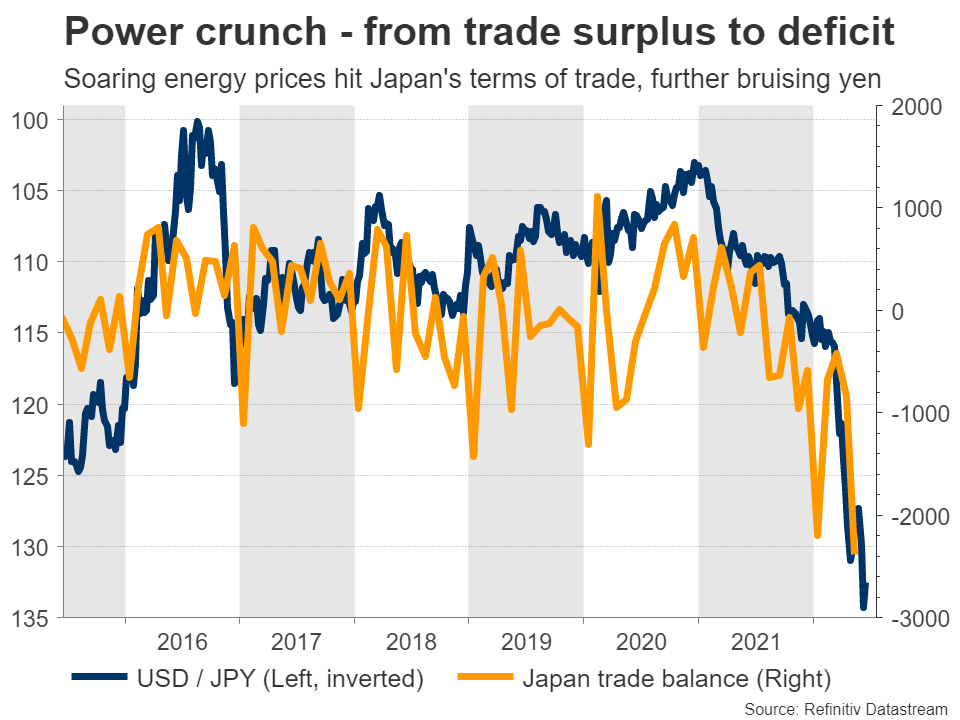 Ultimately this is a losing battle. The central bank cannot fight demographics in a rapidly aging society. Demand is destined to fall over time as the population shrinks. However, the BoJ is committed to fighting. It has taken its foot off the accelerator prematurely in the past, and it won’t make the same mistake twice.

Of course, everything has limits. The weak yen has turned into a political issue in Japan, with the government facing public outrage about the rising cost of living. As such, there is tremendous pressure on Tokyo to intervene in the FX market to stop the yen’s bleeding.

Government officials have resisted so far because that would contradict the BoJ’s efforts to revive inflation. It would also be a costly affair and there is no guarantee it would work, as neither the Europeans nor the Americans would help. But if the yen continues to depreciate so rapidly, Tokyo might still pull the trigger - even if only to flush out speculators. 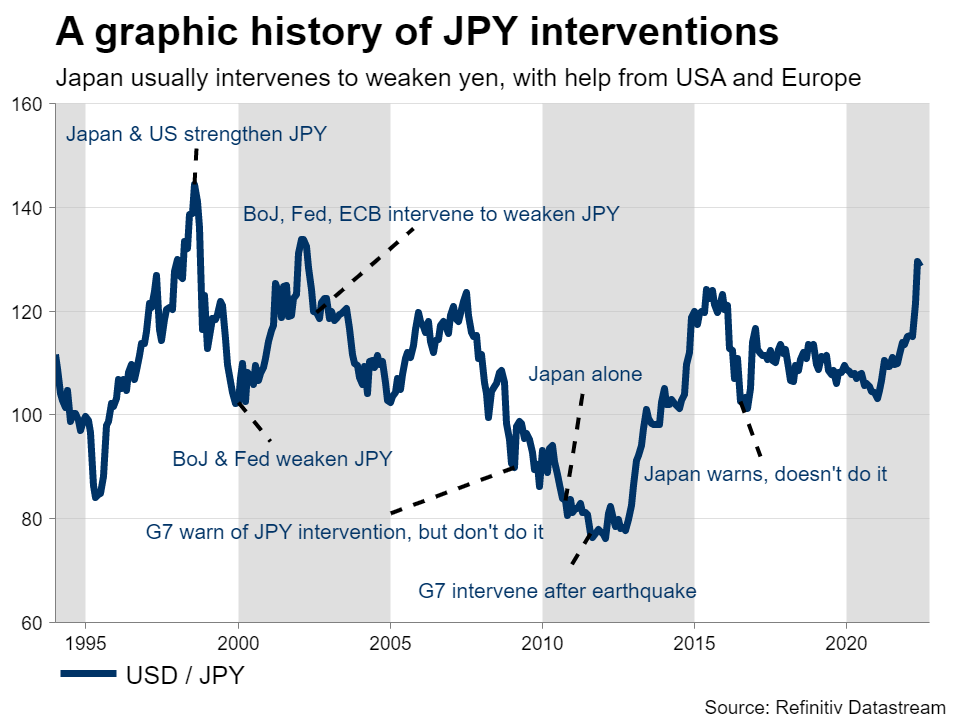 In other words, there is a floor for the yen somewhere. The question is where exactly this pain threshold is. Some strategists point to the 140 barrier in dollar/yen, while others suggest it might be closer to the 145 region.

Blood in the water

In order to keep its yield curve control strategy in place, the BoJ is forced to take heavier and heavier action as other central banks like the Fed continue to raise interest rates. Hence, the selling pressure on the yen increases the higher foreign rates go.

That said, easing monetary policy while every other central bank tightens is similar to trying to hold back a river. You cannot do it forever. At best, BoJ Governor Kuroda has a few more months to try his inflation experiment.

Traders can smell blood in the water. Bets that Japanese yields will breach the BoJ’s 0.25% ceiling have intensified lately, something visible in overnight index swaps. Implied volatility in the yen is also quite high, confirming that big players are hedging against powerful FX moves. 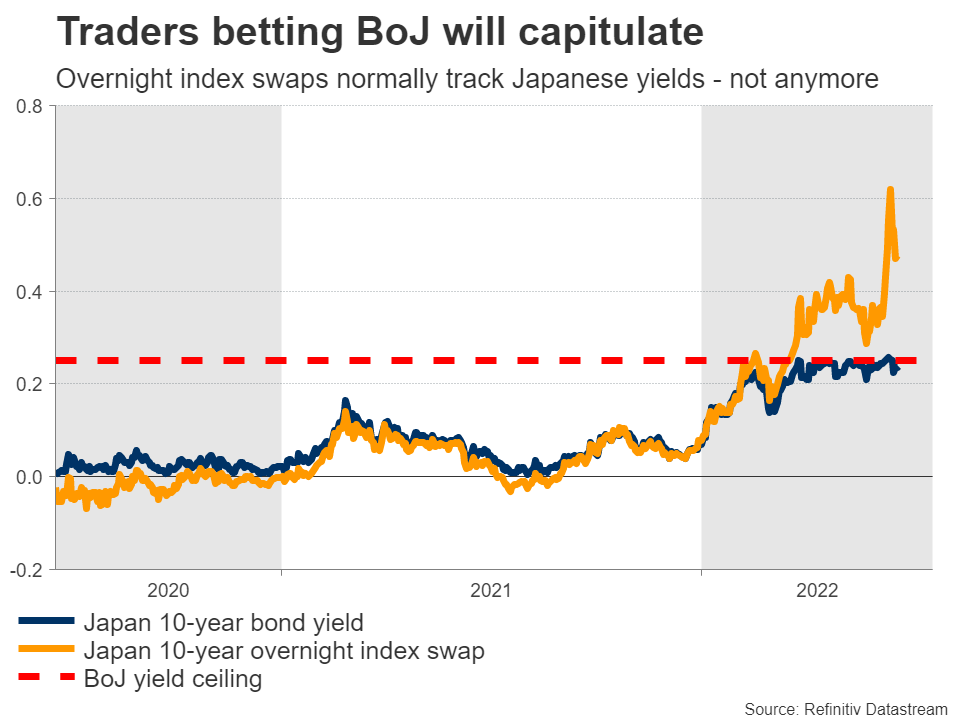 Overall, there is a sense that the BoJ will be forced to capitulate and raise this ceiling or scrap yield control entirely - perhaps at one of its upcoming meetings in July or September. But don’t expect any warnings in advance. That’s not how this game works. The decision needs to be a ‘surprise’, otherwise speculative traders will attack Japanese bond markets.

Instead, the signal will be inflation numbers, the next batch of which will be released this Friday.

One way or another

All told, there’s probably some more pain left for the yen, although there is also light at the end of the tunnel. This seems to be the last phase of this terrifying downtrend. Either the BoJ will pivot and allow the yen to find a bottom, or the currency depreciation will turn into a crash and become unbearable politically. 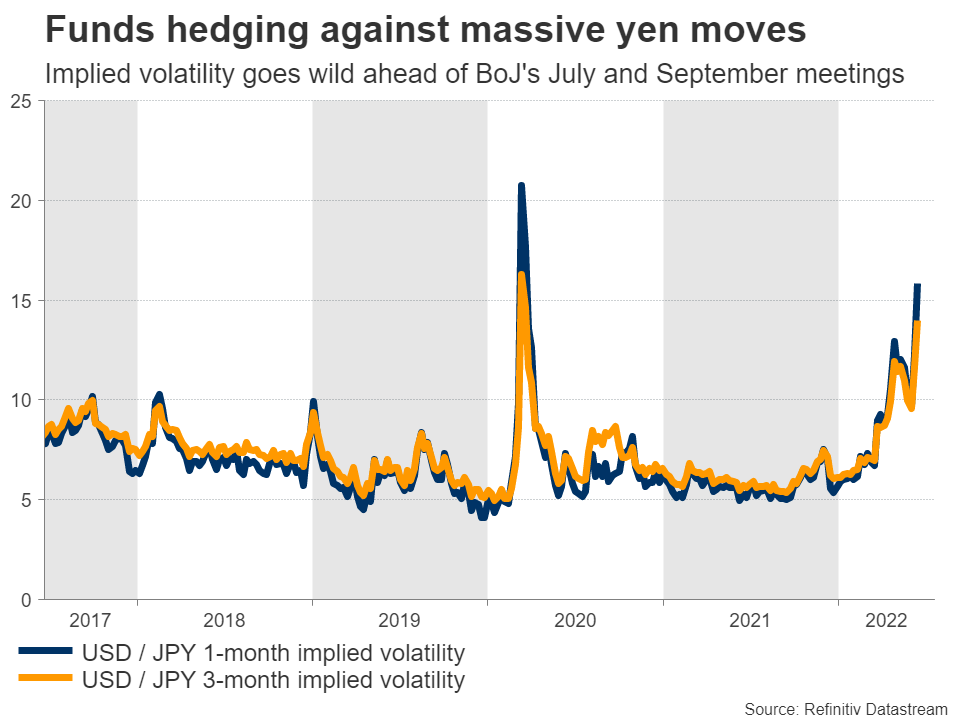 There are other forces that could rescue the yen too. If markets get the sense that inflation abroad has peaked or that a global recession is imminent, bets for rate increases by the Fed could be dialed back. In turn, that would allow interest rate differentials to compress again and give the yen some breathing room.

We haven’t quite hit rock bottom yet, but we are rapidly approaching that stage.