Spot gold edged higher on Friday and probed above $1900 barrier, inflated by weaker dollar after signals that rising US inflation, which made a biggest annual increase almost 13 years, was insufficient to push Fed to start changing its stance over ultra-loose monetary policy.

The US central bank expected to signal a strategy of a gradual reduction of its massive bond-buying program probably in August or September policy meeting, but is unlikely to act until early 2022 that leaves a plenty of space for the yellow metal to rise.

Initial support lays at $1889 (rising 20DMA/session low), with near-term bulls expected to remain in play while the price action holds above the lower wedge pattern boundary ($1874). 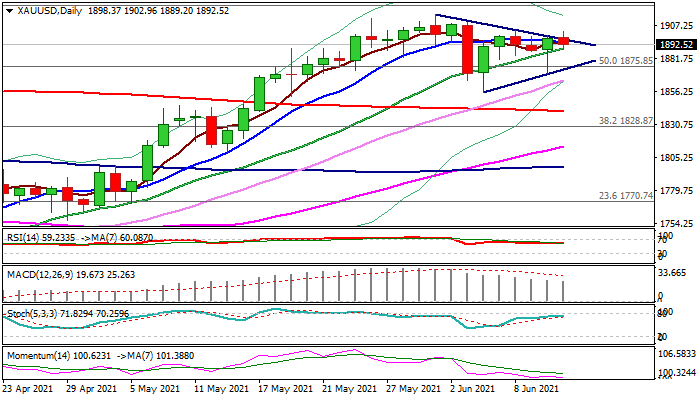 Interested in XAU/USD technicals? Check out the key levels

EUR/USD has turned south, changing hands closer to 1.2150 as the dollar recovers alongside Treasury yields. US Consumer Sentiment is awaited. Earlier, the euro shrugged off the ECB's dovish, no-tapering stance.