On Monday, the Fed introduced QE-infinity. What does it imply for the US economy and the gold market?

On Monday, the Fed pulled out an even larger bazooka than it did previously. Or, forget about the bazooka. The US central bank has gone nuclear! Indeed, the US central bank announced extensive new measures to support the economy. On March 15, the FOMC had announced it would purchase at least $500 billion of Treasury securities and at least $200 billion of mortgage-backed securities. On Monday, the Fed expanded its asset purchasing program by including purchases of agency commercial mortgage-backed securities in its agency mortgage-backed security purchases. In addition, the FOMC introduced unlimited quantitative easing. Yes, unlimited! The QE-infinity is back!

What is really frightening is that it took just eight days for the Federal Reserve to go from QE of $700 billion to unlimited buying of assets to fight the coronacrisis. The QE3 which followed the Great Recession, was announced in September 2012 – that is four years after the collapse of the Lehman Brothers. Now, the Fed went totally berserk just within one week from the QE1! It means two things. First, the previous measures turned out to be ineffective. Told ya so! You cannot stop the health crisis with monetary policy. Second, the pace and scale of the current crisis is shockingly fast. From March 15 to March 20, the Fed had already spent $340 billion in Treasury and mortgage-backed securities, half of the planned program! It shows how fragile the current monetary system based on the fractional reserve banking and fiat currencies is. It also means the current economic shock is probably the most disruptive crisis since not only the Great Recession but the Great Depression and the Second World War.

And, we are afraid that the worst is yet ahead of the United States. More state lockdowns have been announced, while the numbers of infected Americans have been rising exponentially. Actually, as one can see in the chart below, the epidemiological curve in the US is very steep, even steeper than in Italy. It means that the real health system crisis and the biggest death toll is yet to come.

Chart 1: Trajectory of total confirmed cases since the 100th case in the United States and other countries 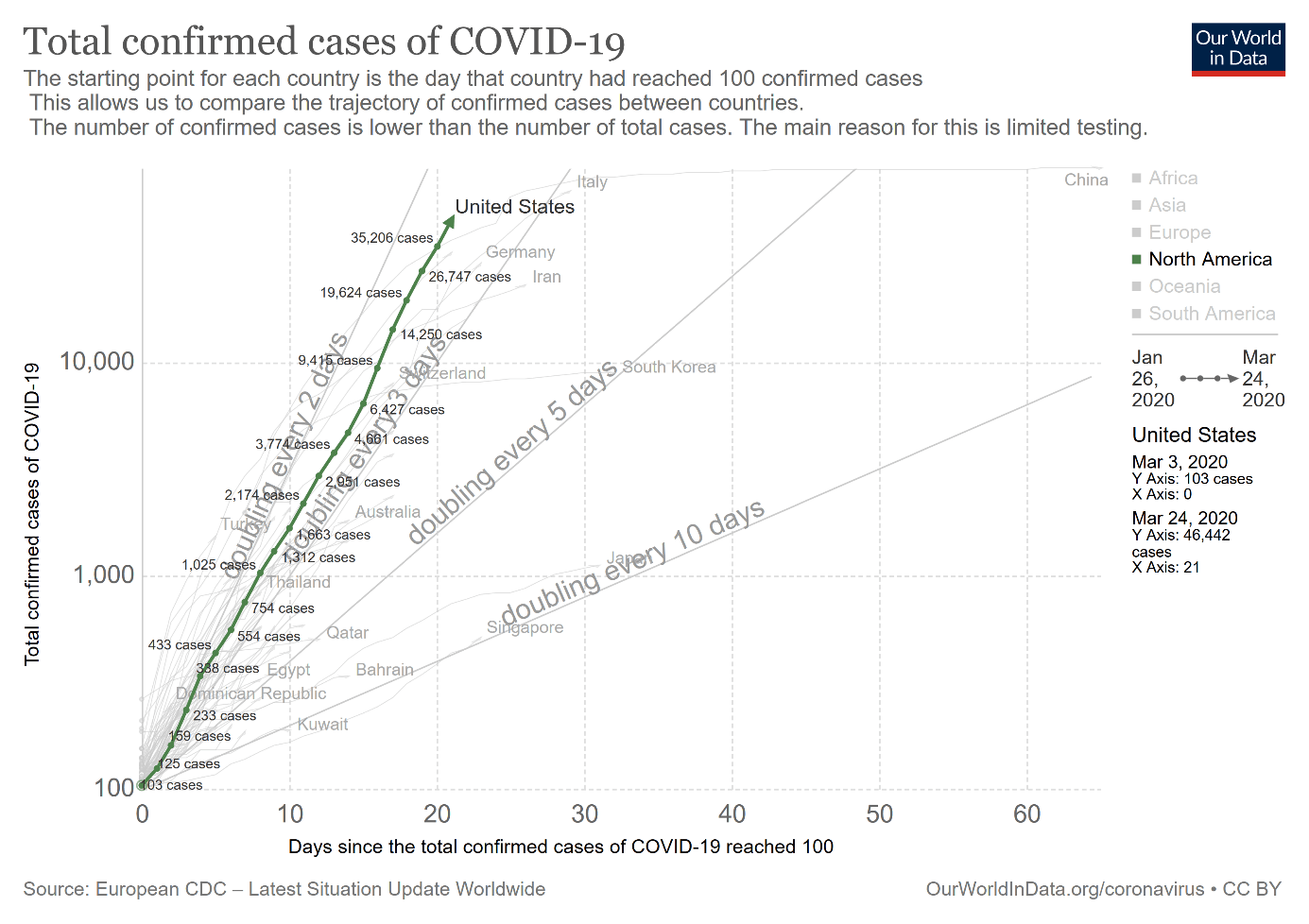 What does it all mean for the gold market? Well, from the fundamental point of view, the QE-infinity is positive for the gold prices. It’s true that each subsequent round of the quantitative easing in the aftermath of the Great Recession was less and less positive for the gold prices. And the Q3 turned out negative for the yellow metal. But this situation is really different. The QE-infinity was introduced just several days after the first round of asset purchases. And the level of fear is still high. Investors can question whether the Fed is able to help at all. And whether it still has any ammunition. But what else could he possibly do. For us, the Fed is rather impotent here, but it will still come up with new programs, nevertheless. Prepare for the NIRP, the cap on the interest rates, or the helicopter money or whichever combination thereof!

Actually, as one can see in the chart below, the price of gold has already risen in the aftermath of the Fed’s mammoth response. The yellow metal rose more than $100 overnight! What is important here, is that S&P 500 Index’s slide deepened on Monday, which may suggest that gold may be decoupling from the stock market.

However, if the stock market plunges further, the sell-off in the gold market may continue. But when the dust settles, gold should fundamentally react to the Fed’s ultra easy monetary policy and easy fiscal policy – and go up.