The next 24 hours should be an interesting one for the forex market as investors tune into the European Central Bank's monetary policy announcement and a pair of Senate votes that could end the government shutdown. The day starts with the ECB meeting at 7:45AM ET / 12:45 GMT and follows with the Senate votes around 2:30pm ET / 19:30 GMT.

For the first time in nearly 2 weeks, euro traded higher against the U.S. dollar but the rally is more of a function of short covering than ECB optimism. In fact, most policymakers from the Eurozone that have spoken over the past few weeks described Euro-area growth as slowing and expressed concerns that the risks are to the downside. We expect ECB President Mario Draghi to do the same in his press conference because not only has the economy lost momentum but a disorderly Brexit remains a serious threat to euro-area growth. Last week he said recent economic developments were weaker than expected and with uncertainties, especially global risks still prominent, significant stimulus is needed because the slowdown could be longer than expected.

Taking a look at the table below, there were upticks in German labor market activity and spending, but inflation is falling with manufacturing and business activity weakening. There's no doubt that the tone of Draghi's press conference will be dovish as he expresses concerns about uncertainty, stresses the need for continued stimulus and squashes expectations for a rate hike. If the central bank lowers its growth or inflation forecasts and Draghi focuses on weaker growth, we could see EUR/USD fall to 1.12 easily. If he tries to balance their cautious outlook with optimism (because spending and labor market activity are better), EUR/USD could extend its recover to 1.1450. 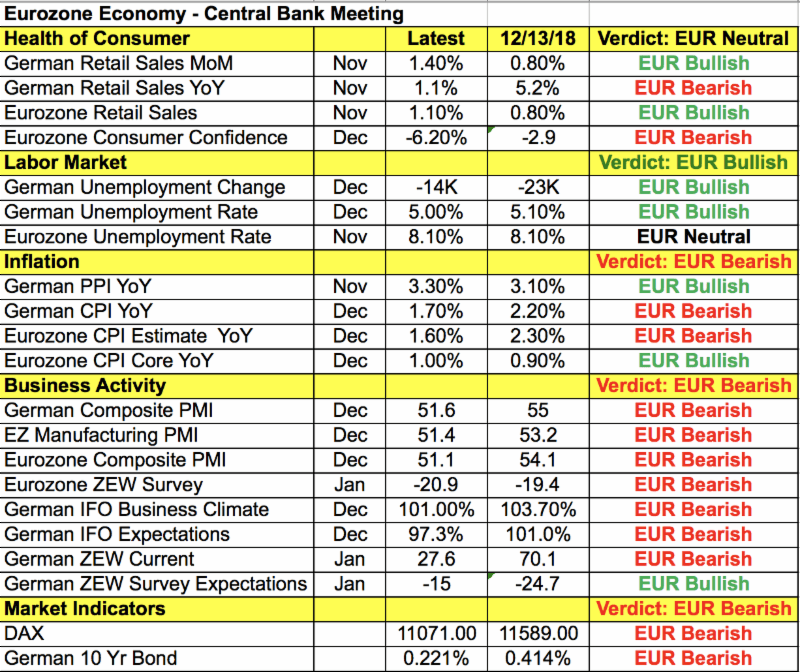 As we head into day 34 of the U.S. government shutdown, the battle in Washington is heating up. Today, President Trump said he plans to go ahead with delivering his State of Union Address next week but House Speaker Nancy Pelosi refused to allow him to deliver the speech from the House chamber (its usual venue) while the government is shut down. These two have been trading jabs all month and while her rebuff was no surprise, it shows that the tensions between the two parties are not improving. The dollar was unfazed by this back and forth between the 2 leaders. Tomorrow the Senate is scheduled to vote on Trump's latest proposal and a short term spending bill from the Democrats that would help reopen the government until February 8th. Considering that neither party has a majority and both resist the other's proposals, these votes are widely expected to fail leading to a continued shutdown. In the unlikely scenario that one passes, the dollar will soar.

Australian labor market numbers are scheduled for release this evening and despite today's recovery in the Australian dollar, we learned from the PMI reports that labor market conditions weakened significantly in the service and manufacturing sectors.If job growth deteriorates more than expected, AUDNZD could fall to fresh 3 week lows. The New Zealand dollar came within a pip of .68 cents after a stronger inflation report. Although the Canadian dollar ended the day unchanged, softer than expected retail sales drove the loonie lower. Bank of Canada Governor Poloz also said there could be some spillovers from U.S. shutdown in Canada but no real effect.

Sterling continues to charge higher in the face of Brexit uncertainty. With no progress on Brexit negotiations and no request to extend Article 50, GBP/USD hit its strongest level in 2 months. Apparently investors believe that members of Parliament will take matters into their own hands before allowing for a no deal Brexit - we'll see. What is really helping sterling is yesterday's stronger labor data and BoE member Broadbent's comment today that neutral rates are more likely to rise than fall.

AUD/USD remains on the front foot around 0.6980 at the start of Wednesday’s Asian session. The pair snapped the previous three-day losing streak the previous day after reversing from 0.6920. Though, 0.7000 threshold remains as the key resistance for the bulls to clear.

WTI: Prints another pullback from $41.00

Over the past few weeks, euro has been one of the best performing currencies. It rose to a nearly 4 month high versus the US dollar despite weaker than expected economic data.