There is a growing risk of defaulted mortgages from the US and the alarm bell is being sounded by one of the traders who shorted the subprime bond market and made millions during the US mortgage bubble of the early 2000’s. At that time US citizens were taking cheap mortgages, but then defaulted on them ultimately causing a crash in the US housing market. The ripple effect was felt all over the world.

At that time Dave Burt was credited with having great information to inform shorting subprime bonds. He knew what was going to happen in terms of mortgage loans zip code by zip code. Dave Burt now thinks that risk is growing once again.

Burt can see two problems ahead

This he sees coming from two sources: Climate change on the one hand and COVID defaults on the other.

Dave Burt’s view is that flood, fire and wind risk all end up adding to a home’s cost. Higher insurance, higher taxes and uninsured losses all add up over time. As these incremental costs rise eventually the value of the home goes down and the homes are then at higher risk of default. Previously ‘solid’ mortgages look weaker. Who wants a negative equity situation? It’s is easier to simply default and walk away. Burt now sees about 33% of US homeowners vulnerable to big losses in the value of their homes due to climate change. If true, that is a huge figure.

About 3 million mortgages are currently in Gov’t or private sector COVID bailout programmes. There are no guarantees that these borrowers will be able to keep up repayments on their loans. So, if these homes start defaulting then the current high home prices will start to fall. Defaulting mortgages causes other property prices to drop in surrounding homes. According to Bloomberg there are around 5.8 million Americans who are expecting to potentially face eviction by the end of this year. They consider themselves somewhat or very likely to face eviction. Furthermore, around half of households behind on rent or mortgage payments in Arkansas, Florida, and Nevada think there is a strong chance of eviction by early January. The CDC’s temporary suspension on evictions is due to end December 31. There may be trouble ahead in the US housing market and this is a theme to keep on track of. 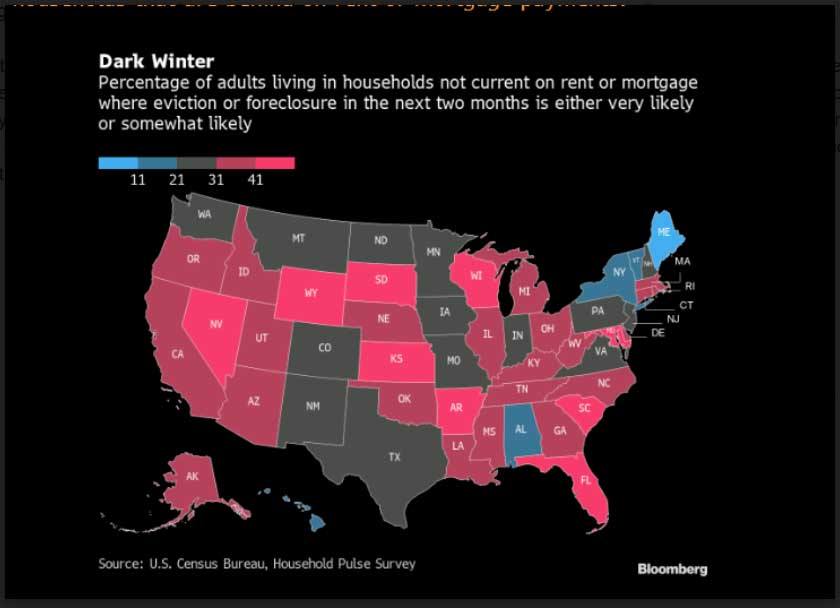 The American dollar finished the week with a firm note against its major rivals, with EUR/USD bottoming at 1.2061 and closing the week in the red a handful of pips above this last.  EUR/USD is technically bearish and poised to retest the February low at 1.1951.