Friday finish: Stocks are weaker, that flurry of pre-mkt futures buying looking like nothing more than a mirage with the cash open again getting sold into quite heavily. FTSE 100 back below its 7,000 level heading into the close so we look to see if this can hold. S&P 500 down 0.6% around 4,444 and looking again like it wants to flirt aggressively with the 50-day line. This 50-day SMA is like a long-suffering girlfriend who’s always lent on to pick up her boyfriend when he gets too giddy. He needs to be careful – too much hugging might get see him finally dumped this time. Stock markets in Europe and US now heading for a down week after looking like they’d stay above the plimsoll line earlier. US 10-year yields highest in 10 days, dollar also gaining ground to make a new 3-week high this afternoon. Risk off, safety getting some bid but gold suffering from the steeper curve and stronger USD. Oil prices off sharply in the last couple of hours to make a two-day low , with WTI just holding above $71. Debt limit is becoming something in the headlamps but not yet a major worry for markets – but it could be if we get into real chicken fight.

To next week then, and all eyes are on the Federal Reserve and whether it will use this week’s September FOMC meeting to announce its long-awaited tapering of asset purchases. Meanwhile a hot inflation reading last week will have the Bank of England thinking about whether it should be pivoting to a more hawkish position. And we look to see what progress or otherwise there is on the US debt ceiling.

Whilst markets do not expect the Federal Reserve to race towards tapering asset purchases - the soft jobs report did for that - there is a broad consensus in the market that it will begin dialling back the pace of its QE programme from November. That means this week’s meeting may be an appropriate moment for the Fed to give the market fair warning. Or not. In a sense it doesn’t matter much what they say or don’t say on tapering – the risk lies in what the Fed does or doesn’t say about rate hikes.

Last week’s CPI inflation clouded the outlook a touch – it was a little softer than expected, giving the Fed some more breathing space. More importantly, the very weak August jobs report suggests the Fed might not want to nail its colours to a November taper launch just yet. It could signal it still believes that tapering is appropriate this year without giving a fixed schedule. But we’re talking on the margins here – expectations still squarely on the Fed to taper this year, November seems likeliest. And the bounce back in retail sales in August should give policymakers some confidence that the worst of the Delta effect – a notable chilling of confidence and spending (and hiring) - is over. So too the fact jobs openings are very high and business confidence is improving again.

Investors will be most interested in how policymakers assess the pace of the labour market recovery, and whether they believe inflationary pressures are becoming less transitory than they thought. Close attention will be paid the latest round of economic projections for a guide on whether the Fed is changing its mind on the pace of inflation and growth. My own view is that we get a Fed that is more ready to accept – at least in the projections and dots, if not Powell’s words – that inflation is stickier than they thought it would be.

And the dot plot will be scrutinised of course. The last round brought the first rate hike into 2023, but there could be an even more hawkish shift calling for lift-off sometime next year once the tapering is complete. We’ve been hearing a fair bit from some of the more hawkish members of the FOMC lately about getting on with it, but the central view of the Powell/Clarida/Williams ruling triumvirate is more dovish – so dots could offer a more hawkish outlook than is the case. In March, 4 Fed officials expect hikes in 2022 and seven Fed officials in 2023. In June, 7 Fed officials see hikes in 2022, while 13 fed official see hikes in 2023. 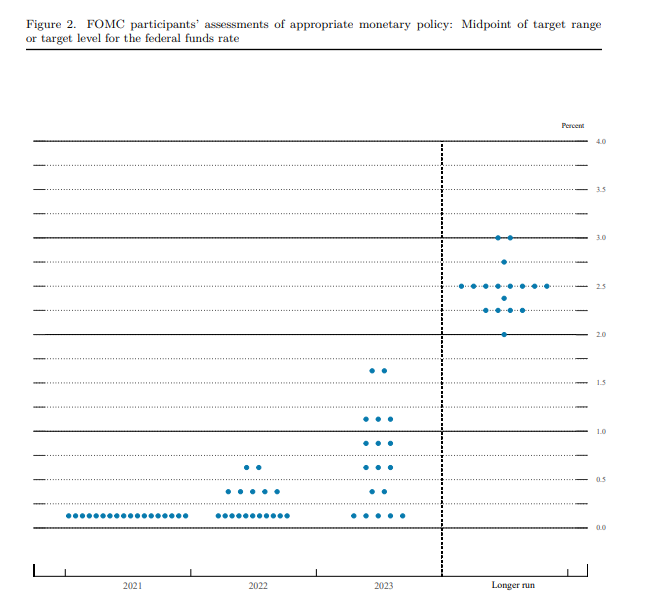 On inflation – we surely have to see some uplift to the median forecasts for 2021/2022 which would accompany a more hawkish looking dot plot/communique. The forecasts just look plain wrong now.

The Bank of England will need to respond to biggest jump in inflation on record when it convenes this week. Inflation accelerated to 3.2% in August from 2% in July, well above the central bank’s 2% target. Could this force the BoE to tighten monetary policy sooner than had been expected? A hawkish-sounding Bank of England would be a boost for sterling. In order to be hawkish enough to nudge sterling higher and show it’s prepared to kill inflation as required, the Bank probably ought to end QE now – as the now ex-MPC hawk Andy Haldane argued for last time around. There is a clear risk inflation will overshoot the 4% forecast, let alone the 2% goal. Unanchored inflation expectations are the worst possible outcome for a central bank they’ve been too slow to recognise the pandemic has completely changed the disinflationary world of 2008-2020. Hikes will be required too in the not too distant future and the bank should appreciate that a bitter pill now would be better than even harsher medicine later on. A jobs market with 1m vacancies does not suggest the UK economy is in trouble at the moment. Wage growth remains strong – albeit the picture is very complex due to furlough, the pandemic and base effects + inflation on real wages.

Does the bank go for a more hawkish signal? That is harder to say: it’s already well into a taper and markets anticipate the BoE will be raising rates 2-3 times over the next couple of years – does it need to do more than that? The question is whether the inflation ready has got the right kind of attention that it deserves or whether the BoE is ignoring the red flags. My own view, for what it’s worth, is that the Bank, just like the Fed, has allowed inflation overshoots to allow for the recovery, but it’s been too slow and too generous. Much like the response to the pandemic itself, the medicine (QE, ZIRP) being administered may be doing more harm (inflation) than good (growth, jobs).

In addition to the above, markets will be on the hook for a raft of economic data releases this week, including Thursday’s round of flash PMIs for the euro area, UK and US. Supply chain, labour shortage and inflation pressures will be closely watched – any signs of easing of these pressures would be +ve for risk, albeit we are on the margins again as the eco outlook is fairly well appreciated by the market for the time being. The Bank of Japan is due to meet, with governor Kuroda recently remarking that the central bank will further relax monetary policy such as by reducing interest rates, if necessary. Given the Fed and BoE action, the focus is more on the EZ PMIs, These have started to ease back after a strong ramp up – EURUSD tripped to a 3-week low and has been on the slide for a fortnight.

The earnings calendar is light but there are updates from Nike and FedEx among others. Nike posted very strong Q4 results in June, sending the stock to a record high. Q4 sales rose 96% against the year-ago quarter and were up 21% compared to 2019. Margins are also improving fast as the company’s pivot to supplying consumers directly pays off. “FY21 was a pivotal year for NIKE as we brought our Consumer Direct Acceleration strategy to life across the marketplace,” CEO John Donahoe said. But shares have come off lately amid worries about supply chain problems, with millions of units of lost production in Vietnam due to covid.