There will be no shortage of data releases in the coming week, with Japanese GDP, Australian job numbers and European and US flash PMIs being some of the highlights. But markets may still struggle to find new direction as there’s nothing on the horizon that is likely to alter the existing narrative on stimulus and vaccine expectations. The minutes of the Federal Reserve’s January policy meeting are also not anticipated to rattle markets. Though, in the absence of any exciting headlines, especially given the market holidays in the US and China, investors might overreact to any FOMC views that are not aligned with the dovish consensus, lifting the battered US dollar.

No double dip fears in Japan

Fourth quarter GDP figures out of Japan will kick off the week on Monday. The Japanese economy is predicted to have expanded by 2.3% on a quarterly basis in the three months to December, extending the 5.3% rebound from the prior quarter. Although Japan has been experiencing a sharp resurgence in Covid cases since November, the economy has remained largely open as lockdown orders cannot be enforced under the country’s constitution. Instead, businesses and the public are expected to follow coronavirus guidelines issued by regional authorities when a state of emergency is declared. 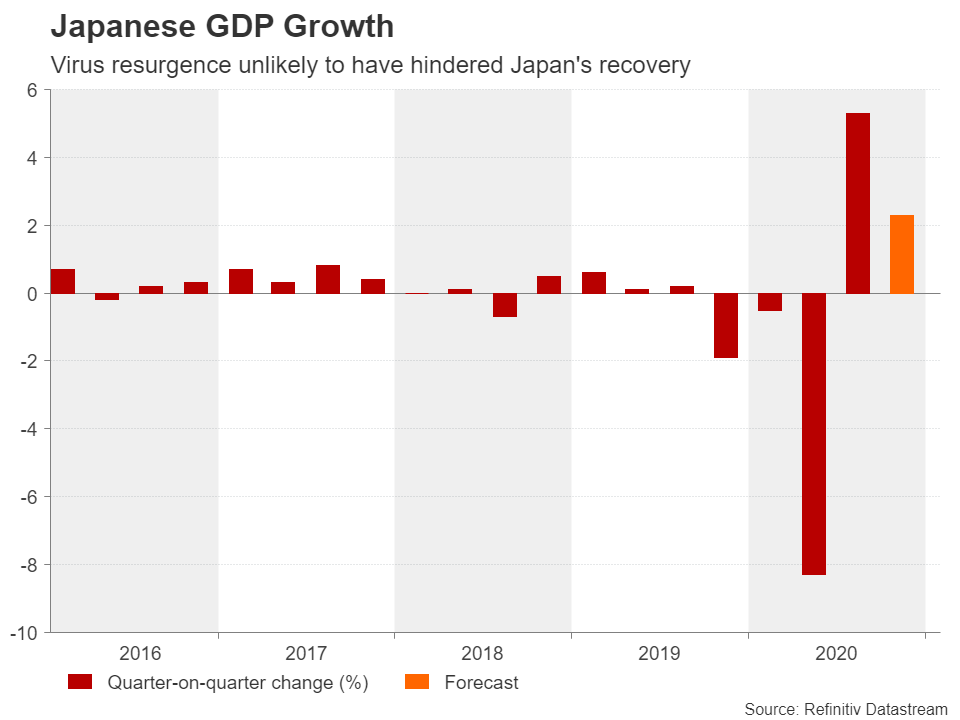 While such measures would have a notable impact on domestic consumption, ultimately, it is the strength of the global recovery that will determine Japan’s economic rebound. And as long as large trading partners such as the United States and China avoid a double-dip recession, so should Japan. Helping matters further for policymakers is the weaker yen, which has started the year on the backfoot. Unless optimism surrounding the flood of stimulus and speedy vaccinations was to change, there’s not a lot that can lift the safe-haven yen at the moment.

Other data worth keeping an eye on in Japan next week include December machinery orders and trade figures for January on Wednesday, as well as the latest consumer price index (CPI) and the flash manufacturing PMI for February on Friday.

A slowing labour market to keep aussie on edge

Another country where the recovery is on a more solid footing is Australia. However, there’s still a long way to go for the labour market to return to full health and Thursday’s jobs report will probably underline the slow progress. Employment is forecast to have risen by 40k in January, lowering the unemployment rate by 0.1 percentage points to 6.5%. 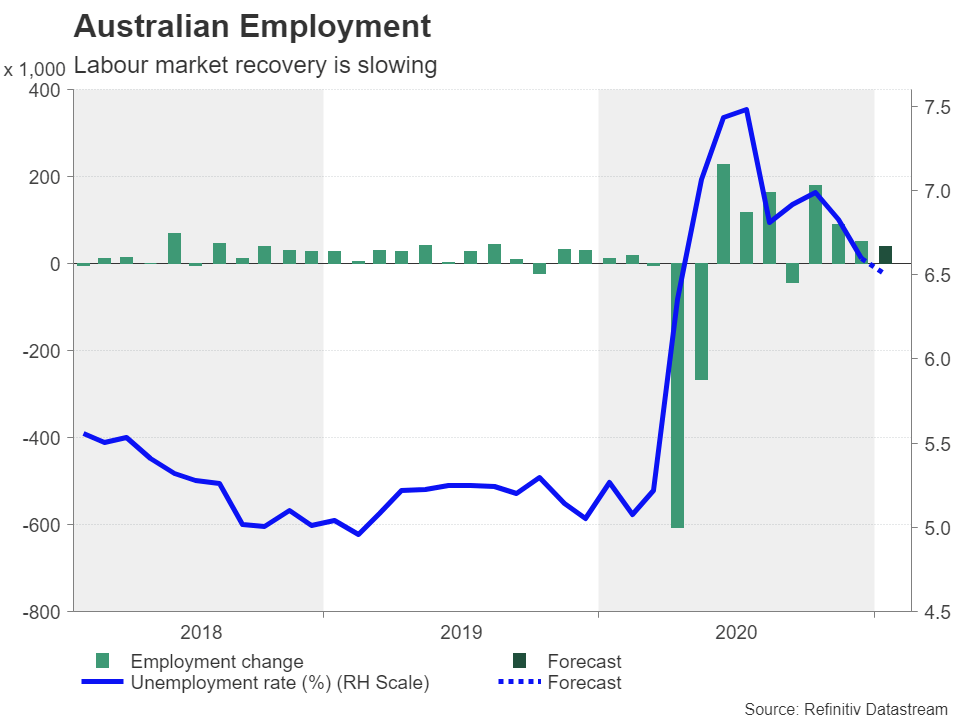 The flash PMIs and preliminary retail sales numbers due on Friday will be important too but the jobs data is the more crucial one when it comes to determining whether the Reserve Bank of Australia is likely to announce additional bond purchases during 2021. Hence, the Australian dollar could come under pressure if the employment release disappoints, particularly if there’s not a lot that can add fresh impetus to the global risk rally in the coming days.

Euro steadies but economy stuck in the doldrums

The European economy has been crippled by an endless wave of lockdowns as the infection rate remains stubbornly high, pushing back the timeline of when shuttered businesses can reopen. However, with some Eurozone countries being able to slightly ease their restrictions in February, economic activity is expected to have picked up somewhat.

If Friday’s flash PMI prints by IHS Markit confirm an improvement in February, the euro might be able to extend its week-long rebound. But a decisive upward move does not appear to be on the cards just yet for the single currency as the EU’s vaccine shambles has cast a cloud over the Eurozone recovery. 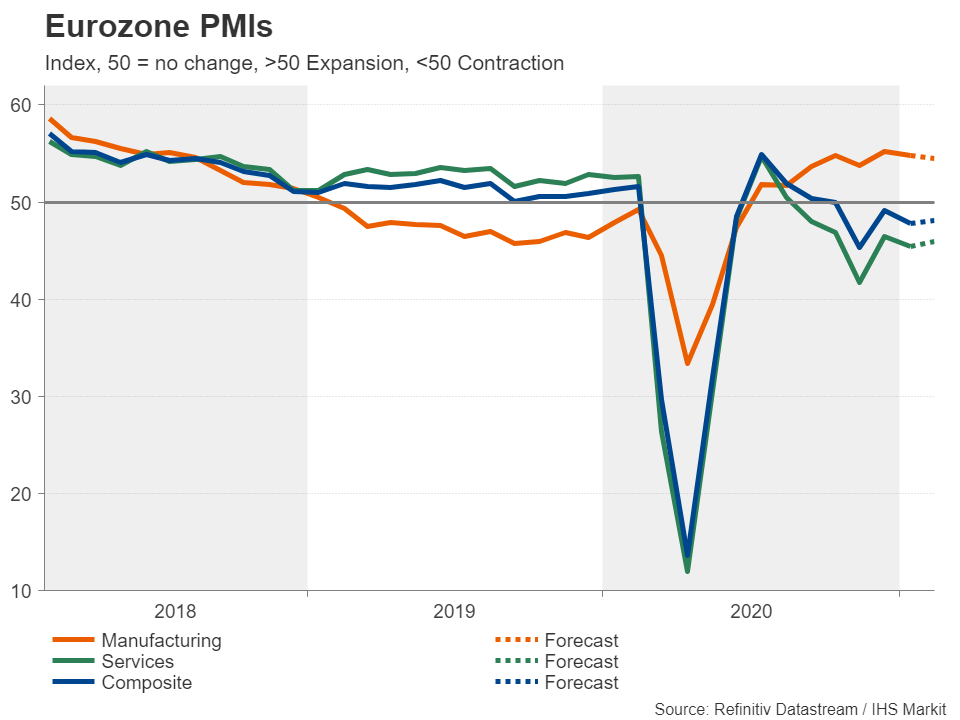 In other indicators, second estimates of Q4 GDP (Tuesday), German ZEW economic sentiment (Tuesday) and final inflation readings (Thursday) are also due but are not anticipated to attract as much interest.

Pound aims for the sky after vaccine shot

Britain’s economy is in as much a dire state as the Eurozone’s, if not more, and yet the pound is scaling three-year highs versus the greenback. Expectations that the UK’s rapid vaccine rollout will bring about a swifter end to damaging virus restrictions are what’s driving this rally. The pound should therefore stay mostly immune to dismal readings on the economy next week.

First up are January inflation figures on Wednesday. They will be followed by retail sales data for January and the flash PMIs for February on Friday. Given that England was forced back into full lockdown in January and has remained under such orders since, there’s unlikely to be any bright spots in the UK releases. 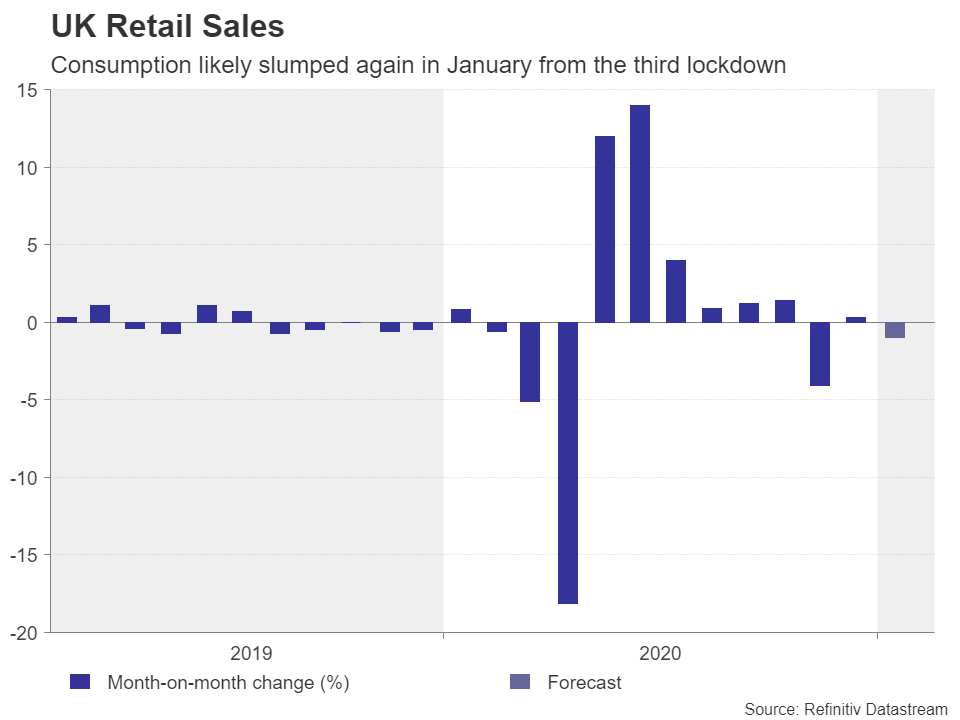 Nevertheless, hopes that the UK’s impressive vaccination drive will soon make lockdowns a thing of the past will probably be enough to sustain sterling’s upward run. That said, the currency is looking a little overstretched at the moment so worse-than-expected numbers could trigger a near-term correction.

There was a considerable slowdown in consumption and jobs growth in America at the end of 2020 – two key metrics for the health of the US economy. Following the modest rebound in January nonfarm payrolls, retail spending is expected to have done the same. Retail sales, due on Wednesday, are forecast to have increased by 0.7% month-on-month, reversing the drop of a similar amount in December.

Industrial production, also out on Wednesday, had a much stronger finish to the year and is projected to have continued growing in January. Manufacturing gauges by the New York Fed (Monday) and the Philadelphia Fed (Thursday) are seen pointing to further expansion in February. 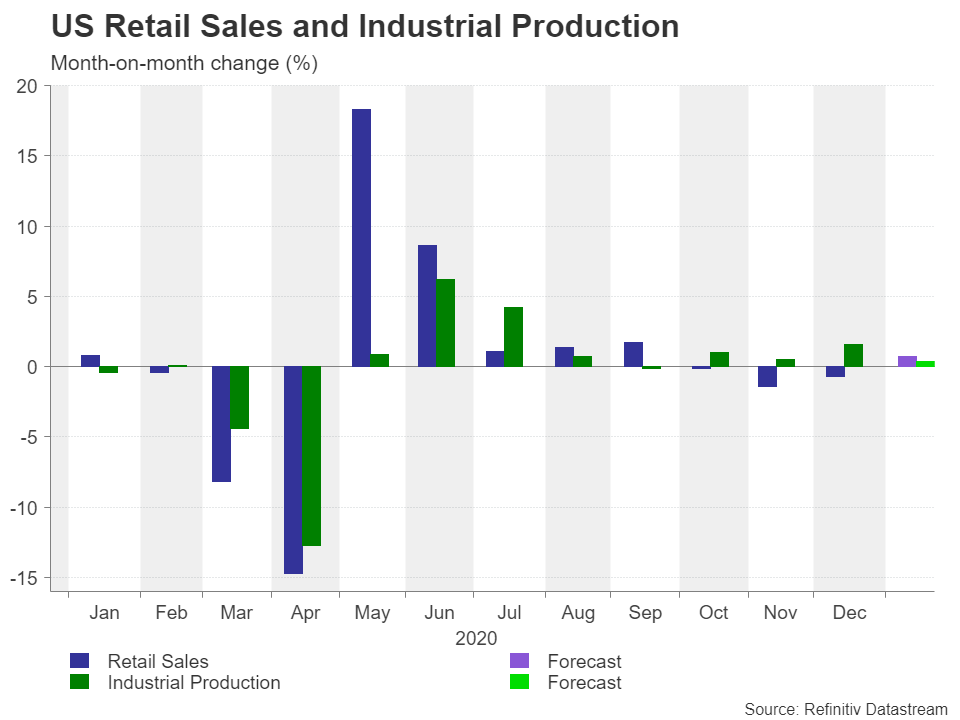 Looking at the rest of the agenda, producer prices will be watched on Wednesday followed by housing stats on Thursday, with the flash PMIs for February wrapping up the week on Friday.

While the raft of data is not expected to significantly change the current picture on the economy, a big upside surprise from the retail sales report could energize markets. January is when the $600 stimulus checks approved in December’s virus relief bill started being distributed so a strong beat is possible and could provide the sliding dollar some much needed support.

The greenback has tumbled dramatically from its two-month top over the past week and dovish comments from Fed chief Jerome Powell did not do the currency any favours either. However, some at the Fed may be a bit more apprehensive than Powell about maintaining the stimulus taps wide open with no exit strategy from the unlimited supply of liquidity. 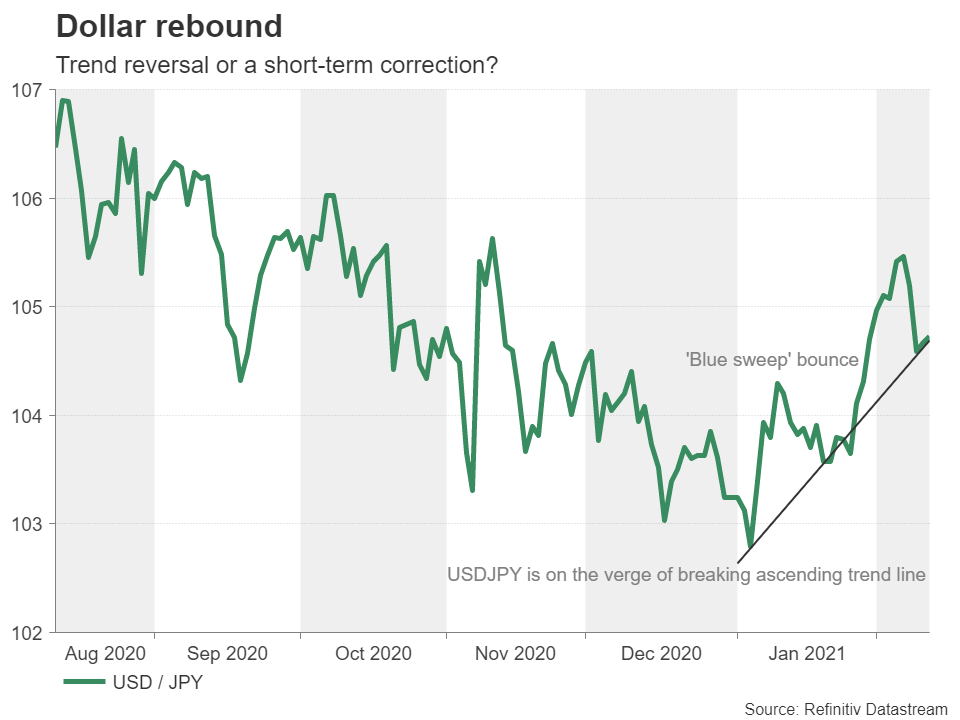 The FOMC minutes of the January policy meeting are released on Wednesday and investors will be wary about any divergence in views on inflation post the Georgia runoffs when huge fiscal spending became a near certainty. If the discussions suggest the Fed is not quite as dovish as traders have been led to believe, the dollar could resume its year-to-date climb. However, the risks are symmetrical and the minutes could simply underscore Powell’s recent remarks, weighing on the greenback.

North of the border, CPI data (Wednesday) and retail sales figures (Friday) might draw some attention to the Canadian dollar.